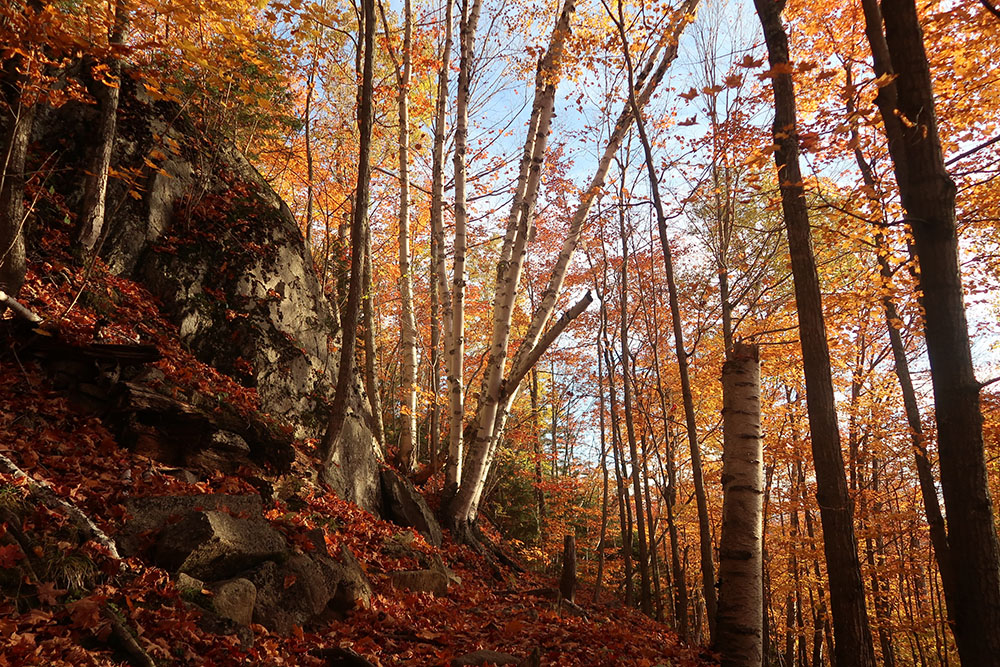 14 months had passed since my attempt to traverse the Great Range during a late June heatwave. After five summits, I ran out of steam in the col between the two Wofjaws. I was exhausted, low on water, and lugging a full menagerie of camping equipment. I decided to bail before Lower Wolfjaw.

At the time this felt like a huge bummer. The peak rose a mere 650 vertical feet above me. And I probably could have just dropped my pack at the col and ambled up and down in about an hour. I knew that coming back to snag Lower Wolfjaw would involve 12+ miles round trip. It would take 3000’ of vertical, for a summit I couldn’t enchain with any peak I had left.

I resolved to save this peak for when I had an extra day on hand. I’d make it a pleasant day hike—ideally in cooler weather. As luck would have it, the following October presented the perfect opportunity to snag “the jaw.”

The opportunity arose when I tore my ACL doing something dumb on skis. My doctor banned me from basically anything “fun” for many months. I spent a spring and summer first on crutches and then mostly just swimming. I was dying for some hiking!

In late August I came through Lake Placid and decided to try the new Van Hoevenberg Trail. That went well. In September I did a couple of quick jaunts up to the Hudson Highlands. Finally, I decided the time had come for a high peak. Lower Wolfjaw seemed like the perfect, low-key candidate: a long, but moderately pitched hike to a wooded summit. I wouldn’t be tempted to rush or over-do it.

Of the 24 high peaks I’d summited prior to this, only two were via day hikes (Cascade and Porter).  I had wisely decided to “save my ammo” on the more accessible peaks, for trips where I’d be constrained by time or weather or health from doing a full-on backpacking excursion. This, it turns out, had been a very smart move post-ACL tearing. I wasn’t ready to load my knee down with a full pack, but I could handle some day hikes!

Around 5:00 am I scarfed down breakfast at the Keene Valley Lodge, where I stayed in lieu of camping. The Lodge sits roughly 0.5 miles from the Rooster Comb Trailhead. That meant I could just walk down the roadway to the trailhead. I signed in at the register and begin my ascent.

I was actually pretty excited to be doing Lower Wolfjaw from the Rooster Comb approach. This would complete my experience on the Great Range. And it seemed fitting to get in the “minor peaks” at lower elevations: Rooster Comb and Hedgehog. Just to round it all out. I’m a bit of a stickler for completeness.

There’s also something a little magical about the Rooster Comb trailhead. It’s way down in the Valley, at just over 1000’ and begins with an adorable boardwalk over a big marsh. There’s a net gain of 4300’ in elevation along the full Great Range traverse from Roostercomb to Mount Marcy. The gross gain clocks in multiple times that number! It highlights just how rugged (if lower altitude) the Adirondacks really are.

I began the 2.5-mile, 1500’-vertical ascent to Rooster Comb. The dawn light began to slowly strengthen as I rose out of the marshy beginnings of the trailhead. Piney thicket gave way to tall deciduous trees. And the autumn colors were stunning in the early morning light.

I reached the spur to Rooster Comb, a half-mile diversion, each way. Then began the quick ascent to its summit. The morning sun enhanced the already-radiant orange foliage above my head.

The air felt brisk and cool atop Rooster Comb that autumn day. I have to say this is an excellent day-hike for anyone looking for something more mellow than a high peak. The expansive views included Big Slide, the Great Range, and a clear line of sight through the Route 73 corridor.

Atop Rooster Comb, I ran into some other hiking parties, my first encounters of the day. This Columbus Day Saturday would prove quite busy in the High Peaks.

I continued onward to the next minor summit: Hedgehog Mountain. Hedgehog tops out 800′ above Rooster Comb. The day would include one summit each in the 2000-, 3000- and 4000-foot range. Which I found slightly cute.

Ascending to this point the forest had evolved from conifer swamps near the trailhead. First, it changed to open deciduous, then to deciduous dominated by birch trees. Then it switched to just birches and conifers. I love the way the mountain flora shifts over thousands of feet.

Hedgehog didn’t feature any great views. Though it did have a big piece of bark attempting to announce the summit. It must be a bit of a bummer, being the least-awesome peak in the Great Range.

I felt relief knowing just under 1000’ of climbing remained before Lower Wolfjaw’s summit. The trail grew more rugged, with steeper scrambles. It was transforming from the pleasant rolling hills of the valley to the endless scrambles and muddy slopes of the Great Range.

Around here I ran into a party of three young college buddies hiking with full packs. We would leapfrog each other a few times en route to Lower Wolfjaw. They were headed for a full Great Range Traverse, making camp en route. As luck would have it, I’d meet them again at the Adirondak Loj two days later.

Finally, I reached the summit. And the views were actually pretty decent. It was a clear, bluebird day, with excellent seeing distance. Big Slide and the rest of the Great Range sat in full view. I could make out the slopes of Whiteface, miles away to the northeast. A bit closer I spotted Tabletop and the MacIntyre Range.

I ran into a family with a couple of younger kids at the summit and we chatted a bit. The college buddies joined us a moment later.

I sat for a bit enjoying some apple slices, cheese, and bread (the luxuries of day-hikes!). Then I began the steep descent into the Wolf Jaw col. It reminded me just how much scrambling is involved in the Great Range. Trekking poles are highly encouraged!

Soon the forest turned deciduous once more. The well-maintained trails of the AMR took me over bridges and past lush waterfalls. At a large stream bed, I caught my first view of Giant Mountain (the next day’s target).

Past the Au Sable Club

After a few leisurely miles, I reached the golf course and the clubhouse. Everything looked stunning in the fall foliage. Bright orange trees line the rolling gold course. Giant Mountain towered over everything. Many hikers walked up and down the road. And several club members drove along it as well, in decidedly fancy automobiles.

The novelty of a loop hike came with a cost. I needed to walk a few miles along Route 73 from St Hubert’s to Keene Valley. It was now midday, and the afternoon sun beat down. The valley reached into the high 70s. Halfway up the road, a driver stopped to ask if I needed a lift. I was very tempted to say yes. But I told him I was fine. I wish I had said yes.

Eventually, I came back to the Rooster Comb trailhead, where I signed out of the register and continued to my accommodations. My agenda now involved a nice shower followed by a good afternoon nap. More day hike luxuries.