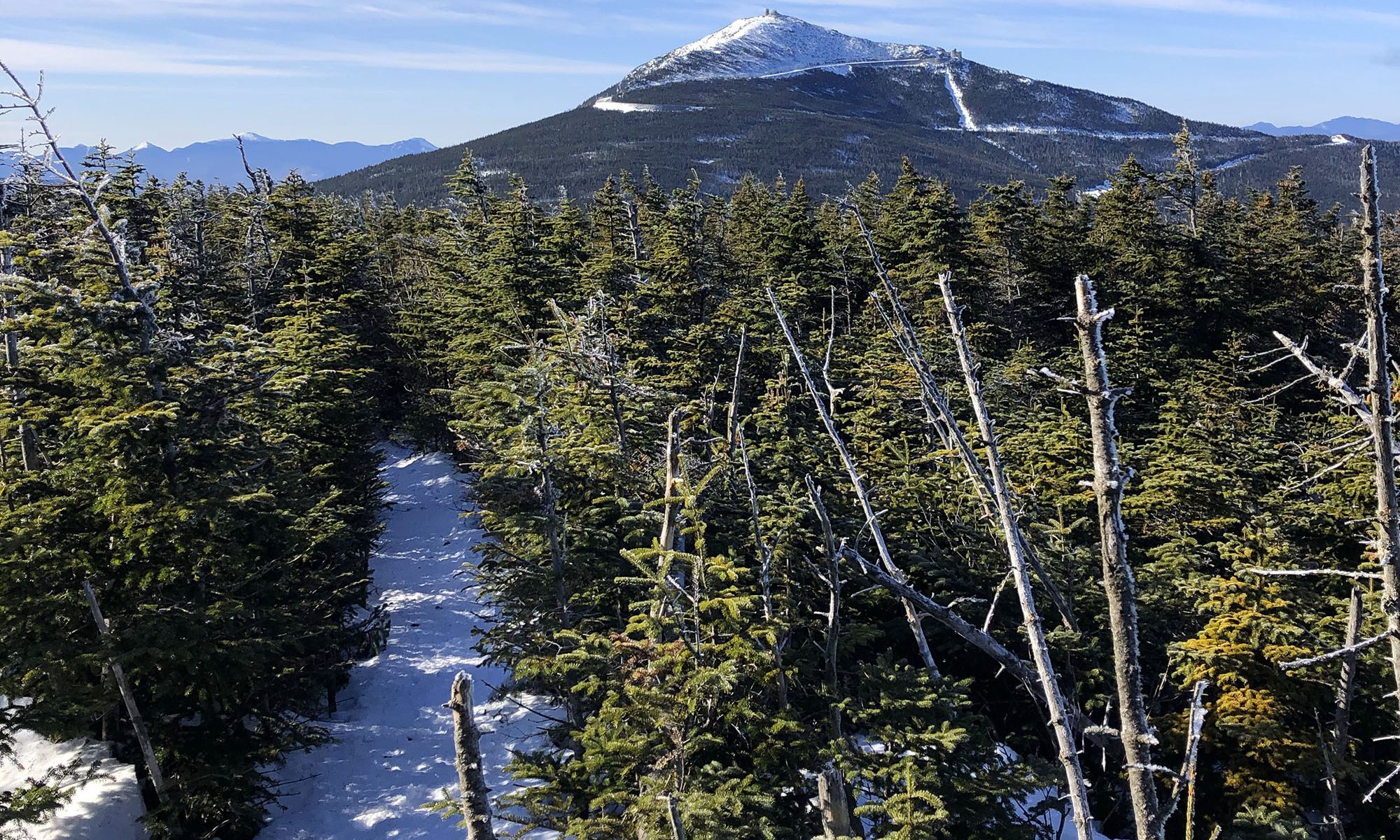 I pulled into the Marble Mountain trailhead to Esther and Whiteface around dawn. This Sunday, the Ides of March, would mark the completion of my 3.5-year journey to become an Adirondack 46er. I didn’t know much about the forty-six high peaks when I began this adventure. But I always knew Whiteface would be last.

My first 24 summits unfolded at a leisurely pace over two years—a couple of jaunts per year upstate in mid-Summer and over Columbus Day weekend. The next 22 summits would unfold over a brief, six-month stint that increasingly felt like a race against time. First I was coming back on line after an ACL tear, and, unable to ski that winter, decided to catch up on high-peak bagging. Then I had a job offer in California that would pull me across the country by May. Finally, in March, a global pandemic began to very suddenly shut down the nation. Summiting Esther and Whiteface that day wouldn’t just represent the end of my high peaks adventures; it would mark the end of normalcy in many important ways I had taken for granted.

The night before I treated myself to trout and venison at the Hungry Trout. It’s a wonderful establishment at the base of the mountain’s southern flank that my family has frequented for decades. The dining room was eerily quiet. A couple from downstate was chatting with the bartender. Whiteface ski resort had canceled lessons that weekend, and they were stuck in a bit of a bind. The gondola was not running for safety reasons. The bartender vented about a couple from Westchester (an early COVID hotspot) who had stopped in earlier that day. The whole experience felt very surreal.

I mention these things because context is important. When we step off into the wilderness, we often do so to leave issues of the modern world behind. And for most of this journey, I did allow my mind to be focused and present with the woods and the mountains. But things are messy now. They’re different.

Whiteface boasts at least three common approaches to its summit. The first heads north from Lake Placid via Whiteface Landing, and then up a slide visible from the town. This route likely requires an overnight or a traverse arrangement. The next two meet at the summit of Marble Mountain, a lower elevation ridge to the north of the summit. The first and perhaps most popular starts from a reservoir around 1300′. The final popular approach begins at the Atmospheric Sciences Research Center, at 2000′ elevation (and thus involved the least vertical).

I chose the Marble Mountain approach for a few important reasons. First, less vertical never hurts. But more importantly, I wanted my hike to sample all of Whiteface’s eclectic human history. Marble Mountain was home to the mountain’s first ski resort. Logically enough, the first attempt at a ski area on Whiteface involved its northern slopes for trail development. The resort featured a T-bar up Marble mountain and two rope tows at a much higher elevation near the summit roadway. The resort’s vertical drop was over 2500′ and it represents the largest abandoned ski area East of the Mississippi.

And so I began my journey up the former pathway of the Marble Mountain T-bar, an 800 vertical foot straight-shot to a “summit” that was really more of a terminus of a main ridge line.

The trail sported many remnants of its former purpose. Aside from being weirdly straight and wide, the trail was also periodically festooned with twin concrete footings on either side of the path: former lift infrastructure. There was also a cool tiny building halfway up for storing a ski patrol rescue shed. This trail is known to be rocky and a tad unpleasant in summer. But with winter snowpack, it was a nice chance to snap in my snowshoes’ heel locks and treat it like a mindless Stairmaster exercise. In short order I reached the ridgeline.

Along the ridge line to Esther and Whiteface

Upon reaching the ridge line, I was treated to the golden light of a rising sun, low on the horizon to the East. Down below in the valley, the Hungry Trout came into view. Immediately in front of me I saw a massive cement counter-weight from the old ski lift.

I climbed along with the morning Sun, and the views grew increasingly far-reaching. Eventually I neared the flattest section of the hike, en route to Lookout Mountain, and my final target came into clear view.

Upon reaching Lookout Mountain I came to an unusually well-marked herd path off the main trail to Esther, my penultimate summit. Esther takes its name from a young woman from Troy, NY who was first to record a summit of the peak. She was hiking (in a skirt!) to Whiteface an ended up crossing the summit en route. Until recently, this was the only summit named after a woman until Grace Peak was renamed in honor of the first female 46er.

Like most Adirondack herd paths, thick boreal forest made the route easy to follow. The path was flat-to-rolling and only lost a smidge of vertical before ascending to Esther’s gradual summit. The views towards Whiteface were gorgeous in the morning sun, and provided a somewhat unique vantage point of the more famous neighbor.

In summer you can find a memorial plaque commemorating Esther atop this summit. In winter, this plaque remained buried deep beneath snowpack.

I mentioned Whiteface features an eclectic mix of human development along its many ridge lines and faces. This makes the peak unique among the 46 summits, which as a rule are almost completely undeveloped and often quite isolated.

Whiteface’s Eastern slopes are home to the eponymous ski resort which hosted several events during the 1980 Winter Olympics. Even the older Marble Mountain ski area was built after the 1932 Olympics in Lake Placid, which did not feature any downhill skiing events. My chosen path to Whiteface’s summit passed right next to the relatively new Lookout Triple chair.

The trail first passed a spur loop of the Wilmington ski trail, that passed by an old lodge from the Marble Mountain days. It then passed through a small tree island before crossing this loop again perhaps a hundred feet from the top terminal of the Lookout Triple. I didn’t know this at the time, but this would be the resort’s final day of operation that season. The growing pandemic would bring the North American skiing industry to a grinding halt over roughly the next week.

Onward to the summit

I ducked back into the woods for the final summit push. This last mile of trail would rise over 800 vertical feet to Whiteface’s summit, high above the “summit” chair of the ski resort. The woods continued until I reached a massive stone wall that formed a bend in the road of Whiteface’s memorial highway.

In addition to two ski resorts, Whiteface features a depression-era highway to near its summit. The highway then leads to an underground elevator that rises a few hundred feet to a summit weather observatory. The elevator was the idea of then-president Franklin Delano Roosevelt. Roosevelt would thus fittingly make Whiteface the only ADA-accessible Adirondack High Peak. My 46er journey began with Skylight and Marcy, via Lake Tear of the Clouds: environs made famous by Teddy Roosevelt. It would end on a peak shaped by his relative and fellow US President Franklin.

I crossed paths with the only other group of hikers I would see that day, who warned me the summit was very cold. I had a suspicion it only seemed that way to them, since they stopped moving and failed to layer up. I’ve made that mistake a few times.

I pressed onward as the trail climbed along the ridge above the bowl containing Whiteface’s signature slides. The trees grew stunted and the summit came into clear view.

After a season of forested summits, I was thrilled to be above treeline en route to Whiteface’s solitary summit. Of the 46 high peaks, 42 of them lie in a dense clump within the High Peaks Wilderness (including the former Dix Mountain Wilderness). Another two lie just across a state roadway in the Giant Mountain Wilderness. This makes Whiteface and Esther extreme outliers, standing sentry over the northern reaches of the state. They afford unique views. On a super clear day, you can see Montreal from Whiteface’s summit.

In just over a half hour from passing the highway, I reached the summit. Bare rock poked up through the spring snowpack along southern exposures. The observatory was deserted. On a sunny, Sunday afternoon, I had the whole summit to myself.

I’ve visited Whiteface’s summit several times in summer. It’s an incredible view. Lake Placid, far below to the south, cuts such a distinctive shape into the forest. You have a birds-eye view of the Cloudsplitter gondola and the ski trails cascading down to the East. In every direction are mountains and forests covering the vast expanse of the Adirondack Park. Anyone can visit this high peak, and this high peak alone. But in winter, I think it’s a very special experience.

Farewell to the Adirondacks, for now

The three-mile and 3000-vertical-foot return to the trailhead was mostly uneventful. Unless, of course, you were my left pinkie toe, which was getting slowly sanded down by my now soaking-wet wool sock. The hike began at sunrise and finished around 1:30 pm. In the parking lot, I spotted a rather appropriate license plate (no joke!).

I was tempted to rent some skis and enjoy Whiteface two-ways that day. But instead, I headed to Lake Placid for lunch. I also didn’t know it at the time, but this was one of the last opportunities to eat in a restaurant before the lockdown.

It was nearly 4 pm when I began my drive south of Lake Placid to the highway home. The trip featured a stunning golden afternoon in the high peaks region. It took me past the road to the Loj with Marcy and Colden and the McIntrye Range in full view. The highway then climbed through Cascade Pass, then down into Keene past Big Slide, Giant Mountain, and the lower Great Range. It was a beautiful send off to the Adirondacks. At least for now.