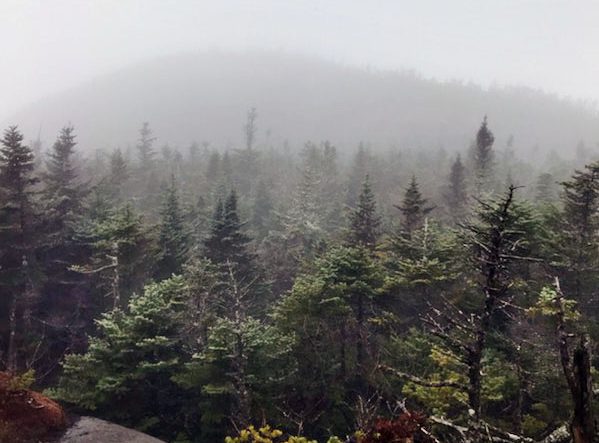 Approach from the West

Spend time exploring the Adirondacks and you realize the land within the “blue line” encompasses far more than mountains.  This is particularly true of the western Adirondacks. Here waterways like the Raquette River (French for snowshoe) meander through countless lakes and marshlands. The whole swampy, flowing mess meanders towards the St Lawrence to the north.  That’s the sort of landscape I found myself in as I drove north and westward via NY 30. I was headed towards the westernmost of the high peaks: the Sewards.

The journey took me through Tupper Lake. I stopped to check out progress on the rumored-to-reopen Big Tupper Ski Area.  The mountain seemed somewhat dormant on this rainy October Friday. But I was struck by a sign in the window of the lodge:

Those who say it cannot be done should not interrupt those doing it.

I continued along Tupper Lake and a portion of Lower Saranac Lake. Then I turned off the state roads onto the somewhat rough-and-tumble Corey’s Road.  For nearly 6 miles it wound its way into the woods. Eventually, it brought me towards the western edge of the High Peaks Wilderness. Just before reaching a large private inholding, I reached the trailhead.

The goal this rainy Columbus Day Weekend was to hike the four mountains collective known as “the Sewards”.  The remote peaks lie along two ranges. The first contains Seward itself, along with Donaldson and Emmons. The final peak, Seymour sits a bit further East on its own ridgeline.

Some folks bang these four out in one painful day. But I still felt a bit burned out from my rather long and circuitous overnight bagging the MacIntyre range. And so I decided to keep things relaxed with a two-night/three-day itinerary. I would use the Ward Brook lean-to as a basecamp.

The trip began with a roughly 5-mile, mostly flat journey to the Ward Brook lean-to.  This approach would be the only portion of the trip to take place along marked, official DEC trails.  First, the trail meandered into the woods for roughly a quarter-mile. Then it ran in a perfectly straight line, up and down the terrain’s gentle contours. This stretch passed right along the edge of a large tract of private property surrounding nearby Ampersand Lake.

It was Columbus Day weekend in the Adirondacks. And this low-elevation approach featured incredible fall foliage.  Large clearings to the north provided ample light to showcase the forest’s colors. After a couple miles, the trail met up with an unimproved roadway. The wide, dirt roadway delivered me to the lean-to with the comfort and convenience of a paved sidewalk.

I set up my tent in the vicinity of the lean-to. At least two other small groups of hikers occupied the lean-to area itself. One group would sleep within the lean-to and the other using a tent.  Being in a more remote area of the high peaks—in marginal weather—was still not enough to escape the holiday crowds of late.

Off to the mountains

Soon enough I had camp prepped, my bear canister stowed, and fresh water in my hydration pack. I took off towards the herd path to Seymour.

I was a bit nervous about finding the unmarked trail that branches off the main roadway. Gaining a herd path can be particularly tricky at lower elevations in the fall and winter. Where the forest is more open, leaves and snow can cover obvious signs of use.

Fortunately, a decently large pile of rocks made it impossible to miss this one. And soon I was traveling down a very well-trodden path up the northern slopes of Seymour.

Brilliant orange foliage formed a canopy overhead. Recent rain just made the leaves that much more brilliant. I was an idiot and left my good camera at home. So I apologize for the low-resolution pictures in this post.

The trail to Seymour begins at a gentle grade. But it grows plenty steep roughly a quarter of the way along.  The spur rises nearly 2000 vertical feet in 1.5 miles. If it was earlier in the season I might have considered this quite an arduous ascent. But after many months of solid hiking, I made quick work of the scramble to the summit.

Fall hiking is a mixed bag compared to summer.  The weather trends wetter. And with that comes potentially more mud and standing water.  This varies a lot based on the year. But in general, by late October it’s a much wetter situation than, say, August. The days also grow shorter, in rapid fashion. So always bring a headlamp!

But three big selling points make fall the absolute best time to summit high peaks. Fall brings cooler temperatures, brilliant foliage, and almost no bugs.  You read that right. I have gone many a fall hike without encountering a single mosquito. Not a one. August fares well by mosquito standards as well. But October is a sure bet.

Soon enough I had gained the ridgeline and the then the summit of Seymour. There I found one of the many brown-and-gold signs adorning trailless peaks in the region.

The summit was hardly empty.  A group of college kids were out in force. I also met another solo hiker who kindly took some photos of me from the summit.  We all chatted for a bit, and then the other solo hiker and I descended the ridge together. We chatted high peak-bagging, during a fast-paced rock hop back down into the forest.  After reaching the lean-to I bid adieu to this hiker. Then I proceeded to go about evening camp procedures.

The next morning I woke up just a couple short miles away from my next targets in the Seward Range.  This afforded me time in camp to make a nice hot breakfast. A trick I had recently learned: you can pour boiling water into standard quaker oats oatmeal packets.  No cup necessary. To avoid burning your hand, either hold the edges of the packet or wear light gloves. Believe it or not, those waxy paper packets can handle boiling water without leaking a single drop.

Rested and fed, I began the ascent up Seward.  The ascent was roughly the same difficulty as Seymour. It had slightly more vertical, over a comparable distance. But this being the second day of the journey, with my muscles recovering from Seymour. And it felt a bit more arduous.

The views from Seward were superior to Seymour’s. They now included more central high peaks. Most notably I saw the Santanoni’s in the middle distance.

I encounted some heavy traffic along the summit and ridgeline. A half dozen other groups of day hikers and some lean-to buddies were up on the ridge.  In particular, there was a three-generation group of father, son and grandfather. The grandfather had climbed Everest.

Donaldson and Emmons required a bit more work than I expected.  The ridgeline proved rugged. I thought it was roughly in line with the Dix Range (though nothing compared to the Great Range). And at a couple points, the trail dipped unnecessarily far off the true ridgeline.  Interesting fact: Emmons was the final peak the original three 46ers summited.

I bumped into a friendly young couple I had met the previous night at the lean-to, who mentioned they would be descending via a separate trail, known as the Calkins Brook herd path.  This route can turn the Sewards into something resembling more of a loop than a forked out-and-back. But for an overnight based at Ward Brook, it would add a decent number of miles to the day.  I told the couple I would try my best to get the fire at the lean-to in order for their later arrivad. They dropped down along Calkins Brook while I made my way back over Seward.

A cozy night at camp

I descended the ridge and found myself back in camp by early afternoon.  I killed some time walking east, along the old roadway. It led up a gentle slope and towards “Duck Hole.” Less than a mile from Ward Brook I found a pair of lean-tos with hitching posts for horses.  These lean-tos were entirely uninhabited. Even on this busy holiday weekend! I was tempted to keep going towards Duck Hole, but the day was growing late.

Back at camp some fellow campers and I gathered firewood. We got a good blaze going by the lean-to.  This having been the “Western High Peaks”, fires were allowed. Soon, this area would be part of the “Outer High Peaks” along with the Boreas Pond Tract and the former Dix Mountain Wilderness.  I’m not entirely sure what the new regulations entail. But my hunch is fires will remain OK. That said bear canisters (currently recommended but voluntary outside the Central High Peaks) will become required.

Much later that night, the friendly couple came back to a roaring fire, as promised.  And a bunch of us campers stayed up for a good time. We dried our boots and clothing and relaxed by the fire.  A campfire is pretty awesome.  This turns out to be a big perk of camping beyond the heavily-used Central High Peaks.

The next morning I had another warm breakfast.  Then I packed up camp, made my pack, and hiked out along the trail to Corey’s Road.  The Sewards turned out to be another successful high peaks adventure!