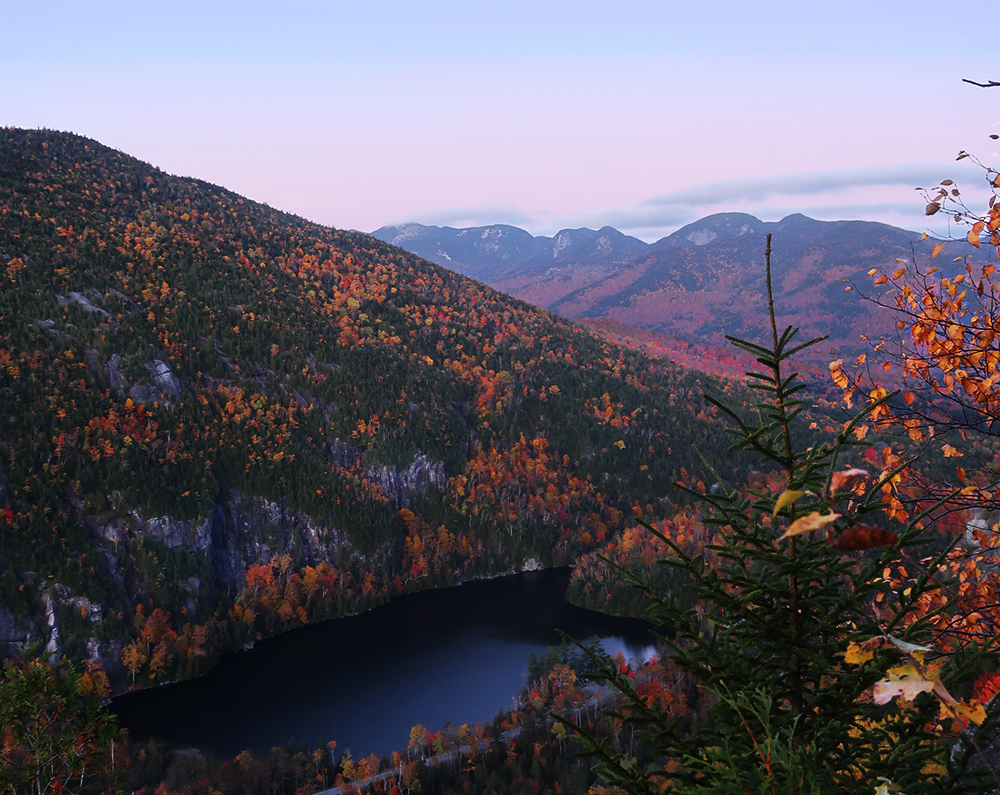 I arrived at the parking for Giant via the Ridge trail around 6 am.  The Autumn days were rapidly growing shorter. And on arrival, I was treated to a clear sky full of stars.  How beautiful! This was my second day-hike of Columbus Day Weekend, and my second high peaks adventure post-knee surgery.  Lower Wolfjaw had gone well the day before. And so I decided to graduate to Giant and Rocky Peak Ridge.

There are many approaches to Giant, but the Ridge Trail, I’m told, is the best.  It’s the shortest approach and starts a full 600′ higher than the Roaring Brook Trail.  Folks also say the views en route are the best. And from this day’s hike, I definitely believe it.

There were only a couple of other cars at the trailhead.  On a weekend like Columbus Day, it’s super important to arrive bright and early.  (And by “bright” I mean before sunrise).

I began up the trail with my headlamp on.  The fall line was very steep. The ascent to Giant gains 3000’ in just three miles—a short but steep affair. That said, this early portion of the trail features ample switchbacks.  There were also a lot of stone stairways and drainage ditches on this route. It was clear a lot of recent trail work had gone into making this epic High Peaks day hike that much more enjoyable.

Morning light began to permeate the forest. I continued upwards towards Giant’s Washbowl, roughly 700′ above the roadway.  Soon I peeled off the trail onto a ledge overlooking Chapel Pond. The word “stunning” and “foliage” get tossed around a lot these days. But at sunrise on this mid-October day, there was no other way to describe this view.

After a few minutes of snapping photos and soaking everything in, I pulled myself away from that ledge. Soon I came to the “Washbowl”, a small lake partway up the mountain. On a topo map, it really does resemble the sort of place a 1000-foot tall person living in the late 1800s would clean their face.

After crossing a small stream bed at the southern end of the pond, I began the relentless climb to Giant’s summit.  Early, and often, this trail featured large rock outcroppings and ledges. None were particularly scary and all were dry with good traction. That said, in winter, you’d definitely appreciate some solid micro-spikes.  The sun rose slowly higher above the surrounding hills. I was repeatedly treated to evolving views of the more westerly high peaks.

I can easily see why this hike is a crowd favorite.  Almost the entire hike features stunning views. A round-trip ascent of Giant clocks in just under six miles.  And at 3000’ of vertical rise, you can go home proud, knowing you climbed a solid ‘high peak’.

Soon I gained the ridge. The foliage and open ledges gave way to a narrow path through boreal forest.  The various slides of Giant’s north-western face came in and out of view. It grew colder and I pulled on an insulating hoodie.

Near the top, you pass the trail to Rocky Peak Ridge.  I decided to save that for after summiting Giant.

A cold wind whipped the summit!  After being treated to views to the West all day, it wasn’t too much of a big reveal reaching this lookout.  Thick summit krummholz blocked any “new” views towards the East. Luckily Rocky Peak Ridge would solve this problem.

A young couple sat atop the peak that morning, huddling over their breakfast.  Otherwise, it was empty. I sat on a ledge, pulled on a hat and rain jacket, and enjoyed some cheese and apple slices.  Quickly. I switched from thin gloves to ski gloves. Then I decided I needed to get moving again.

Down, up, down and up

I headed down from the summit of Giant and quickly arrived at the fork to Rocky Peak Ridge.  The mountain tops out only a couple hundred feet below Giant. The detour to RPR was not very long but involved a lot of vertical. You descend 800′ down to the col, then 600′ up to the summit.  Round trip, this added 1400’ of vertical, for a total that day of nearly 4500’.

The descent was steep, bringing back not-especially fond memories of the Great Range.  On that dry October day, it wasn’t very slippery. And with a light day pack, I was able to make quick work of it.  But my legs were definitely not enthused with the rapid, somewhat tumbling descent. I launched off small ledges and negotiated various mini rock scrambles.

Finally, to the col, and the ascent up Rocky Peak Ridge.  I passed a young woman near the col and remarked about the descent.  “I hate going down,” she said, “I would hike uphill all day if I could.”  We were in total agreement.

It was brief work to the summit, and what a view!  Rocky Peak Ridge had most of the westerly views of Giant’s peak. But then it also features a clear line of sight in every other direction too.  And unlike any other peak I’d climbed thus far, it had an amazing view of Lake Champlain. The massive lake bordering Vermont could have been mistaken for a river from this far west.

Heading a bit beyond the summit, I took in views to the south. This included nearby Mary Louise Pond.  At just under 4000’ in elevation, the pond is one of the highest sanctioned camping spots in the park. I think it’d be an amazing spot to camp out at on a clear fall evening.

There’s an approach to RPR via Marie Lousie Pond from New Russia. The route begins down along Route 9—one of the lowest trailheads in the high peaks region.  At 600’ above sea level, this makes a hike to Giant peak a full 4000’ in net vertical gain. And it involves nearly a thousand more in gross vertical. This longer approach also features great views scrambling over the delightfully-named “Blueberry Cobbles”. I’d like to come back to do that approach, probably camping out at the pond along the way. But just five months out from knee surgery, this was not the right time for such things.

The descent from Rocky Peak Ridge

Back down into the deep col between the two peaks. And then wayyy back up to basically the summit of Giant.  At this point, I began passing a lot more hikers. “Don’t worry, you’re almost down,” I would tell them. Followed by “Don’t worry, you’re halfway down.”  Followed by me keeping my mouth shut and smiling and telling them how lovely the view is from RPR.

Finally, I made it back onto the Giant trail and began the long descent towards the roadway.  By afternoon there were a lot of groups of fall hikers, a majority French Canadian.  I joked to some friends recently that when you’re at a restaurant in Lake Placid, you hear 30% French and 70% English.  But when you’re up in the mountains, you hear 70% French and 30% English.

Eventually, I made it down towards the Washbowl. I spotted some very young hikers—toddlers!—out with their parents for a day hike.  I was supremely impressed they had made it up to the ledge, 700 feet above the car park. Though there might have been some parental assistance involved.

Perhaps 30 minutes later I was back at the car around mid-afternoon. Cars entirely filled the roadside parking. Some folks were just starting their hikes.  It was another wonderful day in the high peaks.