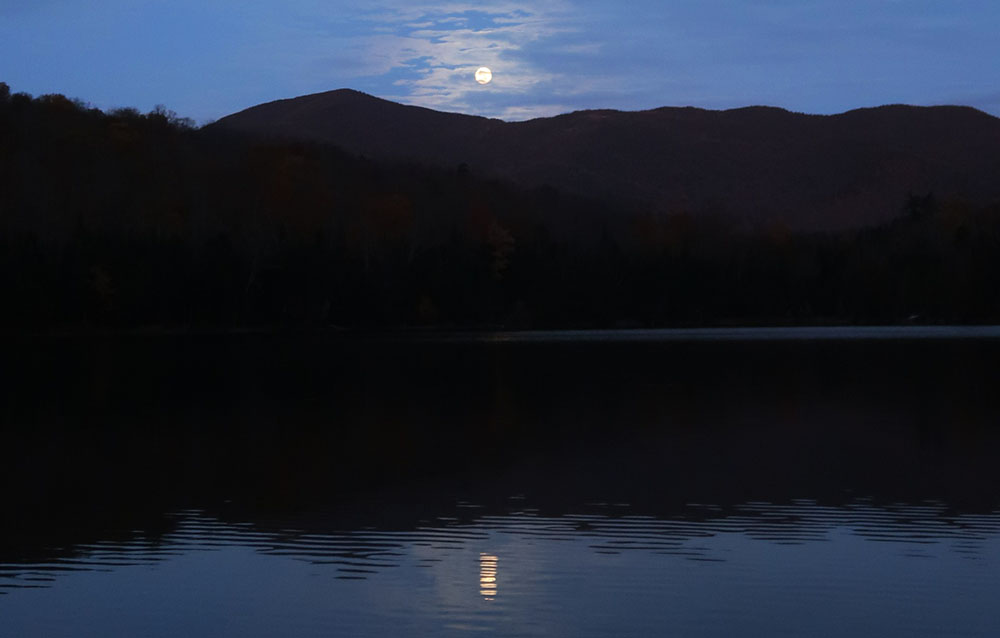 I arrived before dawn to the Heart Lake Trailhead to bag Street and Nye. It was my first time back to this popular trailhead in two years! This marked my final day-hike of Columbus Day Weekend 2019, and I was feeling sore from my adventures on Lower Wolfjaw and Giant the prior two days.

Unlike most high peak adventures from Heart Lake that begin heading south towards Marcy Dam, the journey to Street and Nye begins at a separate trailhead, heading due West along the northern edge of the lake. This took me right past the Adirondak Loj for the first time, where I was treated to a beautiful full moon over the lake.

Hitting the trail to Street and Nye

The journey to Street and Nye takes place almost exclusively along unmarked herd paths. But ironically, the most confusing part of the trip is in the very beginning when you’re still on marked trails. This is because the mountains don’t really get any acknowledgment via official DEC signage. That said, here are the steps involved:

Down to Indian Pass Brook

I followed the herd path west, away from the lake. The path was well worn and easy to follow, even though fresh autumn foliage had begun to thickly blanket the forest floor. The woods were mostly composed of tall hardwoods and open forest floor, and absent trail markers I nervously kept careful track of where I was headed. I think this trail could be easy to lose in winter, after a fresh snowfall. But most of the year, you should be fine.

The trail descends over 200 vertical feet along this first mile of the journey past the lake. It then comes to Indian Pass Brook, a fairly large waterway you cross via boulder hopping.

The brook marked the first open views of the hike, and the crossing happens at a pretty cool 180-degree bend in the waterway’s path. I’ve heard this brook can become somewhat unpassable after heavy rainfall or snowmelt, and I believe it. In winter, you also need to take care not to break the ice and get your feet soaked!

Make sure to pay attention to the cairns and ribbons placed on trees around the brook crossing. A few herd paths lead away from this spot, and I’m not sure all of them eventually merge back onto the proper path.

From the brook, the trail meandered through deciduous woods, slowly rising for a second mile. The journey definitely proved slower than walking down a sidewalk, but it wasn’t a slog by any means. Perhaps expect to take an hour to get to the steeper slopes of Nye.

Two miles in from the lake, I came to the crux of this hike: a 1000 vertical foot climb over three-quarters of a mile from the end of a small brook to the ridgeline. This represents roughly half the vertical involved that day, and it wasn’t too bad at all.

The forest slowly evolved from orange and yellow hardwoods to bare birches and deep green conifers. I had reached the signature boreal ticket that festoons all the taller peaks of the region. Midway up, I came to a small rock ledge that afforded beautiful mid-morning views of the MacIntyre Range. The silhouette of Wright Peak appeared crisp against puffy golden clouds in the background. And another massive cloud slowly lifted off the summit of Algonquin. This was easily the best view of the hike!

Soon after I ran across my first fellow hiker of the day, an older solo man heading down off the ridge. He informed me there was just one other hiker up here that morning. A big benefit of trailless peaks: fewer crowds!

A moment later, I reached the muddy intersection that splits out between Street and Nye. Folks make a big point about “S” and “N” being carved into trees marking this. But I missed these for some reason.

The journey to Nye was short and sweet, with a couple of OK views just before reaching the summit. When I finally reached the summit I ran into the other hiker who was up here that morning. We chatted and took photos of each other with the sign. I learned she was a school teacher from Albany and, unsurprisingly, a fellow aspiring 46er.

We walked back down towards the intersection, and the woman (a young school teacher from Albany) started explaining to me how much faster and easier descending these peaks was now that she had finally bought some trekking poles. More experienced hikers in the high peaks tend to impart two pieces of wisdom on me more than anything else. First, they say how awesome winter hiking is (I had yet to try). And second: they tend to rave about trekking poles. After this last of many such conversations, I decided to finally cave in and buy a pair.

I bid adieu to the other hiker at the intersection, and headed up solo to Street. The sun was now well over the horizon and filling the mossy green conifer woods with bright yellow light. Street was a longer push, but nothing crazy or arduous. While most folks claim the views are better than Nye, I definitely didn’t see this.

Having bagged these two milquetoast mountains, I began a quick descent back to Indian Pass Brook and then up to Heart Lake. My goal was to reach the car by noon so I could get back to Brooklyn at a decent hour.

Not every high peak will take your breath away, but there are far more miserable slogs than Street and Nye with even less payoff (I’m looking at you, Blake). On the whole, this was a quick and pleasant out-and-back on a crisp fall morning. Not too shabby at all.