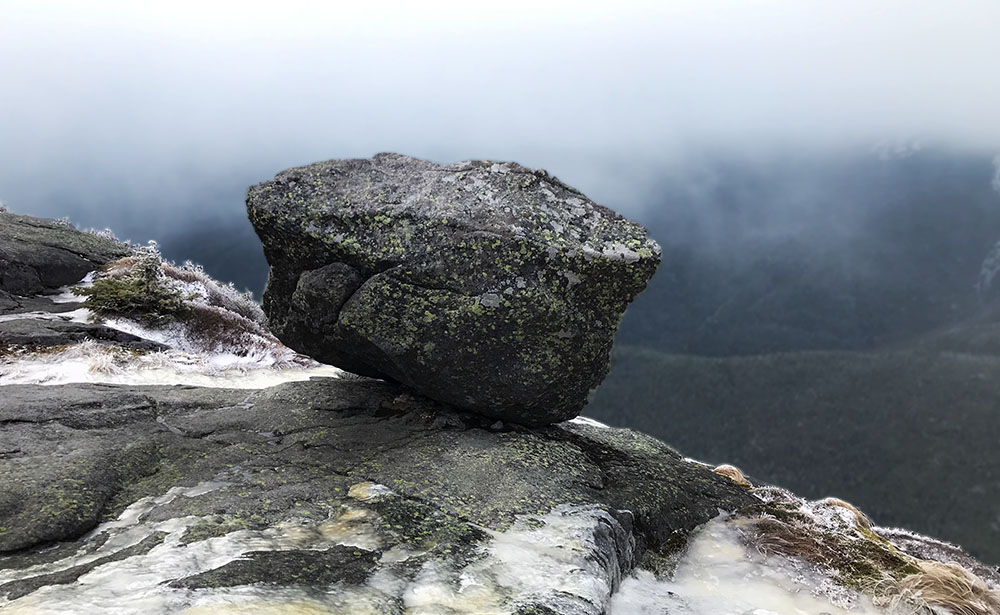 I arrived at Heart Lake before dawn on a brisk day in early November. The target, a pair of classic high peak day hikes: Colden and Phelps! My original plan consisted of hiking the Santanoni’s. But torrential rain and high winds had plagued the Adirondacks in recent days, and I decided to target a couple of peaks easily accessible from the relatively dry and well-trafficked Van Hoevenberg trail.

I signed in at the trailhead and made my way inwards towards Marcy Dam. Despite having over half the high peaks under my belt, this was only the second time embarking from this particular trailhead. The forest floor was a bit damp but devoid of big mud pools or blowdown, in spite of the recent intense weather.

Soon I arrived at the large, open flood plane created by the former Marcy Dam. Colden loomed large over the landscape, providing a clear view of the day’s objective. I peeled off the Van Hoevenberg trail, on the route towards Avalanche Pass, in search of a nice place to set up base camp.

The greater Marcy Dam area hosts a ton of lean-tos and campsites. Some feel awkwardly close to trails and each other, and others tend to fill up super fast (even on cold, rainy November days like this one!). I ended up walking about halfway down the trail to Avalanche Pass before I discovered what seemed like a relatively new lean-to in a beautiful, open conifer forest. It was well set back from the main trail, and near a noisy brook. It was perfect!

I spent the next hour or so setting up camp. I set up my sleeping system in the lean-to. Then it was off to the babbling brook to filter water and fill my hydration pack (this was so cold!). I stashed the bear canister. And finally, I prepped my much lighter pack for the journey to Colden’s summit.

Onward and upward to Lake Arnold

Soon I was off, fast and light, continuing south along the trail to Avalanche Pass. The trail rose gently through the forest, and the recent cold temperatures treated me to some early signs of winter.

Just before the Avalanche lean-tos, a fork appears for the trail to Lake Arnold. I headed down this path, which soon began to climb up towards the lake at under 3800 feet elevation.

Whereas snow cover was nonexistent at the trailhead, it became a few inches thick as I approached the col near Lake Arnold. This was the first winter scenery of the year for me. I was so struck by the gorgeous snow-laden conifers that I missed the turnoff for Colden and began to descend a solid 200 vertical feet past the col.

I must of been really out of it that morning because, after back-tracking, I managed to miss the split again! Finally, on my third attempt, now synced up with a couple of other hiking parties, I spotted an arguably easy-to-miss turn-off along wooden puncheon towards Colden.

Almost immediately after the fork, you come upon Lake Arnold, which was larger and more lake-lake than I was expecting for one of the highest lakes in the park. The lake features a couple of solid tent sites, also among the highest in the park. I think it’d be a fine place to set up camp, at least after bug season.

Lake Arnold is a stone’s throw from 4000 feet elevation, and yet you still climb nearly 1000 vertical feet from the Lake to the summit of Colden. But it was a brisk November morning and I had plenty of energy.

I ran into an older couple who warned me they had turned back before the summit due to ice. Indeed, as I climbed beyond 4000 feet, thin sheets of ice began to coat the rocky ledges of the trail. I decided it was time to break out my new microspikes.

Soon enough I came to the Colden’s open false summit. This outcropping afforded gorgeous views of the main summit, which looked quite moody amidst low-hanging clouds.

It was a bit of a scramble down off this false summit, and then a final big push to the real deal. Some serious ladders helped make the final climb a bit less harrowing.

Soon enough I had summited the main peak, where I was greeted to spectacular vertigo-inducing views down towards Avalanche Lake. It was over 1500 vertical feet from here to the scrambles and “hitch up Matilda’s” of the pass. Sadly, both Marcy and Algonquin were hidden behind the cloud cover that day. But nonetheless, the views did not disappoint.

It began the brief and not-too-remarkable journey back down to camp. Originally I had toyed with the idea of hiking both Tabletop and Phelps on that same Saturday. But Colden was plenty tiring, and I decided just to head back to camp. The thermometer would drop well below freezing that night, and I decided it was important to relax, conserve energy, and get lots of food in my system.

I went to bed early, mostly to stay warm. And in turn, I awoke very early, around 4:30 a.m. By the first dawn light, I had hit the trail light and fast once again, to bag Phelps. It was a quick jaunt back to Marcy Dam, then up the Van Hoevenberg trail. At roughly 3000 vertical feet, a marked route splits off up the somewhat steep spur to Phelps.

A decent volume of ice already coated the small ledges en route to Phelps. Micro-spikes and a newly-acquired trekking pole definitely helped in this situation. But I still slid around on the ledges a bit too much for comfort.

The summit of Phelps looked gorgeous in the early morning light. The cloud cover was patchy, and the summit afforded a new perspective on many now-familiar peaks in the region. It pains me to report my good camera had died early on this trip, so I don’t have a ton of great photos from this summit.

Snowfall heading back to the trailhead

After soaking in the views, I headed back down to the Van Hoevenberg trail. I backtracked further, down to Marcy Dam and then out to my lean-to to pack up camp. As I packed things up a gentle snowfall began to re-coat the forest floor.

By the time I reached Marcy Dam, the snowfall had grown more intense. A few fluffy inches now coated the flood plains near the old dam. The scene was beautiful! I enjoyed every moment of that walk back towards the Loj trailhead.