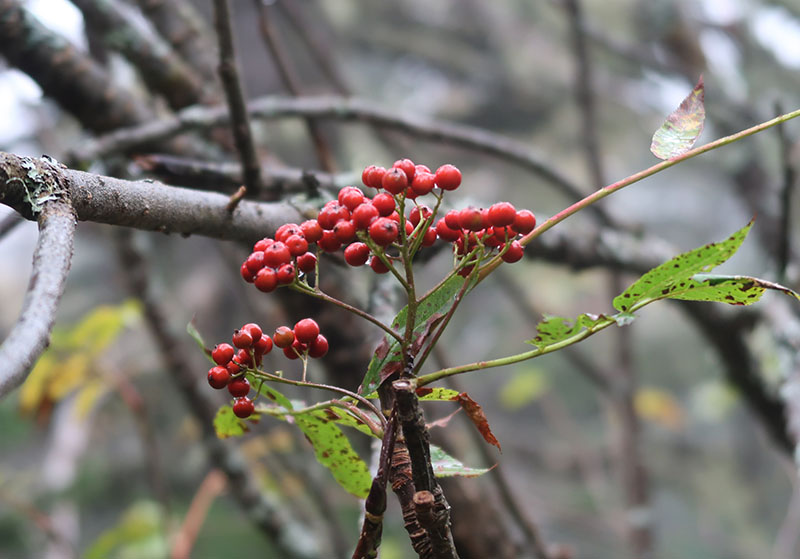 They say life is more about the journey than the destination, and that’s obviously true of the quest for 46 high peaks.  But as I push on to climbing more of the Adirondacks’ tallest mountains, I really am struck at all the weird places it’s brought me and all the interesting things I’ve seen.  My trip up Cascade and Porter certainly provides an example of that.

The “normal” trailhead for Cascade is right off route 73 just after the stunning drive towards Lake Placid along Upper and Lower Cascade Lakes.  And from that trailhead, it’s roughly 1.6 miles directly up the slopes of Cascade to its bare rock summit. This unusually easy access to a high peak with a gorgeous view makes Cascade one of the most popular hikes in the region.

But my experience with Cascade and Porter would involve none of those things.

This diversion from expectations began right away with the drive in.  It was Columbus Day Weekend, and on this Friday afternoon, I found the trailhead blockaded by bright roadside flares.   A handful of men in uniform diverted my car away from the trailhead.  Electronic highway signs explained that parking had been diverted to Mount Van Hoevenberg Olympic Complex.

I drove further along Route 73 and turned into the complex.  More uniformed men directed me into a massive dirt parking lot just before the bobsled run.  The swarm of holiday weekend hikers they expected had failed to materialize and I was one of maybe a half dozen cars.   The day had turned out to be all rain and clouds.

The parking attendant told me the trail had been temporarily diverted to run from this lot for the holiday weekend.  It added over 3 miles to the round trip journey (effectively doubling the trip length). But I was also welcome to hike Van Hoevenberg instead.

Over the river and through the woods to Cascade and Porter

The temporary trail led me through the cross country skiing and biathlon complex from the 1980 (and 1932?) Winter Olympics.  That alone was kinda cool. I saw all the narrow cross country trails through the woods. Lake Placid boasts one of the most extensive nordic trail networks in the East.   And after seeing this, I definitely wanted to check it out in the winter.

From there, the trail rose over a minor ridge, through the woods.  I now passed through a sugar maple farm.   Miles of clear plastic tubing threaded the hardwood tree trunks.  And even more cross country ski trails intersected my path, some with signs related to South Meadow Farms.  I ran into the landowner who stopped to chat for a bit. He seemed polite and conversational but definitely a bit wary of what was in store for his property this weekend.

The freshly blazed detour snaked in and out of cross country trails, along freshly tilled dirt paths.  The hasty detour had no trail signs and was marked only with some neon plastic taping.  All the saplings and bushes and branches along the trail looked freshly cut.  I was likely among the very first hikers to try this new route.

Eventually I met up with the legit trail.  The moderately steep ascent of Cascade and Porter began.  The path was washed out with lots of small boulders and fieldstones … I found myself back on the standard, highly trafficked Adirondack trails we know and love.  The route climbed steadily up roughly 2000 vertical feet towards Cascade and Porter. While the climb was steady, it never involved scrambling or negotiating any tricky bits.

Eventually, I reached the fork between Cascade and Porter.  I chose Cascade first, heading above “treeline”.  Cascade’s bare summit is not the work of harsh winds, but rather a large fire.  I’m told the views are stunning a normal day.  But today I was essentially hiking into a cloud.

That said, I enjoyed the peaceful experience all the same: I ran into perhaps just one or two other people while up there—a silver lining indeed.

I descended back into the woods, and quickly snagged Porter, a wooded peak, before heading back down.

Down the trail, back onto the detour, across the sugar works, and over the ridge back towards the Olympic complex.  Just before reaching the parking area, I noticed an odd trailer set up near the Biathlon Stadium producing loud whirring/grinding noises.  A massive hose left the trailer and went out into the stadium field, and beneath the hose was a giant pile … of snow!

Bear in mind, it was a balmy 60-something degrees that day.  I approached the machine and a young man greeted me and explained that this was a new-ish device capable of producing man-made snow in above-freezing weather.  It had made its way to Lake Placid for an upcoming cross country competition in November. The man even showed me inside the machine, where I saw the “snow” was produced when a thin sheet of water tricked down all sides of a large, cold, metal cylinder.  Just before reaching the bottom of the cylinder, as it became fully frozen, it broke apart into large chunks and onto a conveyor belt that crushed the ice down further. Hardly dry Colorado powder. But it seemed like it got the job done.

All in all, my Cascade/Porter experience was perhaps a 2.5-hour adventure, even with the long detour and stops to chat with folks.  I had a few big days coming up in the Dix Mountain Wilderness, but this hike just felt like a nice, gentle warm-up round. It’s easy to see why Cascade is an extremely popular first-peak for hikers visiting the region: big payoff with just a short burst of strenuous hiking.  While I still can’t tell you what the views are like from Cascade, I’m more than satisfied with my somewhat unique experience on these two peaks. All part of the long and winding road to 46 summits.