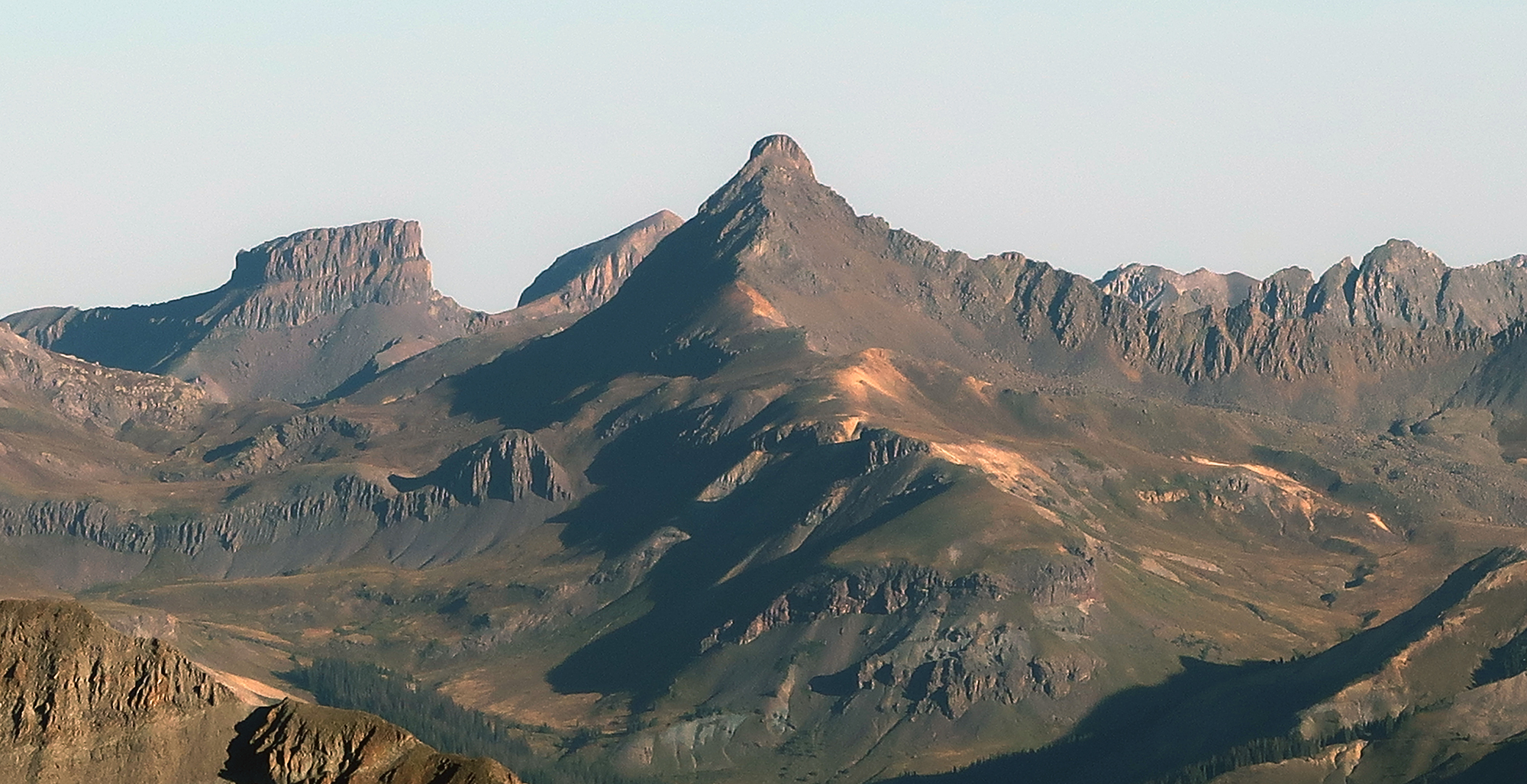 Lake City and the San Jauns

The late afternoon sun poked in and out of view as I sped along Colorado 149 into the heart of the San Juan Mountains. It occasionally ducked behind increasingly rugged mountain peaks and silhouetted stands of aspens. Suddenly, the road dipped into a canyon directly beside the Lake Fork of the Gunnison. It was the Friday of Labor Day Weekend, and I saw maybe two other cars.

After hours of driving, I arrived in the narrow valley holding Lake City. The landscape seemed unexpectedly lush: towering deciduous trees lined the gridded streets as I slowly cruised into town. Should I have been surprised to find yet another gorgeous, charming hamlet in the San Juans? Maybe not.

I checked into the cute motel I had booked and set an alarm for 3:30 am. I wanted to get an early start on my target the next morning. The trailhead for Wetterhorn Peak sits under 12 miles from town. But the rough, 2WD dirt road can easily take an hour even with summer conditions.

I arrived at Matterhorn Creek around 5 am and began the mellow approach towards the upper basin.

I’ve visited many places that at one time or another claimed to be the “Switzerland of America”. Perhaps nearby Ouray makes the strongest claim. But Lake City has two peaks named after famous counterparts in the Alps: The Matterhorn and The Wetterhorn. The latter counts among Colorado’s famed fourteeners. And that was my target for the day.

I covered the first 1500 vertical feet under cover of darkness. This brought me to treeline, around 12,000′.

The Wetterhorn marked my first solo “Class 3” ascent. That meant gaining the summit would involve full, hands-on scrambling, a touch of route finding, and some not insignificant moments of vertigo. As such, I noticed the “crowd” on this peak differed markedly from less technical fourteeners. There were no large groups and no dogs. The demographics skewed male. And plenty of folks were ascending solo (myself included).

My fellow climbers were also very friendly and sociable. Early on a young man who had driven up from Texas began chatting me up. We hiked together for perhaps a half hour before I admitted I needed to take care of some business in the nearby bushes. Such is the reality of starting a hike at 5 am.

Shortly after regaining the trail, another hiker fell into stride with me and we chatted up until the 12,000 feet mark. This time I simply admitted I needed a break to catch my breath. I’ve found on these less crowded peaks I tend to be among the least aerobically fit.

The Sun finally poked out from behind nearby peaks. It backlit nearby Uncompahgre Peak, accenting its impressive cliff bands and flat top. It bathed Wetterhorn Peak in a golden alpenglow.

I trudged slowly onward towards the high ridgeline. Then I reached the 13,100′ elevation saddle before the “technical” portion of the climb. I saw a few hikers resting and refueling here. It was a summer holiday Saturday, so likely among the most heavily trafficked days on Wetterhorn Peak. That said, I ran into a grand total of maybe 30 people that day.

I donned my helmet and put away my trekking pole. Finally, it was time for some scrambling! From the saddle, the trail headed straight up a steep pitch of loose dirt and scree. This was, fortunately, the only notable stretch of loose scree on the route.

I won’t give a blow-by-blow of the ascent. If you want to summit this peak, however, you definitely should download a detailed set of steps. “Route finding” was never an issue for me on this peak. But I could see it causing problems (particularly in less ideal weather).

The route grew steadily steeper and more exposed as I went. You scramble up a gully/ledge system towards a “rock rib”. Then you have a choice of downclimbing through a V-notch or going around some rocks. I chose the notch. Then you ascend a similar system towards the “prow”.

The route felt, in a word, awesome. The rock felt grippy and featured ample cracks and crevices for your hands and feet. I don’t remember happening upon a single loose boulder or dirt slope. At least not on the steep portions. The safest route seemed obvious at all times. And everyone around me seemed to be having a blast too.

A couple of lower-angle traverse sections included a bit of heady exposure. That said, there were no moves that really got my heart racing. In fact, I felt a lot more nervous on the crux of nearby Sneffels, a so-called “easy class three” ascent. Of course, that might simply reflect another year of hiking and climbing in Colorado. Our perceptions of “steep” and “scary” can evolve with experience.

Whereas several hikers passed me on the lower approach, I began to regain ground on the scramble. I passed both the folks I had chatted with earlier that morning. My hours spent in the climbing gym each week, working pitches and boulder problems, had apparently paid off.

I’ve also found more technical ascents distract your brain from thoughts like “I’m tired” or “I need air”. You’re fully engaged with each hand- and foot-hold. The climb demanded my complete attention.

Finally, I reached the summit. Views stretched for many miles in every direction. I saw nearby fourteeners like Sneffels, Uncompahgre, and Handies. Far to the north, I saw deep valleys and the distant Elk Mountains.

I sat for a while and enjoyed some refreshments. There were high fives and fourteener banter amongst my fellow summiteers. “Longs was way easier.” “I’m gonna try for Uncompahgre this afternoon!” Etc …

I decided to try and beat the “traffic” and head down before the other climbers. The route proved just as manageable and high quality on the descent. I made progress almost entirely face-forward, down climbing on a couple of dicier moves.

Before long the most technical portions fell behind me. A comparatively mellow descent to the trailhead remained.

I passed a couple of late-risers on my way down. But most folks had begun well before dawn. The forecast called for cloud cover by mid-afternoon, but these climbers still had hours to spare.

A couple of climbers stopped to ask me how difficult the route was. How did it compare to Castle Peak, a popular “Difficult Class 2” hike? I told them it was definitely a step up from that. But maybe not a big step.

Overall, I thought Wetterhorn met me exactly where I wanted it to be. It was a true scramble—an honest-to-god class 3 ascent. But risk factors remained pretty low. The route seemed clear. The rock was solid. The whole affair involves a manageable 3500 vertical feet of ascent. And you can descend directly from any point along the hike. If you want to push into class 3, Wetterhorn Peak seems like a fine start.

I enjoyed every moment of the descent back to the trailhead. The sun rose higher, and the air grew quite warm. That said, alpine flora had already turned to burnt shades of red and orange. It was Fall in the southern Rockies. It was a stunning day.

One Reply to “Wetterhorn Peak (Colorado)”