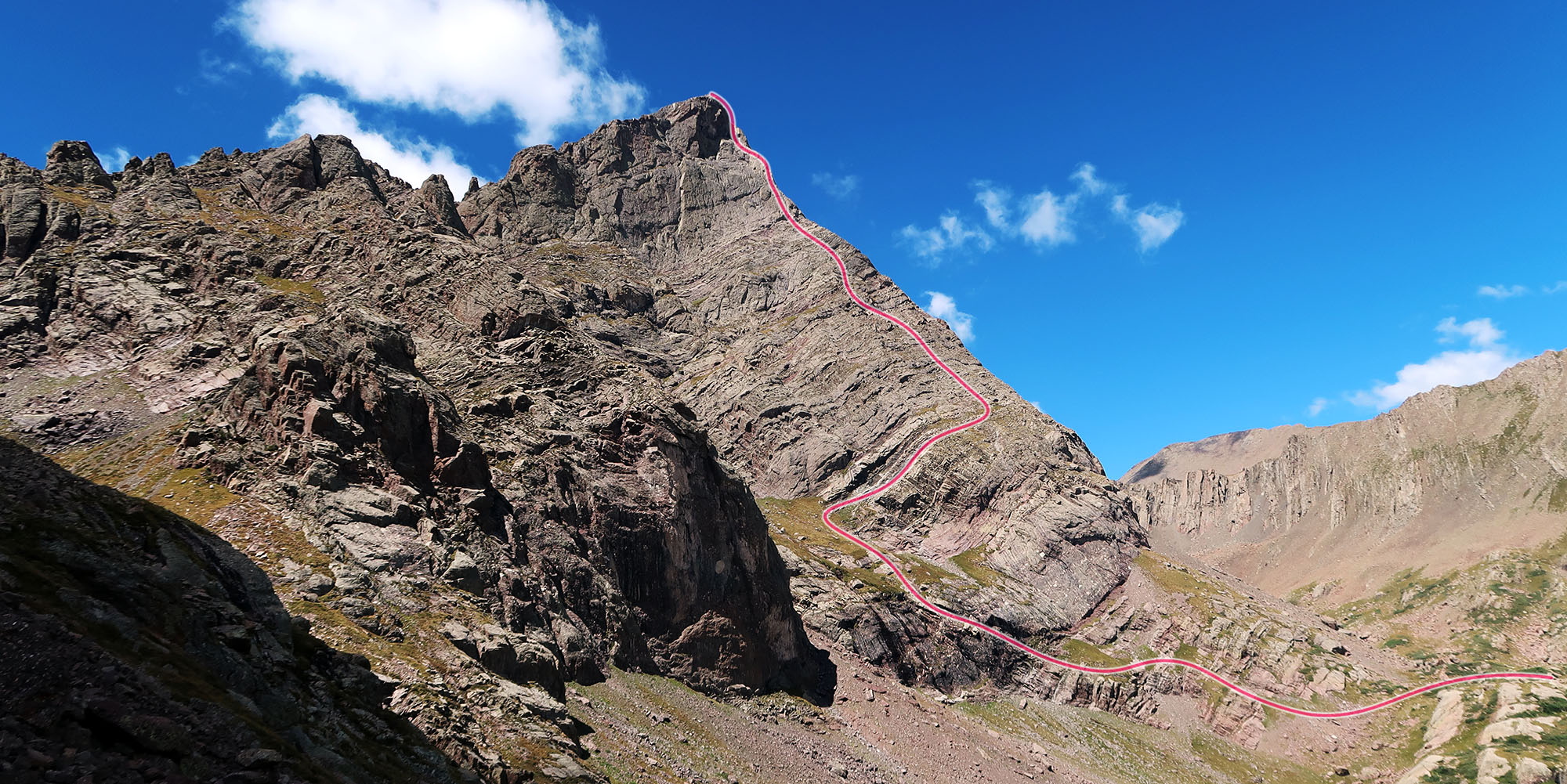 Our truck ambled slowly up the rough road to the South Colony Lakes Trailhead. It was mid-morning on a gorgeous, sunny Saturday in late August. Puffy white clouds had begun to coagulate as we donned our packs and divvied up the climbing gear.

Then we were off, up the old access road into the Sangre de Cristo Wilderness. Our target was Crestone Needle, among the most rugged and charismatic of the Colorado Fourteeners. While you can ascend this peak via a Class III-IV rock scramble, our objective involved ascending the famed Ellingwood Arete (or Ellingwood Ledges).

The backpacker-friendly approach slowly climbed 2000 vertical feet, from the “upper trailhead” around 10,000′. The first half of this ascent runs along an old dirt roadway. The second, shorter half, rises towards the treeline along a proper single-track trail.

Before long, the towering mass of Crestone Needle came into view. I could see the profile of the route we’d be climbing the next morning.

We arrived at the upper lake, and our chosen campsite, just as the sky began to threaten rain. The lake sits at 12,000′, a mere 2,200′ below Crestone Needle’s summit. We made quick work of setting up camp. The goal was to keep the gear (and ourselves) dry.

Crestone Peak and Crestone Needle form a spectacular, rugged ridgeline of solid rock jutting out from within the heart of the Sangre de Cristo range. Crestone comes from the Spanish word cresta meaning comb or crest, as in a rooster comb or an iguana’s profile. The Crestones certainly fit this description in my view. Then again, conflicting evidence suggests the name originally applied to nearby Kit Carson Mountain.

Their sheer profile of solid rock presents as something of an anomaly within the Rocky Mountains. Most of the Colorado fourteeners seemed formed of loose, treacherous, rotten rock. From Princeton’s Chalk Cliffs to the Maroon Bells, rocky edifices seem to crumble beneath misplaced feet.

But geological history has blessed the Crestones with sturdy, grippy, delicious rock. Here several-million-year-old mud has cemented together ancient boulders into a somewhat unique Crestone composite. We would spend a majority of our Sunday slowly climbing up this excellent rock.

Among all the prominent Colorado Fourteeners, Crestone Needle features the latest official ascent. Albert Ellingwood and his longtime climbing partner, Eleanor Davis made the first recorded summit in 1916.

Their ascent roughly followed the current “standard route” to the summit, which climbs up the somewhat gentler southwestern face of the peak. Before summer 2022, 14ers.com labeled this route Class III, meaning a somewhat less-technical scramble.

That said, the recommended Class III route involves traversing out of multiple deep gullies are key moments in time. And climbers have sometimes missed the exit point, with occasionally fatal consequences. Crestone Needle ranks as the fourth deadliest 14er, as of 2019. As of late August 2022, the website re-designated it a Class IV peak (more technical/near-vertical scrambling). And it now recommends a more direct if somewhat steeper final ascent.

While we would descend this standard route, our ascent would “kick things up a notch.” We would elect to take the Ellingwood Arete, or “Ellingwood Ledges”, a technical rock climbing route first accomplished by Ellingwood and Davis in 1925. Their pioneering route now ranks among the Fifty Classic Climbs of North America. Just four exist in Colorado, with the other three in Rocky Mountain National Park.

When we made this ascent, I personally knew precisely nothing about trad climbing. Climbing in a gym or outside on a crag with fixed anchors and bolts, you merely need to place carabiners and clip in a rope. In “traditional climbing” the route remains nearly devoid of fixed bolts or anchors. Instead, an experienced climber places nuts and cams and builds their own anchors.

And so I hired a guide. I had climbed with him before on the Maroon Bells Traverse, a less ambitious but equally treacherous Class V route near Aspen. We had also spent a day practicing multi-pitch climbing ahead of this ascent. He led every pitch up the mountain, placing cams and building our anchors. I belayed him on his ascent, and then “followed” up, recovering the equipment from rock crevices.

I hope to gain the experience to lead a trad route one day. But there is a whole science—and art—behind safely and effectively placing protection. It’s time-consuming and requires substantially more strength than simply climbing on top rope (or cleaning a route, which itself requires a bit more strength and patience).

We relaxed in our tents for an hour or two, waiting for the rain to pass through. Around 6 or 7 pm it finally abated. The sun poked its head out for another hour or so, and the dry alpine air slowly dried out the rocks around our camp. Then we made dinner and hit the sack early. The plan involved leaving camp around 4 am. My guide predicted it would take us roughly six hours to summit. Rock climbing goes a lot slower than hiking.

We began with headlamps at 4 am on the dot. We had roughly two hours before the glow of dawn would reliably overpower our battery-powered beams. In that time, we planned to ascend roughly half the route.

The Ellingwood Arete is not really an arete (a sharply angled rock protrusion, with multiple faces … like the prow of a ship). Rather the lower 75% consists of steep, grassy ledges that involve a mix of scrambling and brief pitched climbing. How much of this involves anchors and rope depends on your exact route, experience, and risk tolerance. The final 25% involves 3-5 full-on rock climbing pitches.

This mixture of scrambling and rock climbing greatly accelerates an ascent of the peak. This accounts for why a climb roughly 60% as tall as El Capitan can be ascended in just a few hours by experienced climbers. Along the lower sections, we moved simultaneously up steep grassy ledges. Towards the upper portion, the guide started building anchors so we could safely gain a few sheer cliffs.

Around 7:30 or 8 am, we reached the final 500 vertical feet of the route. Here at last, the ascent morphed into full-on, multi-pitch rock climbing. You can break this out into 3-5 pitches. We kept it conservative, with five pitches. The first few rate as 5.6 grade.

The 5.7 crux features a bit of “crack climbing” and hand jamming. Being outdoors, rated nearly 100 years ago, devoid of bolts, and at roughly 14,000′ it’s a good deal harder than a typical gym 5.7 route. I can reliably, and cleanly lead a 5.10a in the gym, and I found this pitch worthy of my fullest energy and attention. Cleaning trad equipment requires a solid stance and 10-30 seconds of using one hand (usually my left) to remove cams and slings from the rock.

On the final pitch, I also noticed something odd. A few of the pieces of protection my guide had placed did not require cams. Instead, quickdraws attached to a couple of weathered, metal pitons. Later, I learned these pitons had been placed by Ellingwood himself, back in 1925. We were climbing amidst a bit of alpine history!

I felt enormously proud when I reached the final anchor without taking any falls. We had made decently quick work of things, finishing the pitched climbs in under 6 hours from leaving the tents. Our early start meant we ran into no one else along the route. There was one experienced party below us, and the leader had just barely caught up to us at the base of the final pitch.

The Ellingwood Arete/Ledges involves an intense level of commitment. Rappelling down a trad pitch with no fixed anchor can mean losing gear. With upwards of three pitches on this route, you simply cannot bail from high up the route. If the weather turns en route to the summit, you still basically need to summit. And rescues on sheer cliffs near fourteen thousand feet stretch standard helicopters (and rescue teams) to their operating limits.

Thus with stormy weather rolling in around 3 pm, we knew we had to keep making good progress. Even the standard route is no fun to descend in the rain.

We finished the final crux pitch a bit before 10 am, with ample room for our descent. A short stretch of steep scrambling later we reached the summit.

We reached the summit, unroped, and exchanged high fives. A handful of climbers from the standard route were relaxing on the sunny boulders. It was time for a hard-earned fruit snack.

The Sangre de Cristo range looks like something straight out of a Tolkein map: a narrow, linear stretch of incredibly tall and rugged peaks, running through the flat high plains of south-central Colorado. And from Crestone Needle, I could see easily into the deep valleys on either side. To the East were Westcliffe and the Wet Mountain Valley. To the west, Crestone and the San Luis Valley. Great Sand Dunes National Park stretched out through this region. The dunes rise 700′, equivalent to a midtown Manhattan skyscraper. But from our vantage point, it looked like a child’s sandbox.

The equally rugged Crestone Peak and Kit Carson Mountain unfolded to the north. Further afield we could see Blanca, Culebra, and other fourteeners. A wet summer had made timing this climb challenging. But it also meant almost no wildfire smoke to obscure our incredible views.

Next, we began our descent down the standard route. Or more precisely, what had been the standard route up until just a few days ago. This meant class three gullies with some key exit points to avoid getting cliffed out. In my opinion, the route finding wasn’t nearly as treacherous as folks talk it up to be. But I can see how someone not paying close attention, or without prior knowledge, could quickly get into trouble.

And, like the Needle in general, solid, grippy rock formed these gullies. I never once worried about loose scree or dirt betraying my stance. Everything about this route felt solid and super fun.

We reached the mellow ridgeline to Broken Hand pass. Now a mostly class two trail would deliver us back to South Colony Lakes. A couple of hours later we had packed up camp and began a surprisingly long trudge back to the trailhead. We even beat the rain. It was an incredible day on an incredible peak.