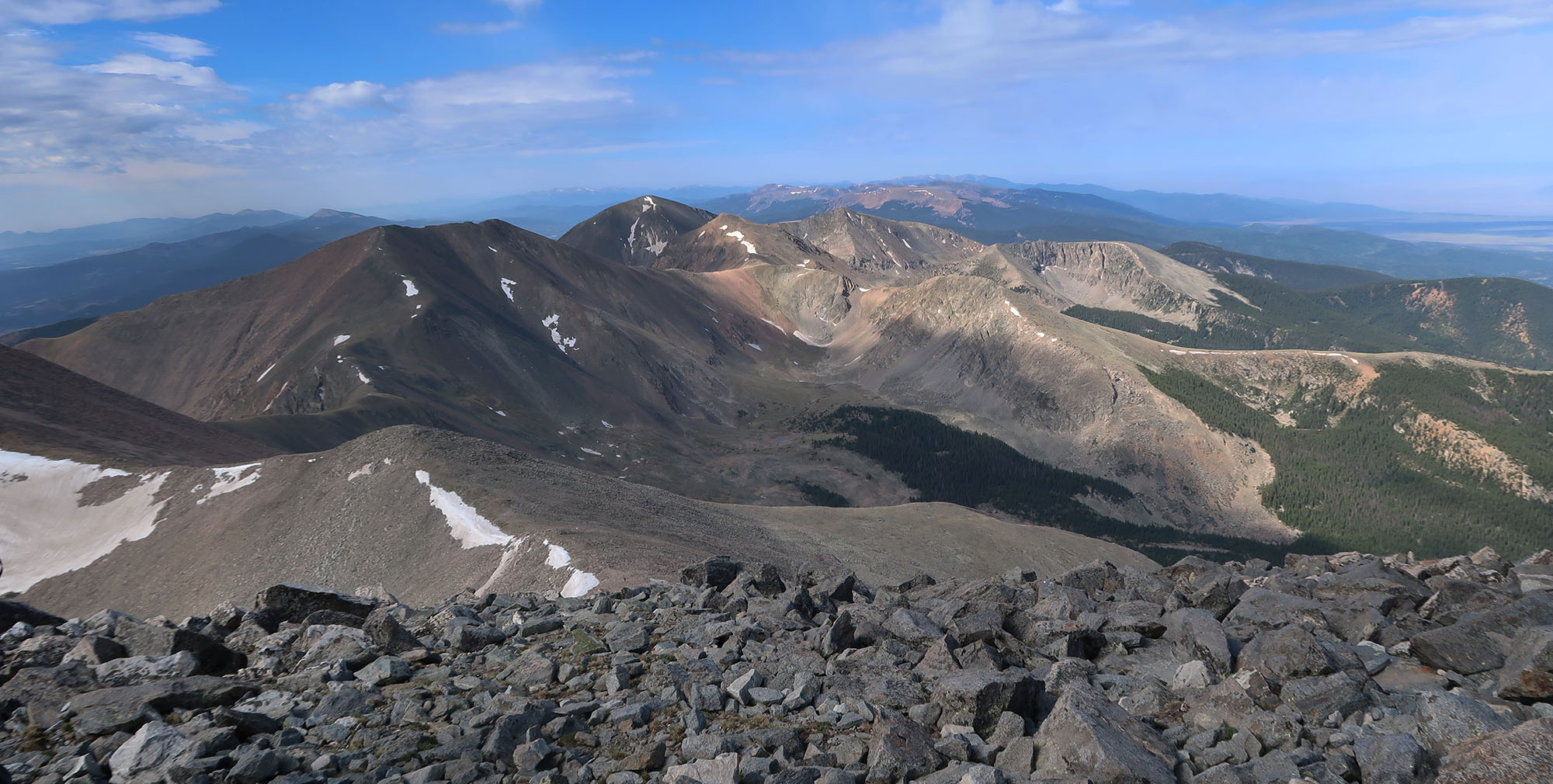 Summer 2022 would mark my second year of Colorado 14er peak bagging. But staring at a spreadsheet of these hikes mid-winter, I discovered something concerning. Of the 17 peaks I had climbed in 2021, the vast majority sat within a couple hours drive of Denver. Thus I reached one obvious conclusion: it was time to venture further afield.

And so I found myself zipping along through the parched, high-altitude landscape of the San Luis Valley. Destination: Culebra Peak.

Culebra ranks as the southernmost 14er in Colorado and, by extension, the Rocky Mountains. It sits in the Sangre de Cristo (“Blood of Christ”) mountains, which extend into northern New Mexico.

The peak rises above the tiny town of San Luis (the oldest town in Colorado). The town features a hilltop shrine to Cristo himself, complete with numerous bronze statues depicting the crucifixion.

Despite its somewhat remote location, Culebra ranks among the easiest 14ers to climb. The trailhead sits at 11,400′, meaning you rise roughly 2,600′ to the summit. The rolling meadows and meandering ridge line remain firmly in the “easy class II” grade. And its southerly locale means it dries out early in the season.

There’s just one major catch: you need an expensive, advanced reservation. Perhaps a dozen 14ers sit on private land (e.g. the entire DeCaLiBron). But only Culebra charges admission. As of 2022, the fee sat at $150 per person.

And the reservation process proved both tricky and confusing. You need to reserve on the private ranch’s website. They provide around 16 slots per weekend day (Friday-Sunday), excluding hunting season. And most snow-free dates book up months in advance. Booking itself involved multiple back-and-forth emails and providing my credit card details via a PDF form (not very secure at all).

Then there are the rules: arrive by 6 am, sharp. The gate will lock at 6:15. Attend a briefing. Be gone by 6 pm. Sign out, or face an additional fee.

All that said, you do get a premium experience. The owners allow hikers to camp out by the gate the night before, in a surprisingly pleasant field amidst sagebrush and sweeping views. You share the trail with fewer than 20 other hikers. That’s for the full day. And the dirt road to the trailhead, while incredibly steep, remains in excellent shape.

I pitched my tent the night before, amongst the other chosen few hikers. I overheard multiple conversations about 14er bagging. Most folks present were nearly complete with their list. They referred to peaks with casual, insider-slang: “Shav and Tab were just a total slog” … “honestly the hourglass didn’t phase me too much”.

The next morning, Carlos arrived via pickup to open the gate and escort us to Ranch HQ. He gave a short schpiel about the rules and procedures. Then we proceeded up the dirt road to the trailhead. I luckily managed to be the first vehicle up. This allowed me to keep momentum in my Subaru, powering up very steep dirt pitches. I think if I had needed to stop in a couple of spots, I would have been unable to proceed. But the road proved quite smooth.

I found the ranch stunning. Cielo Vista means “Skyview” in Spanish. A very fitting name. A herd of deer bounded through an alpine meadow alongside the road. Early morning light leaked through stands of aspen trees. It was a really special place.

There is no trail

I parked and started my ascent. Several hikers passed me quite early on. This was a selective and fit group of 14er compatriots. There was no defined trail to the ridgeline. Not even a worn path to follow. In fact, Carlos encouraged us to spread out and walk on healthy, undisturbed grass. By my estimate, somewhere around 1200 people hike Culebra each year. Overuse is simply not an issue.

The first mile or so proved steep but uneventful. We all made our way to the sharp, high ridgeline above the parking area. The trees disappeared early on, but the grass and flowers remained. I saw myriad marmots, unafraid of people.

I reached the ridgetop near the route’s sole, massive cairn. Just 700 vertical feet remained to the summit. Culebra means “serpent” in Spanish, and from here I could see the serpentine ridgeline as it meandered to the summit.

At this point, I fell into step with another hiker, whose buddy was running a bit slower. We chatted about the peak and hiking. He mentioned nearby Red Mountain, a “centennial peak” we could access from Culebra. And thus I was convinced to make this relatively quick and easy hike a bit more long and interesting.

The ridgeline went on for over a mile. After a few false summits, we arrived at the peak. I surveyed sweeping views of the central Sangre de Cristo and sized up Red Mountain. It was hard to tell where the ranch land ended, but we knew it was massive.

I descended alongside my new hiking buddy towards Red Mountain. More than half of the day’s hikers would continue on to this 13er. I felt a bit more camaraderie than usual on this hike since there were so few of us with such similar goals.

The col sat roughly 500 vertical feet beneath the peak. This descent proved steeper than the main route, but the talus and rock bands remained quite solid. I paused in the col to savor the views and early spring flowers.

Then we ascended chossy switchbacks to Red Mountain. Ironically, this more remote section featured a rather defined trail.

I mentioned before that Red Mountain is a Colorado “Centennial Peak”. This means it ranks among the 100 tallest peaks in the state with 300+ feet of prominence. Just over half of this list consists of the 14ers. The remaining peaks all stand above 13,800′.

I currently have no desire to hike all the centennial peaks. Bagging the 14ers would be challenging enough. And some of the slightly shorter peaks get super technical. But with just 800′ of extra vertical, and $150 already paid, I decided to throw it in for good measure.

Then we headed back towards Culebra and the trailhead. By now, the moody cloud cover had mostly vanished and the day grew warm and sunny. I ambled down the grassy slope from the cairn and made it back to the car. My red carpet experience with the southernmost 14er had come to a close.