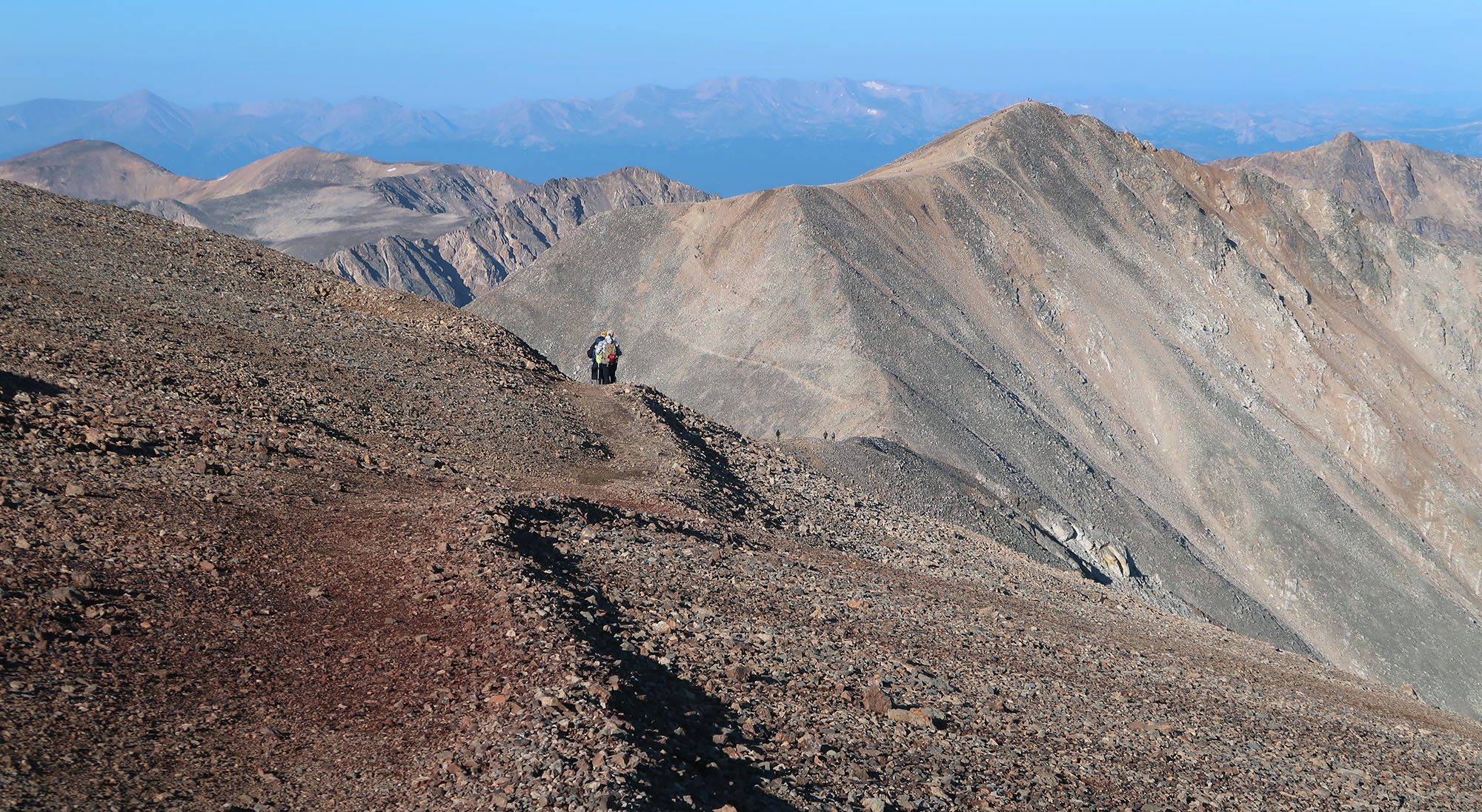 Come on down to South Park

I arrived the night before in the small town of Alma, Colorado. Alma claims to be the highest incorporated town in the United States. Indisputably, at roughly 10,500′ Alma has the highest altitude post office in the US. I slept that night at the Treeline Hostel, which bills itself as “the highest elevation accommodation in North America” … see a pattern here?

Alma sits in the northwest corner of Park Country, Colorado, near the town of Fairplay. The general area is often referred to as “South Park” and Alma is likewise home to the South Park Saloon. There is no real town known as South Park, but this corner of the state is indisputably where the fictional town ‘exists’.

I woke up around 3 am the next morning, and began the short drive up dirt roads to the Kite Lake trailhead. Alma charges for parking at Kite Lake. But don’t worry if you forget: someone very helpful comes through during the day to slip a form under your windshield wiper.

As a rule, Colorado Fourteeners do not come cheap! Unless you own a Jeep Wrangler or a donkey, most of the peaks involve 4000’+ ascents, with scant enchainments.

The DeCaLiBron provides a delightful exception to this rule. The seven-mile “loop” tags three or four peaks with just 3,130 feet of gross vertical gain. En route, you summit Democrat, Cameron, Lincoln, and Bross (hence De-Ca-Li-Bron). That comes to less than 1000 vertical feet per peak!

The route accomplishes this with two tricks. First, the 2WD trailhead sits above 12,000′ in elevation. And second, the range features super mellow cols characteristic of the Mosquito Range.

You can hike the loop either clockwise (Bross first) or counter-clockwise (Democrat first). The name suggests most hikers start with Democrat, and this indeed eliminates the deepest col early in the hike.

But another compelling bit of beta suggests ascending Bross. The trail up Bross features steep pitches and ample loose rock. It’s no fun to ascend, but even more annoying to descend. This compelled me to start with Bross.

I reached near the true summit right around sunrise. Much of the DeCaLiBron traverses private property. Numerous mining claims checker the peaks, and access to the public has ebbed and flowed in recent years. As the story goes, landowners remain concerned about liability issues, since mining equipment and open holes litter the landscape.

A smattering of miners “own” the summit of Bross. And these folks have failed to reach a consensus on opening the peak to the public. As a result, it remains technically off-limits to hikers. That said, a steady stream of folks marched right on up to the true summit that day. No fencing or physical barriers prevented hikers from doing so.

Bross takes its name from a prominent member of the early Republican Party who owned land near these peaks. Said Republican lobbied to name the nearby Mount Lincoln after Republican and Civil War president Abraham Lincoln. Mount Lincoln stands at 14,295’—the highest point in the Mosquito Range. Beyond the DeCaLiBron, to the south, lies Mount Sherman. Sherman comprises the fifth and final 14er in the Mosquito Range and also takes its name from a Civil War hero.

The journey from Bross to Lincoln feels less like hiking up a mountain and more like going for a stroll near 14,000′. The trail dips a few hundred vertical feet before rising gently to the highest point. The entire DeCaLiBron experience takes place well above the treeline. And vegetation of any kind remains largely absent from the ridgeline itself.

That said, you can see lush valleys from the steep slopes of Mount Lincoln. More than the other three peaks, Lincoln features dramatic topography and a pleasantly cuspy summit.

The sun had reached higher into the sky by the time I summited Lincoln. And by then many fellow hikers filled the cramped summit. I took a brief break before heading back down this spur and back onto the “main loop”.

Mount Cameron forms the third summit of the loop. From Bross to Lincoln, your journey takes you just beneath this mellow, rounded summit. After Lincoln (or Democrat, depending on order), you crest its ‘true’ summit. While Cameron looks quite impressive from Kite Lake, it actually fails to clear 300 vertical feet of prominence from nearby Lincoln. For this reason, Cameron ranks as one of four “fake” fourteeners on the list of 58 Colorado summits.

From the summit of Bross to the Summit of Cameron, the hike involves minimal ups and downs. Sadly, all that changes as the trail plunges towards the deepest col, by far, between Cameron and Democrat.

As legend tells it, local miners were none too pleased with Lincoln and Bross getting named after prominent Republicans. Thus the third prominent 14er in the area received the name “Democrat”. Please bear in mind, this is not the liberal, pro-inclusion Democratic Party of the 21st century. Rather this was the pro-slavery, pro-segregation opposition party of the Civil War and Reconstruction era.

I reached the col and cached a water bottle before ascending the final spur to Democrat’s summit. A giant group of airforce cadets had also decided to run the DeCaLiBron this weekend. I passed many groups of these young officers-in-training while ascending Democrat.

Finally, I reached my fourth and final summit. Needless to say, the day left me feeling quite accomplished! I soaked in gorgeous views of Kite Lake, Park County to the East, and the Sawatch Range to the West. It was a day well spent.