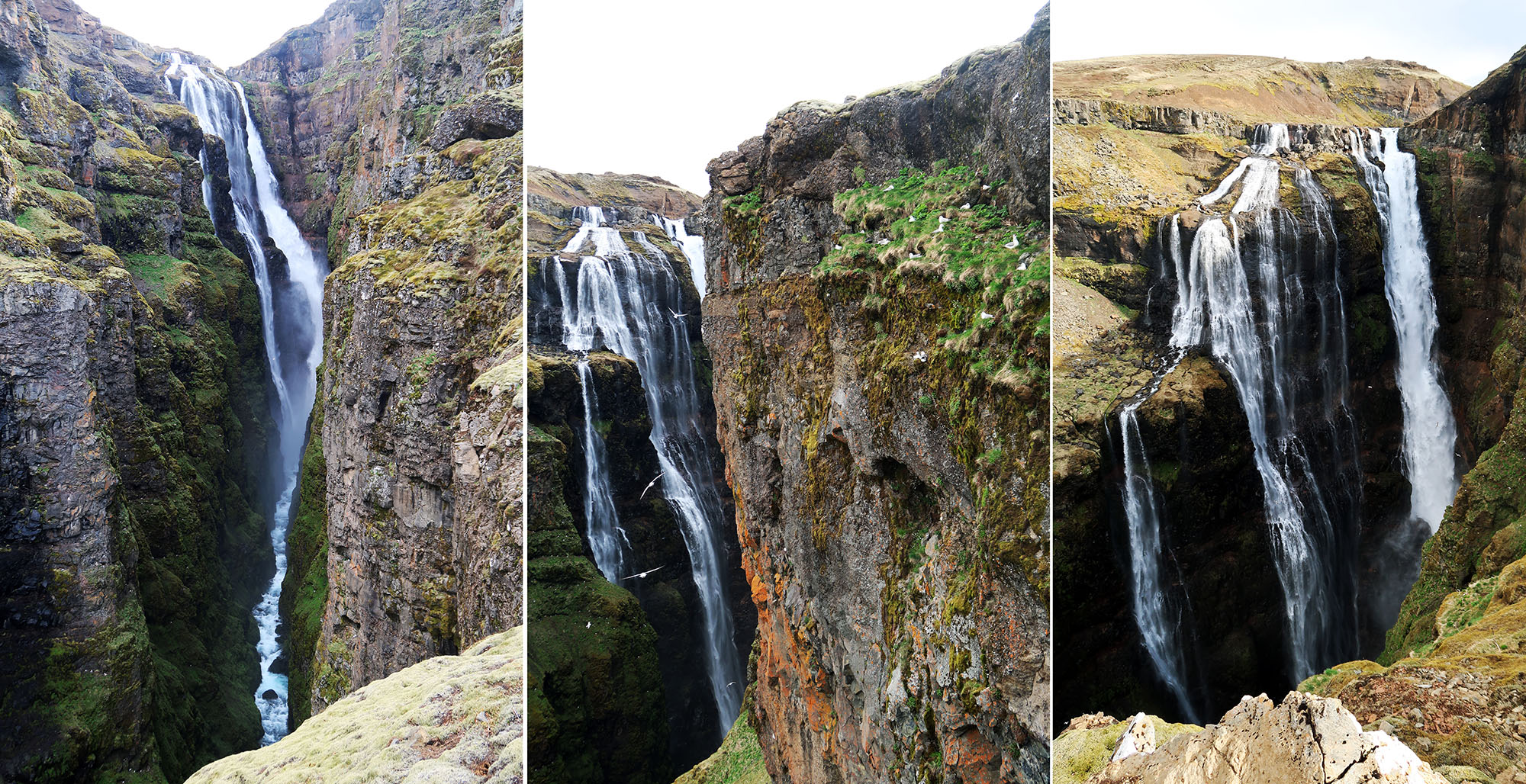 Glymur waterfall marked the final hike of my Spring 2022 trip to Iceland. I had spent a week encircling the island nation along the Ring Road, seeing literally dozens of waterfalls. That said, Glymur would prove particularly spectacular.

The trailhead sat at the inland tip of Hvalfjörður (Whale Fjord). And the trail began by gently rising above this landscape. I turned to admire the morning sun illuminating sullen clouds hanging low over the fjord.

Glymur and the legend of the evil whale

Glymur connects Hvalfjörður (Whale Fjord) to Hvalvatn (Whale Lake). Both water features take their name from a legend of an Evil Whale. In the legend, a man fathers a child with an elf woman. When he refuses to admit he’s the father, she transforms him into an angry whale that attacks nearby ships. After killing a blind priest’s sons, the priest casts an enchantment, leading the whale into the fjord, up the waterfall, and into the lake. Oddly enough, large whale bones have been discovered in the lake.

I found the hike itself quite legendary! After some early elevation gain along rolling hills, you reach the river, Botsná. Before descending to its banks, the trail passes inside a cave! This definitely felt slightly mythical.

Just moments later you reach one of the two “crux” of the route: a log crossing. The Botsná flowed robustly with spring snowmelt. And I found myself balancing on slightly-submerged rocks to reach the log. That said, the flow never breached the ankle cuffs of my waterproof hiking boots. This log only gets placed out and secured in mid-May. The exact timing is weather-dependent.

Iceland’s second tallest waterfall does not come cheap! The four-mile round trip route rises roughly 1300 vertical feet along a rugged river canyon. This makes for a lovely partial-day hike, fine for fit families. But recognize this is not a stop-stroll-gawk situation.

Towards the top of this climb, the dramatic falls slip in and out of view. White birds encircle the mist, darting among roosts in the mossy canyon walls. Pictures never do these hikes justice. But they are especially poor representations of this enormous, narrow waterfall. Bear in mind, the cascade in these photos drops roughly 65 stories!

Eventually, I reached the rolling, open flood plain above the falls. The trail continued towards nearby mountain peaks. From here you can turn around or try to cross the river to loop back towards the trailhead.

I looked for a shallow crossing. In mid-May this proved tricky. Inevitably, water poured into both of my waterproof boots. I think gaiters may have mitigated this. But regardless I now took cold, squishy steps. You can approach this hike with two strategies: wear waterproof footwear and try to be careful. Or, perhaps better, wear breathable footwear and accept some soaked feet.

The trail along the far bank descended gradually along a broad, open dirt path. The sun rose higher above the fjord as I came closer to the trailhead. My hiking adventures in Iceland were nearing a close. I was ready for some delicious lunch in Rejkavic.