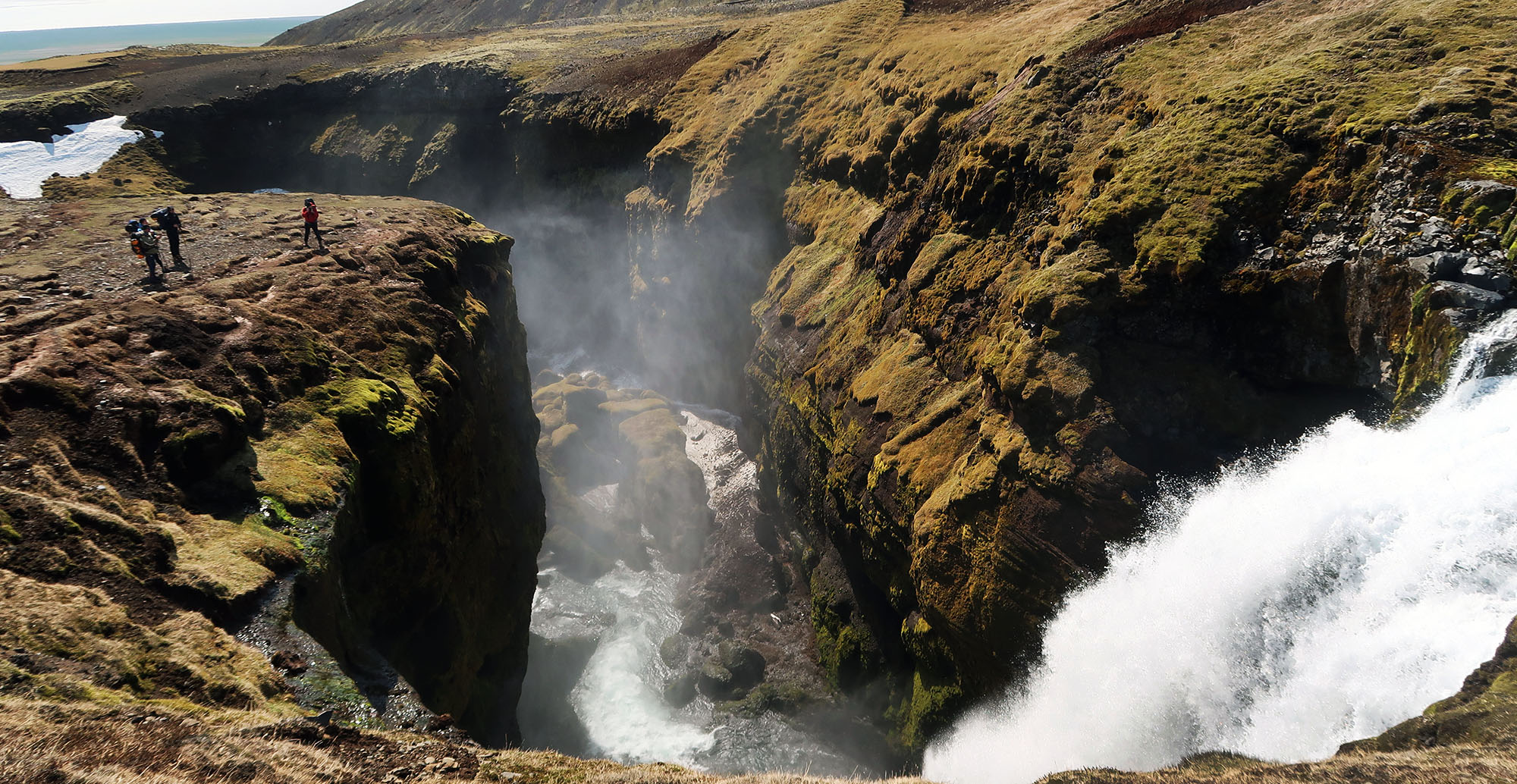 Skógafoss lies in the south of Iceland roughly 2 hours from Reykjavik. The famed waterfall sits just off the “ring road” near the eponymous town of Skógar. The massive falls appear from the Ring Road, and tower above the large, dirt parking area.

To lookers right I saw visitors making their way up the 400-something stairs to a viewing area above the 200-foot tall waterfall. Before ascending these zig-zagging stairs, I wandered over to the base of the falls, to soak in its scale.

Iceland ranks among the smallest countries of Europe by population. But this sub-arctic island nation makes up for this in the sheer quantity of stunning waterfalls. Among them, Skógafoss certainly counts among the very best.

Near the falls, heavy mist soaked my hair and clothing. Above my head, northern fulmar darted past the falls, alighting in cliffside nests.

The Climb above Skógafoss

The best views of the massive waterfall come from just beyond the parking area. Literally anyone can enjoy the sublime sights, sounds, and spray of this Icelandic crowd pleaser. But I strongly recommend at least ascending the stairs to the top viewing platform above the falls.

Skógafoss rises roughly 20 stories, and the best way to understand this involves the stairs. They zig-zag up the steep grassy slopes just East of the waterfall. In mid-May, dandelions and other wildflowers festooned the hillside.

Roughly 20 minutes of huffing and puffing later, I reached the top.

I had just three days of ample sunshine during my week+ in Iceland. And luckily, this was one of them. The morning light produced a gorgeous double-rainbow in the mist beyond the falls. These rainbows, I am told, appear every sunny day.

Of the 100+ hikes I’ve documented across four continents, Skógafoss might just be my top recommendation. The Skógá River continues, for miles, into the rolling highlands above the eponymous falls. And a well-maintained hiking trail follows the river, along its southern bank.

Along the way, you pass over a dozen major falls. The least impressive of these falls would be the “big payoff” on most hikes in the American West. They’d be major attractions with paid parking in the Northeastern US. They’d be the pride of some small town in the Alps or the Cascades. But along this hike, they are a dime a dozen.

And you can decide to experience as much or as little of this as your time and fitness allow. You can wander over to the base of the falls and call it a day. You can ascend the stairs, break a sweat, snap a selfie and then grab the bus. Or you can hike, as much or as little as you want. And there will be roaring waterfalls the whole way.

Skógá means “forest” in Icelandic. But that name, sadly, seems long outdated. Today the river and its rugged canyon snake through rolling, treeless highlands above the coast. The hiking trail ascends very gradually, via a wide, dirt path.

An entire geography textbook in one hike

I slowly gained altitude, passing the lower half dozen falls. As I rose higher, the sea beyond the ring road came into view below. And above me, so too did towering glacier-capped mountains. In North America or Europe, snow-capped peaks typically sit hundreds of miles from the ocean. In Iceland, a 10-mile hike can take you from one to the other.

If you do decide to hike along the Skógá you can choose to make the trip as simple or strenuous as you like. The first mile or two pack a punch, with ample waterfalls and a gradual vertical rise. The route provides an impressive start to a popular backpacking route, to 3000′ above sea level and a mountain pass between two glaciers. I saw a half dozen folks opting for this latter, overnight adventure.

I decided to strike a middle ground, ascending roughly 2300 vertical feet over roughly 5 miles (one way) to a bridge over the river.

The entire trek from Skógafoss, over the mountain pass, to another nearby town avoids any travel over a true glacier. This makes the route safe for folks without any technical skills or equipment. But make no mistake: intense winds and mercurial coastal weather await you at higher elevations.

And in mid-May plenty of spring snowpack awaited me even at middling altitude. My hike would only take me 2000′ above sea level. But Iceland sits just below the arctic circle. Hence snow.

As the snow cover grew more consistent, I began to question my original goal of reaching the bridge. Then I ran into a pleasant Aussie family who claimed the final waterfall was “the best one yet!”. Challenge accepted.

Eventually, I reached this final cascade. And it was super tall and charismatic. It dropped into a cirque ringed with cliffs and snow-covered cornices.

The Aussie family had turned around at the final falls, daunted by the steep, snowy slope. I decided to trudge up the snowpack, knowing a great glissade when I see one. For the first time, I saw the coastline to the East. And I was met with strong, intense winds.

The crowds were long gone a mile or two before this point. But I ran into a French couple braving the gale. They told me beyond the bridge, the winds were somehow even more intense!

I reached my goal: a small steel span across the now-diminished river. By now I was wearing a down puffy, rain jacket, wool hat, and ski gloves. The wind felt like at least 30 mph in strength.

I headed back down, sliding on the snow off the ridgeline and back into pleasant spring weather. Then I had the equally beautiful task of descending roughly 5 miles back the way I came. It was a beautiful hike back along dozens of waterfalls.