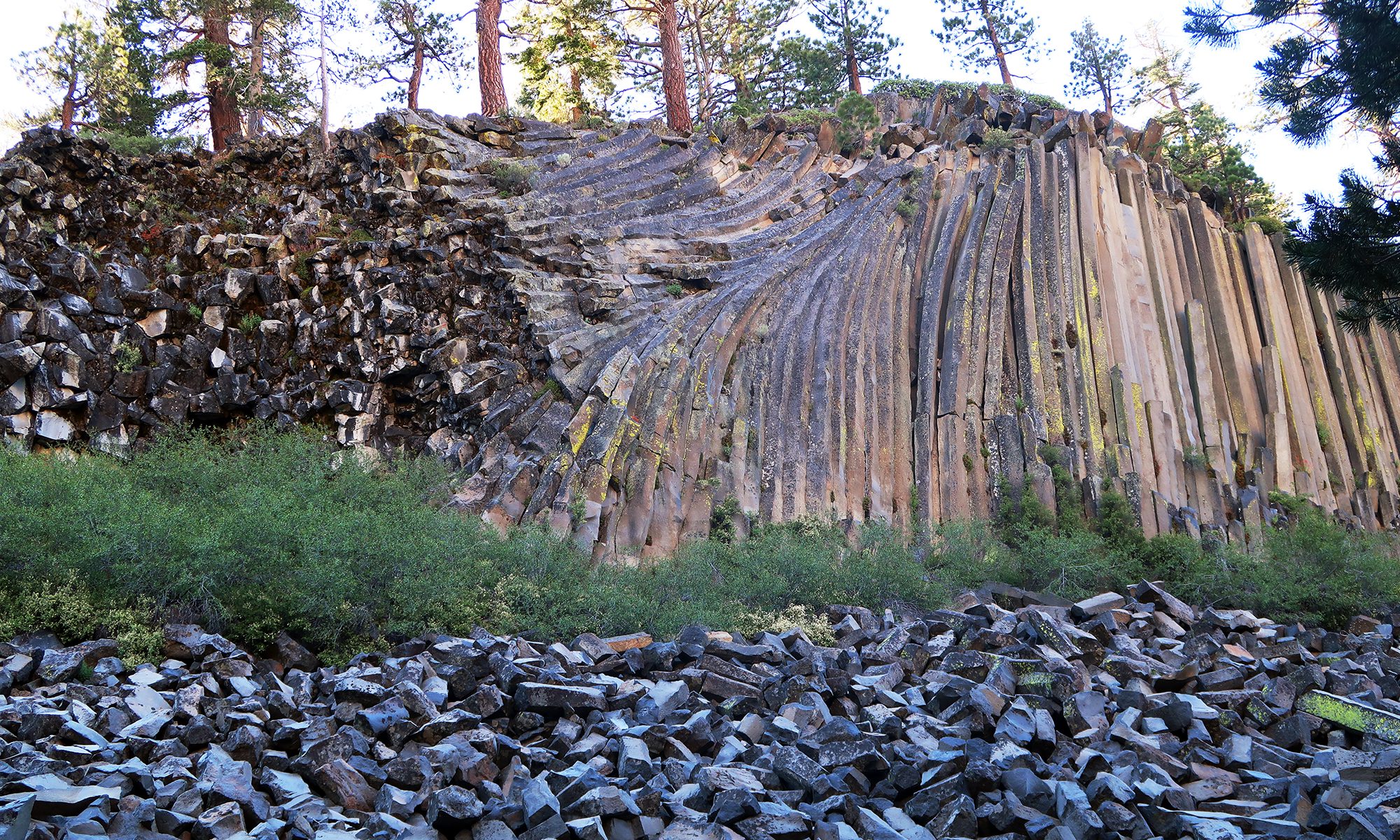 I drove the winding roadway towards the Devil’s Postpile National Monument around the crack of dawn. I had spent Saturday mountain biking at Mammoth ski area, staying overnight right near the main base. As luck would have it, the roadway to Devil’s Postpile runs right past the base lodge, underneath the gondola. The road promptly narrows from a standard 2-way state highway to a winding, unstriped mountain adventure. And the views from this drive are nothing short of stunning. Jagged stone peaks rose up from the rolling hills of conifers, snowfields, and rushing waters—the Eastern Sierras in mid-summer!

Despite arriving shortly after sunrise, I found a nearly-filled parking lot. I snagged one of the last remaining choice spots and hit the trail.

Devil’s Postpile is an extremely accessible, extremely family-friendly hike. A flat pathway along a bed of pine needles takes you under modest tree cover a bit over a quarter mile to the “main event”.

As explained in this deliciously dramatic post from the NPS, Devil’s Postpile formed from a massive lava lake roughly 100,000 years ago. A massive flow of hot, iron-rich basaltic lave formed a lake roughly 400 feet deep in the area. As the now-still lava slowly cooled and condensed, a pattern of hexagonal, columnar cracks formed. The lava hardened into solid basalt, and the postpile was formed. Over the next 100,000 years, a series of glaciers excavated the monument from beneath less sturdy detritus. These same glaciers polished the top of the monument smooth. Finally, constantly freeze/thaw cycles enhanced the striking hexagonal cracks in the rock.

I found this formation pretty damn cool. File this one under “rocks do the darnedest things!” Between the postpile and the train, a large pile of broken-off columns lay in a heap. They too were delightfully hexagonal. I saw a few early-riser children having a blast climbing all over them.

An out-and-back stroll to the post pile comes in under a mile in total distance. But you can make this outing a full six miles with a sensible 300 vertical feet in elevation change by heading down to Rainbow Falls. And so I did.

The trail passes into open sunshine near a large burn area from years ago. It then heads into the Ansel Adams wilderness area.

At just over 100 feet, Rainbow Falls is the largest waterfall in the Eastern Sierras. I found the volume of the falls relatively impressive by California standards—at least as of mid-Summer. The falls feature a solid viewing platform at falls height. Even better, you can walk down some stone stairwells towards the base of the Falls.

Back over the top of Devil’s Postpile

I took a slightly different route back towards the postpile that briefly put me on the famed Pacific Crest Trail. When I reached the monument itself, I took another alternate trail that led me over the top of the 60-foot high basalt formation. The climb up featured an intimate view of some of the hexagonal columns.

Atop the formation, the columns had been polished smooth by some previous glacial activity. From there, the formation bore a striking resemblance to a stone patio!

I don’t consider it too crazy that cooling lava could form such a suspiciously perfect-seeming pattern. After all, crystalline structures (from graphite to snowflakes to diamonds) tend to form more often than not when molten material is left to very slowly cool in an undisturbed setting. That said, on geologic timescales, undisturbed settings are apparently a rare commodity.

A short while later I arrived back at the parking lot. The place was now swarming with people and cars hunting for non-existent free spots. I climbed into the car, cranked the A/C, and began the winding journey back out towards Mammoth Mountain. Along the way, I caught a stunning view of the Minarets and the Ritter Range. Rocks really do the darnedest things.