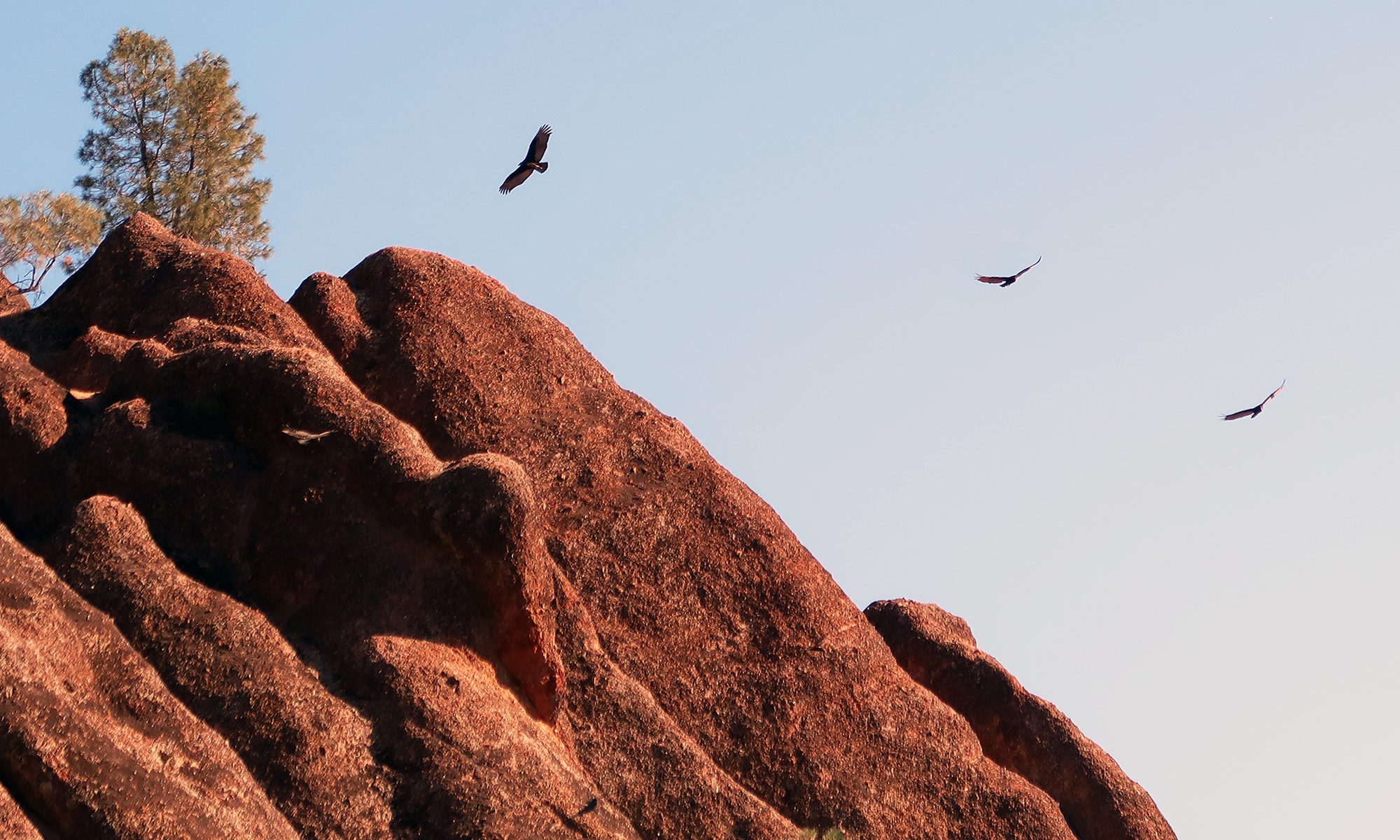 The day began long before sunrise, with a 2-hour drive to Pinnacles National Park. This outing would mark my second national park visit in California in only a few weeks. I aimed to arrive at Pinnacles around sunrise, so I could enjoy a multi-hour hike before the temperatures in central California inevitably climbed into the high 90s.

After stopping at a Starbucks around 5:30 am, google updated my route to the park in favor of some smaller side roads through the hills. I thought this sounded like a great idea. But 20 minutes later, I suddenly found myself on a one-lane dirt road winding up through a very steep canyon, with no shoulder and no guard rail. Then I reached a locked gate. Google fail.

Very, very carefully, I turned the car around and began back down the road. That’s when I caught a glimpse of a stunning inversion over the valley below …

Soon enough, I recovered pavement, and a short while later arrived at Pinnacles. Pinnacles is California’s newest, smallest and least-frequented national park. In 2019 it saw fewer than 180,000 “recreational visits” or roughly 24 times less than Yosemite.

I drove into the park along its narrow, unstriped “main” roadway (from the western entrance), and parked in the main lot. My target that day was the “High Peaks Trail” that ran along the main spine of volcanic rock “pinnacles” that lend the park its name. Shortly thereafter I set off through dusty scrub brush towards the ridgeline.

The trail began innocently enough with a gentle incline. Then came a series of switchbacks towards the high ridge. I recommend starting early in the day, particularly on this western side of the park (which is cleaved in two by the rocky ridge). This combo of timing and exposure guarantees a shady ascent!

As I gained the ridgeline, I once again caught a glimpse of sunlit clouds in the valley containing Soledad and the Salinas River. Even further west, I could see the coastal mountains near Big Sur.

A swarm of California Condors

I began along the high ridgeline, and the trail gradually shifted into the eastern half of the park. The morning sun beat down in full force, but luckily the climbing was behind me. Then I caught a glimpse of a few of Pinnacles’ California Condors. The species is endangered and quite rare. But upon this ridge they practically formed a swarm!

The condors’ silhouettes formed an unmistakable profile: enormous wingspan, narrow necks, bulgy heads, and crooked beaks. They seemed somehow both majestic and comical. Scavengers through and through.

The trail wound its way around the high ridgeline, in and out of the sun. The narrow, rocky path flirted with various precipices. Occasionally, it featured metal piping to provide both safe travel and peace of mind. This trail would definitely be a lot of fun with adventurous kids.

Looping back through the Balconies

The high ridge route proved brief: perhaps a mile, not including the approach. From there I turned east and north. My plan was to make a loop through the narrow passage known as the “Balconies”. The trail meandered down a dirt hillside with small trees and sagebrush. the sage smelled quite nice!

The trail descended down for two miles towards the Eastern trailheads and parking. Then I headed along a more northerly route back to the west and towards the Balconies cave area. This part of the journey was mostly uneventful. The sun climbed higher into the sky and things started to heat up. I spotted a deer.

Finally I came to the Balconies area, where an impressively narrow valley cut across the rocky ridgeline. The caves were closed, due to COVID. But plenty of climbers were out enjoying some of the rock faces. This looked like a pretty sweet spot for rock climbing. Many trails along the high route led to fixed anchors. Every so often a small carabiner icon was affixed to a wooden post, marking these opportunities.

A short while later I arrived back at the car park. It was a nice early morning in Pinnacles. The temperature was quickly approaching triple digits and I was thankful for some quality A/C time on the ride home.