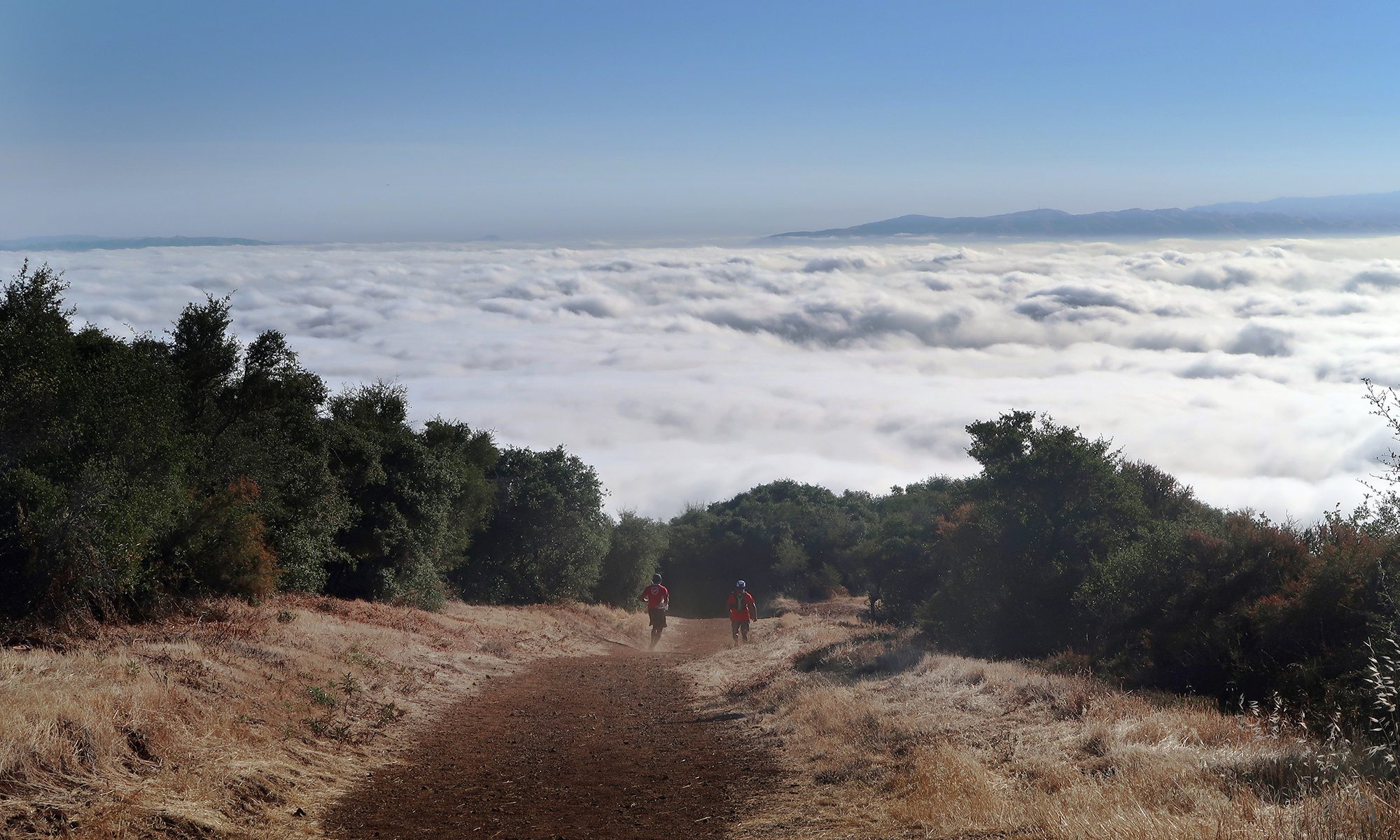 Having lived in the Bay Area for just a few months now, I’ve already hiked Black Mountain quite a few times. The first of these hikes took place, in fact, during a job interview that brought me out to California for only a couple of days.

Trails to Black Mountain’s summit cover well over 2000 vertical feet in under 10 miles of round trip distance. This makes the hike an ideal training ground for adventures farther afield. For instance, as I prepped for Mt Whitney, I did this hike several times carrying increasing amounts of weight on my back.

Of the many hikes I’ve done to this summit, this one in mid-July stood out for a stunning inversion, experienced from all angles during the hike.

Phase One: Beneath the Clouds

I began the hike at the Rhus Ridge trailhead. This trailhead sucks. There’s perhaps 10 parking spaces, and they are never available. I’ve arrived around 5 am under darkness, and still no dice. Worse yet, the vast majority of surrounding roads feature tons of “no parking” signage. The trailhead instructs folks to park nearby at Foothills College. This is very far downhill. It’s also completely closed off in 2020 due to COVID. Luckily, there are some (much closer) gaps in the no parking signage a bit downhill from the trailhead.

The steep dirt road to Rhus Ridge rises roughly 700 vertical feet from just a couple hundred feet above sea level. At this stage of the hike, I was simply beneath dark, dreary cloud cover. Down valley, to the south of San Jose, a golden sunrise peaked through beneath the clouds.

The foggy air of the cloud itself began somewhere well above 1000 vertical feet. Even atop Rhus Ridge, where the trails meander through meadows, the seeing distance was relatively far with thick clouds above.

Phase Two: Inside the clouds

I pressed onward, towards the many switchbacks through tree cover that persist up towards the ridgeline. At first, this meant entering a world of fog and whiteness.

But eventually, the fog began to grow thinner. I was approaching the top of the cloud layer. Soon I would be greeted by clear sunshine.

Inversions like this one happen like clockwork in the Bay Area in summer. The basic process goes like this: First, the California sunshine beats down relentlessly over the inland valleys (e.g. Silicon Valley, the Central Valley) creating very hot, dry, low-density air. This mass of air thus becomes very low pressure. Second, cold, moist air persists out at sea, powered by the Pacific Ocean which tends to see currents from the north and upwelling of deep waters along California’s coast. This maritime air is cold, dense, and moist and thus very high pressure. Third, in the evening the sun sets and no longer powers the continual heating and drying out of valley air. Fourth, left to equilibrate, the dense/cold/moist/high-pressure ocean air rolls into the valley through the Golden Gate and fills Silicon Valley with a low-lying layer of cold, dense air. But the hot, dry, low-pressure, clear air above persists.

Phase Three: Above the clouds!

A short while later I reached the PG&E high-tension lines near the top of the ridge. At this point, I was treated to stunning views across the Bay above a sea of clouds! This phenomenon is called an “inversion” because hot air (the clear, sunny skies near the summit) sits on top of cold air (the clouded-over cooler air of the valley). This temperature profile is, therefore “upside down” compared to the normal situation in the lower atmosphere where the temperature falls at higher altitudes. Inversions are not at all unique to the Bay Area, but the Bay Area in summer sees them with a somewhat unique regularity.

The views above the cloud line were northing short of stunning. I could see straight across Silicon Valley to the more inland mountains. Beneath the clouds were San Jose, San Francisco, and the 8 million residents who crowd around the bay. I wondered just how many of those folks were above the clouds right now, enjoying the sunshine—a small club of early risers who hike.

I continued higher still towards Black Mountain’s tree-less summit. A few other runners and hikers were up here on this cloud island with me.

As I neared the summit, the sea of white grew increasingly sheer. Faint traces of buildings and roadways below began to appear. Plenty of folks would get out of bed and be none the wiser that the day had begun under cloud cover.

There are a handful of hikes, runs, and strolls I’ve done seemingly hundreds of times. Getting outside, to run or hike or ride a bicycle, you become intimately familiar with how landscapes we often take for granted can transform. Through snowstorms and fog and rain and the seasons, these landscapes are constantly evolving. I love how dynamic these repetitive experiences can become. Andy Warhol asked, “Isn’t life a series of images that change as they repeat themselves?”