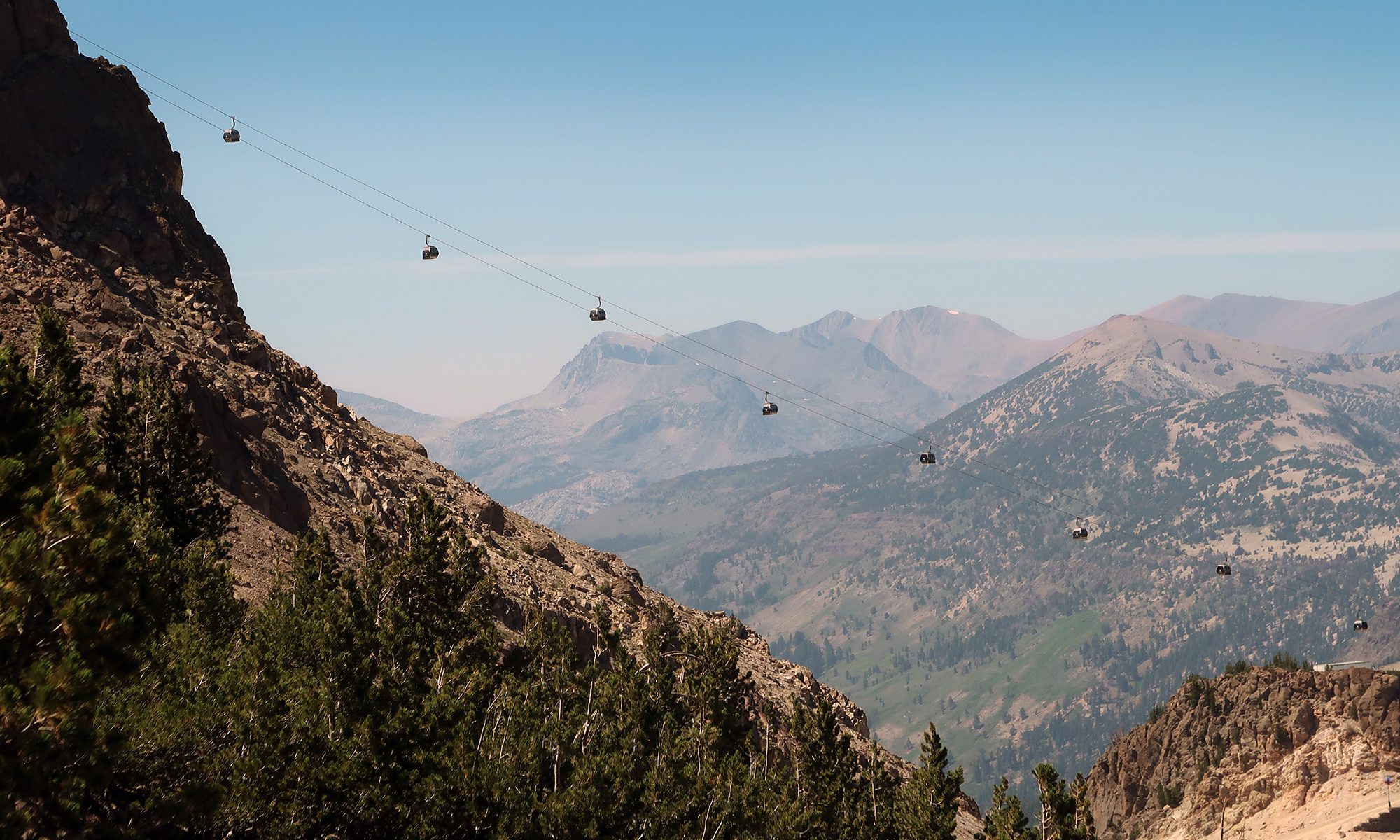 I snagged a pretty excellent parking spot in an otherwise fully packed lot at Twin Lakes Campground. I arrived mid-morning on a peak late-summer Sunday. The place was humming with campers and paddlers and hikers. The journey began with a walk across a bridge between the two “twin lakes” towards the various camping and RV spots under tree cover. The scene was gorgeous, with a broad stream of water cascading down grassy boulders into the lake below.

Next, I passed through the campgrounds. I walked by all sorts of elaborate tent and RV setups. Car camping in California’s Sierras is serious business! Towards the back of this makeshift village, I found the trailhead for the Dragon Back Trail to Mammoth Mountain’s summit. Thus began my ascent.

The Dragon’s Back trail rises roughly 2400 vertical feet over three miles to the summit of Mammoth Mountain. There are several ways to the summit, including a gondola run by the ski resort. The resort also has a hiking trail on property that ascends from the north. But that trail spends a lot of time crossing broad, dusty ski trails devoid of tree cover.

In contrast, my chosen approach would be far shadier and visually interesting. The Dragon’s Back is an unusually rocky and rugged ridgeline of volcanic rock that juts up steeply from Mammoth’s southernmost flanks. It forms the southern boundary of the ski resort, and features ample pine tree coverage and continually evolving views for the ascending hiker.

The Ascent along the Dragon’s Back Trail

The trail first ascends through steep, pine-covered slopes through a series of broad switchbacks. It soon reaches a plateau above Twin Lakes that is home to several other large (mammoth?) lakes. Then it begins the ascent of the “Dragon’s Back” with tons of smaller switchbacks, still mostly under tree cover.

Soon I reached the first of several excellent overlooks. I could see at least four lakes behind me. The rugged mountains of the Eastern Sierra loomed behind these lakes. I could still see patches of snow on their northern slopes, even though it was now August!

The rocky ascent lasted long enough to give me a good workout. In fact, the whole point of this Sunday afternoon hike was conditioning and acclimation. In just a few days I would be attempting an ascent of Mount Whitney, the tallest peak in the contiguous U.S. At a respectable 11,000 feet above sea level, Mammoth Mountain was a good place to shock the bloodstream, before spending a few days resting up in town at 8,000′.

Wide-open views on the Upper Mountain

A couple miles in, the rocky switchbacks and pines gave way to wide open boulder fields. Mammoth’s alpine summit loomed ahead. Signs of the ski resort were everywhere: chairlifts, obvious trail regradings, signage and bike trails. But above all that loomed one signature feature of this mountain: the mighty gondola. Its cabins floated through the sky across a long, dramatic span from mid-mountain to the rocky summit.

The trail continued towards the top of a southerly false summit. Then I continued along a work road towards the mountain’s true summit and the gondola terminal. The trail interacted with several of the Mammoth’s downhill mountain biking routes. Occasionally an advanced rider or two would come barreling down these trails.

I find hiking a ski mountain to be a bit underwhelming and monotonous. Climbing wide open, regraded ski trails feels more laborious than adventurous. And as an avid skier myself, there’s something a bit melancholy about the bare, vacated slopes. That said, these outings do come with some excellent creature comforts. At Mammoth’s summit I made use of the restrooms and water fountains and picnic tables.

Then I headed up to the summit sign, just above the lodge. It was colorful and retro-themed in the classic National Forest Service style—excellent for group photos. Mammoth provides the highest lift-serviced skiing in California (a full 1000′ above the highest resorts around Lake Tahoe).

The descent, and Seven Lakes Point

Rested and refreshed, I began right back down the way I came. It took perhaps 30 minutes to get back onto the “Dragon’s Back” and then below tree-line. About two-thirds of the way down, I took an alternate path that brought me towards “Seven Lakes Point“. En route to the lookout, I found some cool hazard signage stashed by ski patrol in the trees.

Then the trail came to a prominent rock outcropping known as “Seven Lakes Point”. As you might imagine, seven lakes were visible from this vantage point. It was a lovely scene, if rather similar to the views along the whole ascent.

This alternate route then traversed back towards the main trail. The route passes across some slightly vertigo-inducing rockfalls that are best traveled with haste!

In short order, I was back on the main route. I descended in the late afternoon sun towards the campground and my car. Overall it was a surprisingly idyllic journey along Mammoth’s southern slopes.