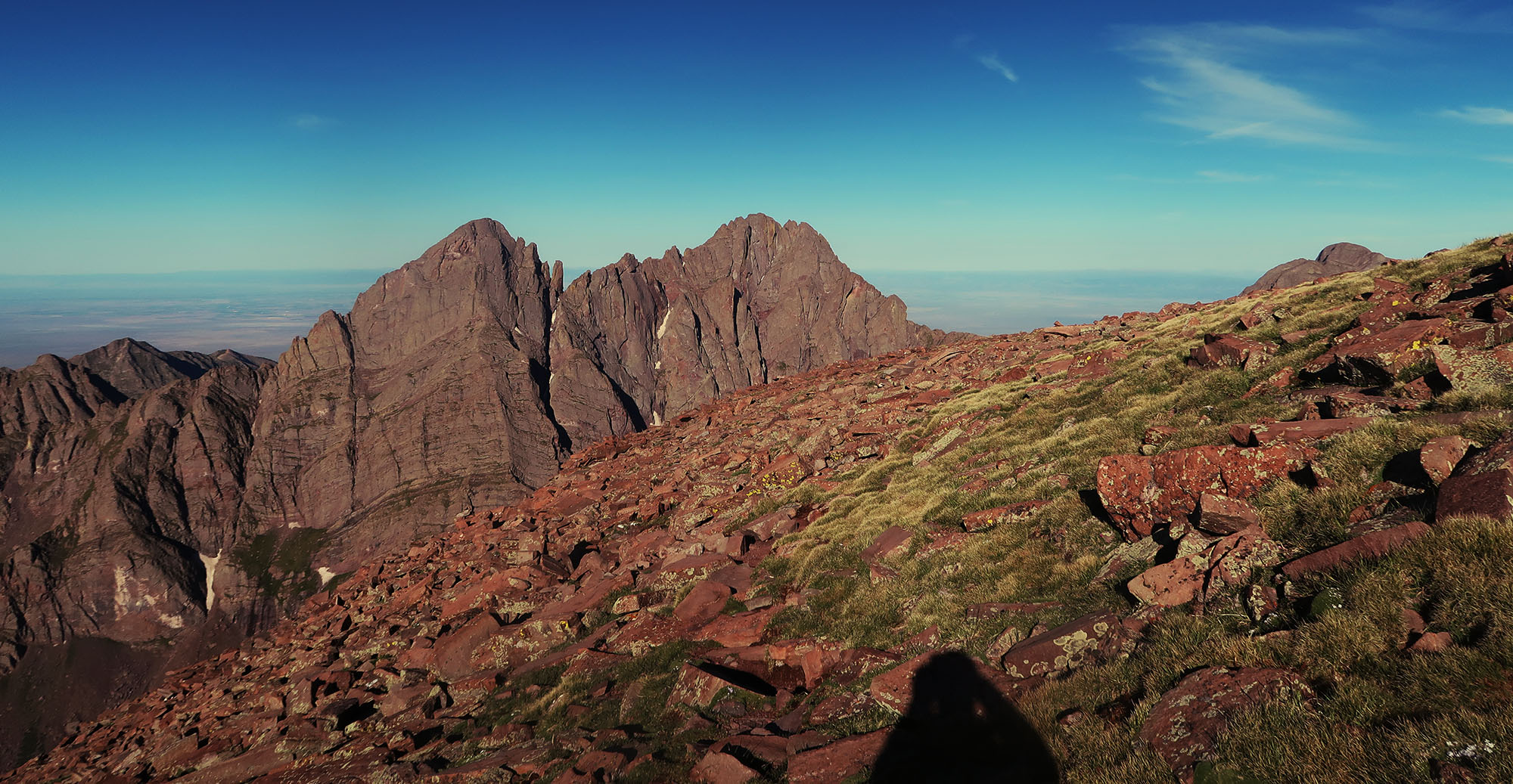 Into the Sangre de Cristo Wilderness

I arrived in the small town of Westcliffe on a sunny Saturday morning. I sped along some dirt country roads towards the ‘lower trailhead‘ for the Crestones. This trailhead sat below treeline, in the open fields at the foot of the Sangre de Cristo range.

Then came the rough drive to the upper trailhead, 1000′ higher in elevation. I definitely recommend a high clearance vehicle for this! Slowly but surely we ambled up towards 10,000′ and the start of the hike.

We began the multi-mile trek up a dirt road towards the upper basin. You gain roughly 2000 vertical feet, roughly half on the road and half on one of two single-track trails. This deposited us just below 12,000′ where we set up camp.

Humboldt Peak sits amongst a tight cluster of four prominent 14ers. Directly across the upper basin, the Crestones (Crestone Needle and Peak) loom large, with their rugged walls of solid rock. And just a mile or two north, Kit Carson and Challenger Point unfold in an equally rugged fashion. Together these peaks are often termed ‘The Crestones’.

The camping spot we chose sat amongst the two South Colony Lakes. This location, in the heart of the Sangre de Cristo Wilderness, provides easy access to Humboldt and the two Crestones. Climbers typically approach Challenger and Kit Carson from the opposite side of the range, in the San Luis Valley.

The biggest novelty on this trip: sleeping near 12,000. I had never spent a night so high. This made me slightly nervous about altitude issues. That said, while I didn’t sleep particularly well, the hike went perfectly fine.

Also nerve-wracking: the sheep! A herd of bighorn in the South Colony Lakes area has grown very accustomed to campers. We noticed them crowd around campsites in the afternoon, waiting for campers to pack up and leave. They would then traipse into the campsite and start rummaging for food and salt.

Friedrich Wilhelm Heinrich Alexander von Humboldt was both a man of many names and many talents. He traveled the globe in the early 1800s, contributing to our understanding of subjects as wide-ranging as botany and plate tectonics.

The german polymath and scientist traveled to America and met with President Jefferson, around the time of the Louisiana Purchase. Although he came nowhere near Colorado, his prolific interest in geography and the new world earned him, in time, a 14er. In general, being a white man of import in mid-1800s America was a great way to secure a Colorado 14er.

The next morning, around daybreak, we headed up towards Humboldt Peak. From our tentsite, the ascent required a roughly 2000-vertical foot gain along a low-class 2 trail. The route featured ample switchbacks on the steeper, lower slopes.

Humboldt itself ranks among the frumpier 14ers. But hiking its Western flanks provides spectacular views of the Crestones, surely among the most spectacular peaks in the state. And we were treated to some choice alpenglow on their rocky parapets.

This trip also allowed us to scout out the Crestones, and the “Ellingwood Arete” in particular. This steep face of Crestone Needle forms a classic alpine climb to the 14er summit. And on this beautiful morning, we could just barely make out a couple climbing parties on the route. It blew my mind how small (nearly impercetible!) humans appeared on the ledges. Crestone Needle rises 2000 vertical feet from the lake, roughly 2 Empire State Buildings.

After roughly 90 minutes, we gained the ridge. The ascent got slightly more tricky, over talus and uneven ground. Soon we reached the surprisingly cuspy summit. The final stretch took us close to a steep dropoff to the north.

We topped out, enjoying the views and a snack. The Sangre de Cristo rise tall and rugged, but form a delightfully narrow range through south-central Colorado. From Humboldt we could see flat valleys to both the West (Crestone) and East (Westcliffe).

Then we headed back down to camp. We packed our things and headed down towards the trailhead. Humboldt Peak was in the books.