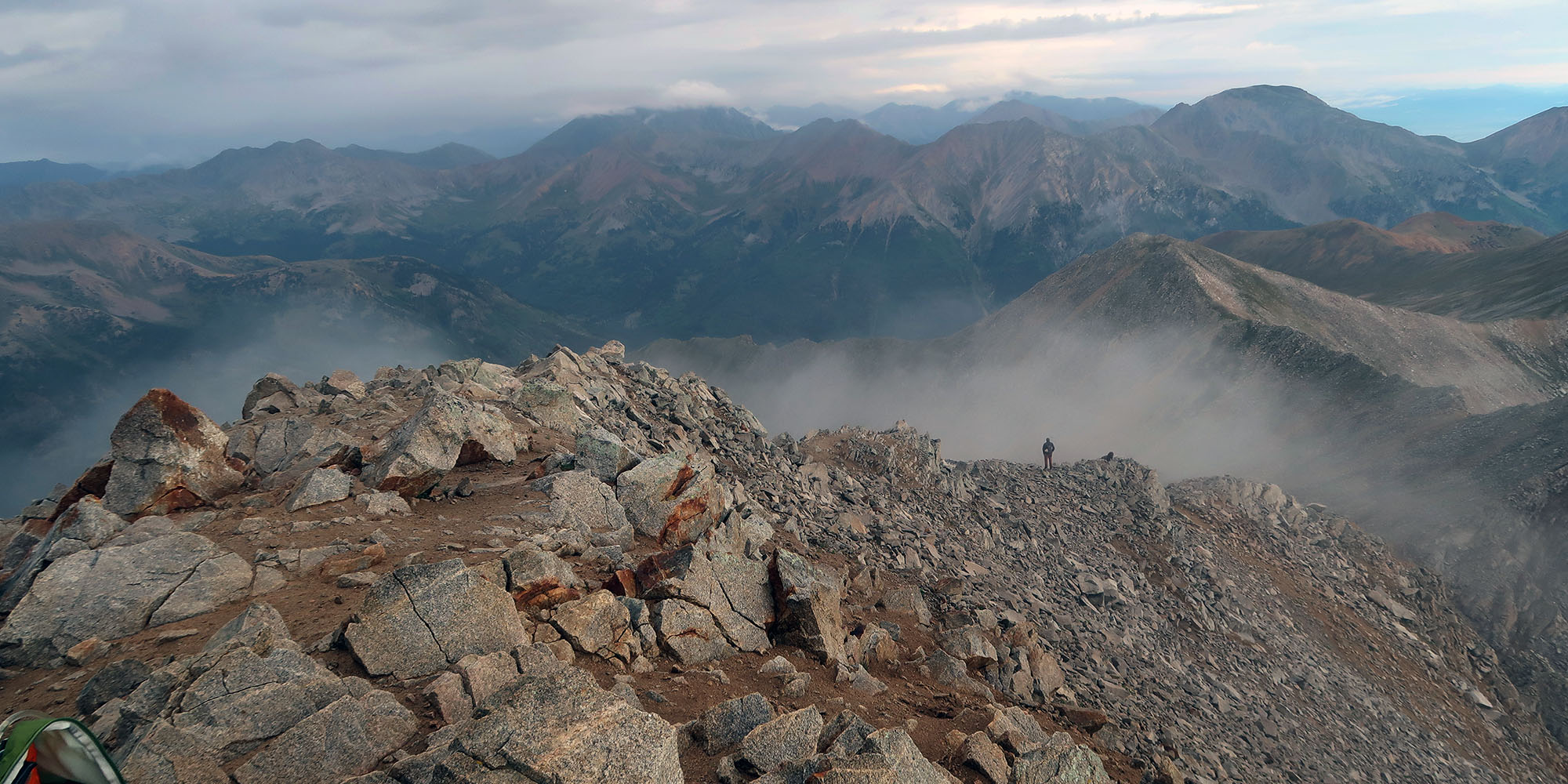 Standing in a gas station parking lot near Buena Vista, we had a decision to make. The original plan involved driving down to the Sangre de Cristo to bag Kit Carson Peak. But moody clouds and bouts of rain had given us doubts.

Mid-summer in Colorado means monsoon season. And 2022 certainly seemed wetter and stormier than the past couple of years. While the desert Southwest bears little meteorological resemblance to South Asia, the “North American Monsoon” is, apparently, a real thing.

Whatever the case, the forecast for Sunday looked tricky. Several forecasts suggested rain and lightning would hold off until the afternoon. But of the myriad weather models we obsessed over, one suggested lightning as early as 9 am.

We stood there debating for a while. Kit Carson required a degree of commitment. You had to ascend and descend a nearby sub-peak (Challenger Point). What if the weather turned for the worse with hours of above-treeline hiking left?

The Gentle Giants of the Sawatch

We opted for a simpler objective: Huron Peak. With 3500′ of elevation gain over 6.5 miles, we could get up and down early. We’d have little commitment risk. Plus we were super close to dispersed camping spots for the peak. And so we headed into the Sawatch.

Of the 58(ish) fourteeners in the Rocky Mountains, a whopping 15 reside in Colorado’s Sawatch range. This includes the three highest peaks in the Rockies: Elbert, Massive and Harvard.

Despite these superlatives, the peaks are all low-angle (Class 1 and 2) ascents. None of them require much hands-on scrambling. That said, what they lack in technicality, they often make up for in sheer effort. Many of the Sawatch fourteeners require well over 4000 feet of elevation gain.

Huron Peak provides an excellent introduction to the Sawatch. The hike ranks among the quickest, easiest, and most scenic in the range. These words are, of course, all relative. As a warning sign on Quandary Peak states frankly: there’s no such thing as an “easy” fourteener.

We arrived at the upper trailhead roughly an hour before sunrise. Donning headlamps, we tramped up switchbacks through pine forests towards the treeline. As the sun began to make its presence known, the moody sky lit up in jewel tones. Hiking in a rainstorm may be no fun, but this kind of weather makes for some stunning photographs.

Roughly halfway up, the trail flattened out into a broad, treeless plateau beneath the peak. Here we got a clear view of the remaining ascent to the summit. We passed a small lake that seemed perfect for a backcountry campsite.

We pushed on to the summit. Switchbacks brought us up to the high, rocky ridgeline. After two weeks back East, at sea level, I was really feeling this one. Towards the summit progress became a bit stop-and-go for me.

Visibility came and went as we ascended towards low-lying clouds. And then there were some light flurries. I inspected some of the flakes as they landed on my black ski gloves. This was my first time experiencing snowfall in August.

Finally, we topped out. As luck would have it, the weather seemed to rapidly improve from there. In fact, by the time we were descending towards the treeline, the basin beneath Huron Peak had emerged into full sunshine! Mother nature was clearly toying with us.

All that said, I fully enjoyed our pared-down adventure. Each and every fourteener provides a wonderful excuse to lace up your hiking boots and enjoy some stunning Colorado scenery. You don’t need a bluebird day to enjoy the mountains. In fact, cloudless skies make for some really flat photos. Just use sound judgment, consider changing your objective, and be prepared to turn around.