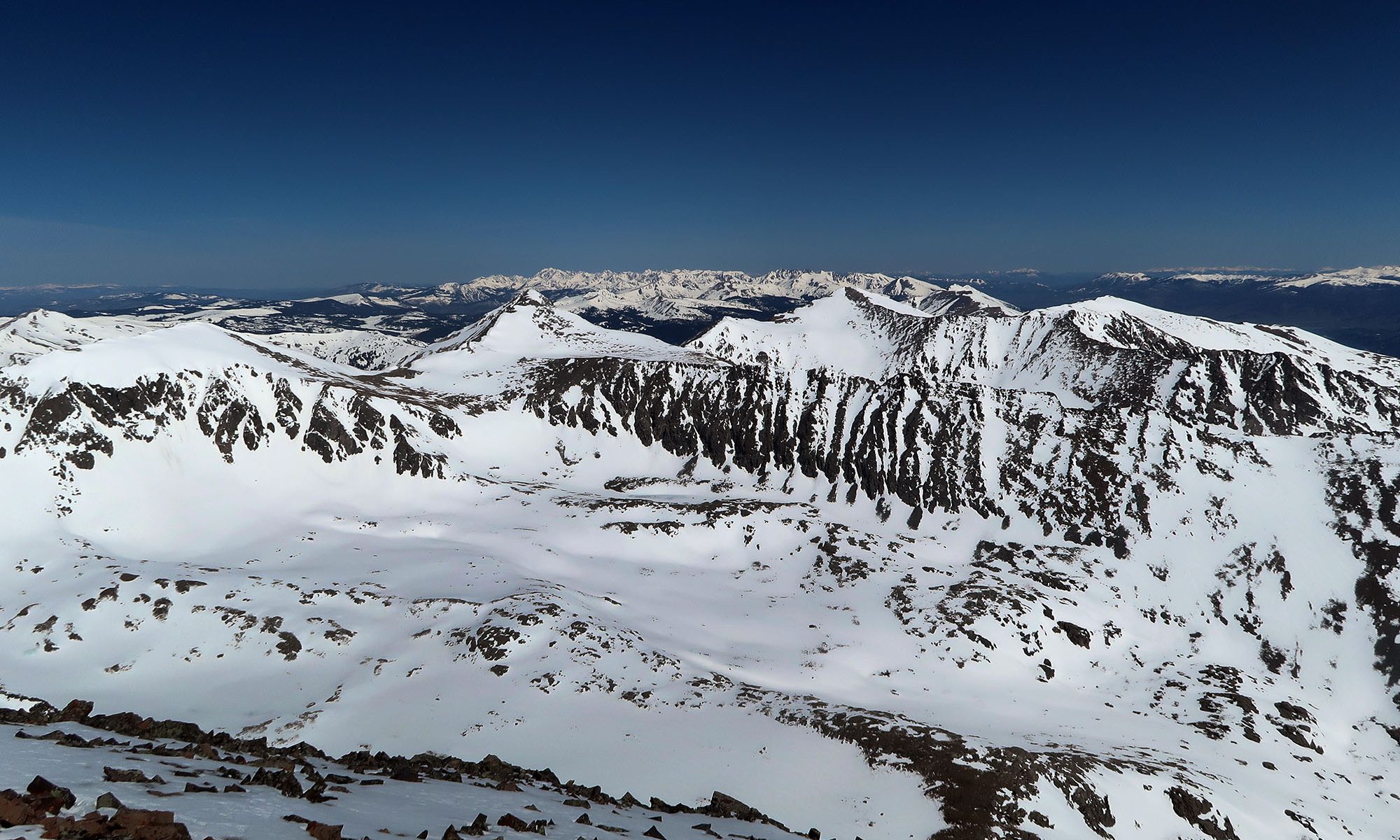 The day began with a pre-dawn drive under the continental divide along I-70 (11,000′) from my hotel just above Golden, CO (7,200′). I sped past the Dillon Reservoir, shimmering in the day’s first direct light. From there, I pulled off the highway and headed south through the resort town of Breckenridge, at 9,600′. After Breck, the road climbed even higher, back towards 11,000′ and the trailhead for Quandary Peak.

My phone said today was the Cinco de Mayo. But at 11,000′ in the Colorado high country, it was 20F, icy, and snowbound. The nearby ski resorts were still fully blanketed in white, but skiing had ended over a month ago due to the COVID-19 pandemic.

I quickly laced up my hiking boots and strapped on my pack. I tied snowshoes to the back of my pack with some climbing rope. Then I hit the trail.

The trail began within a pine forest, rapidly gaining altitude via some subtle switchbacks. Early on a sign warns of what is in store: “There’s no such thing as an easy fourteener!” That said, Quandary is among the easiest of Colorados 50-something peaks above 14,000′.

Cold overnight temperatures had frozen the snowpack solid, but I knew things would be different by midday. The “trail” was a veritable minefield of massive postholes, now frozen solid. Footprints split off around various tree wells and through speckled clearings in the forest. But in general, I managed to efficiently find my way to treeline.

A mile and 600 vertical feet from the parking lot, the trees grew sparse and the views opened up. I could see straight up to the higher ridgeline at 13,000′, still 1400′ of climbing above me.

Mountains are deceptive creatures. I believe we humans are fundamentally incapable of truly understanding how massive they are. The high ridgeline seemed so close: perhaps 20 minutes of walking away. It would remain that way for the next hour.

Onward to the high ridge

Eventually, the trees ceased altogether. But looking up and down I realized I was still nowhere near that darn high ridgeline. Of the 3,300′ of vertical I needed to ascend that day, I had achieved perhaps 1,500′. And having been at roughly sea level under 30 hours ago, I was starting to really feel the altitude.

Soon thereafter I passed a few hikers. One solo adventurer told me to turn around. “There are 80 mph winds on the summit,” he told me. I was very surprised to hear this. The forecast had predicted 30 mph top speeds.

I eventually reached the ridgeline, and the trail briefly flattened off with a stretch of bare rock. A few fellow hikers were huddled here against howling wind. The thermometer likely read 20F, but it felt so much colder. I switched to my mittens and put on my ski goggles and balaclava. Never before had I felt the need to do so on an ascent. I had hiked in far colder temperatures back East, but never this far above treeline.

I pressed onward to the summit. I was now well above 13,000′, and over 2000′ vertical feet into my hike. Each step became rather exhausting. Around treeline, I donned my snowshoes, for both traction and the heel lock. Those small metal stands made all the difference on these steep, snowy ascents. But regardless, the ascent was pretty brutal.

For the past 30 minutes, I had debated what to do if I indeed found 80 mph winds atop the summit. I’m a smaller guy (5’5″) and could imagine quite vividly getting blown clear off the mountain. I decided to find out for myself how bad it could be.

As luck would have it, the wind began to abate as I continued my climb. All was well on this sunny bluebird May day. A group of skiers began their descent from the summit into the bowl to my right.

Twenty agonizing minutes later, I had reached the narrow, flat path to the peak’s summit. The winds were formidable but definitely well below any dangerous sort of level. And the views were stunning.

And just like that, I’d summited my very first Colorado 14er. Snowcapped peaks and deep blue skies surrounded me in all directions. It was stunning.

This inaugural summit in my Colorado 14er journey happened to coincide with the apex of the COVID-19 pandemic. It was a very bizarre and anxiety-ridden time to be moving across the country. As a sort-of precaution, I bought a pulse oximeter, to monitor my blood oxygen saturation level.

It turns out this device is also super useful for understanding what happens to the human body at high altitude. Beginning the morning before this hike, in Kansas City, MO at 800′, I began periodically recording my blood oxygen.

My blood oxygen normally resides between 96-98% saturation. This is fairly typical of healthy adults. Sure enough, my readings in KCMO came in around 98%. The day prior I had driven through Denver and then up to Loveland Pass at 12,000′ before hiking a nearby 13er. My blood oxygen dipped to 84% by the end of that hike.

And throughout this day, I likewise recorded my blood oxygen. The following chart chronicles the journey (hover with your mouse for details).

Using a pulse oximeter, I recorded my blood oxygen saturation at various times and places in and before traveling up through Colorado and up Quandary Peak. At sea-level, my blood oxygen tends to sit between 96-98%, which is a typical range for healthy adults. Someone with advanced pneumonia can see their blood oxygen drop below 50%.

While 96-98% is fairly typical for healthy adults at sea level, patients with advanced pneumonia can see readings below 50%. How low did my oxygen levels get on the summit of Quandary? 63%! I was frankly rather shocked. I didn’t have a headache or feel super short of breath. But the final push to the summit definitely felt pretty exhausting.

It occurred to me that oxygen levels could perhaps dip during strenuous exercise at any altitude. While hiking rarely involves sustained anaerobic exercise, the theory seemed plausible. I tested this by doing a rapid hike up 2000 vertical feet in the Bay Area, near my new apartment. Throughout that effort my blood oxygen never dipped below 95% saturation.

Lost in the woods

I began the long slog back to the trailhead. The heat of the day was rising and the snow began to turn quite slushy. Around tree line I realized countless footprints were entering the woods in all sorts of random places. I chose one path that felt pretty well tracked out.

But 10 minutes later those tracks ran dry. I followed some ski tracks a bit further. But I was pretty much lost. After circling around for another 10 minutes, I pulled out my phone. There was no cell service, but I had a map cached on AllTrails. Sure enough, I was far south from the trail. I adjusted my course and made my way back.

That’s when I heard a young woman calling out. She had been lost for hours. She eventually made her way towards me (I had to continually shout). With every step, her legs sank deep into the now-slushy snowpack. She had no flotation devices with her. Her lips were pure blue.

After lending her a snowshoe and giving her perhaps 20 minutes to collect herself, we both hobbled slowly down the mountain. She had been wandering for a couple hours with no map or compass. Her last meal was some granola before dawn. She was wearing leggings and some low-rise snow boots, and complaining about how wet her feet were. This was more or less a textbook case in how not to go hiking.

Down to lower elevations

Eventually we arrived back at the carpark. I bid the young woman adieu, checked my oxygen one last time, and then made my way back to Breckenridge for a well-earned lunch. My first Colorado 14er had been a success!

My day continued as I pushed westward towards my final destination of California. Today would end in Grand Junction, Colorado, roughly 10,000 vertical feet below Quandary Peak’s summit. I was blown away by the desert/mesa landscape I arrived in. It was the same day in the same state, but an entirely different climate!