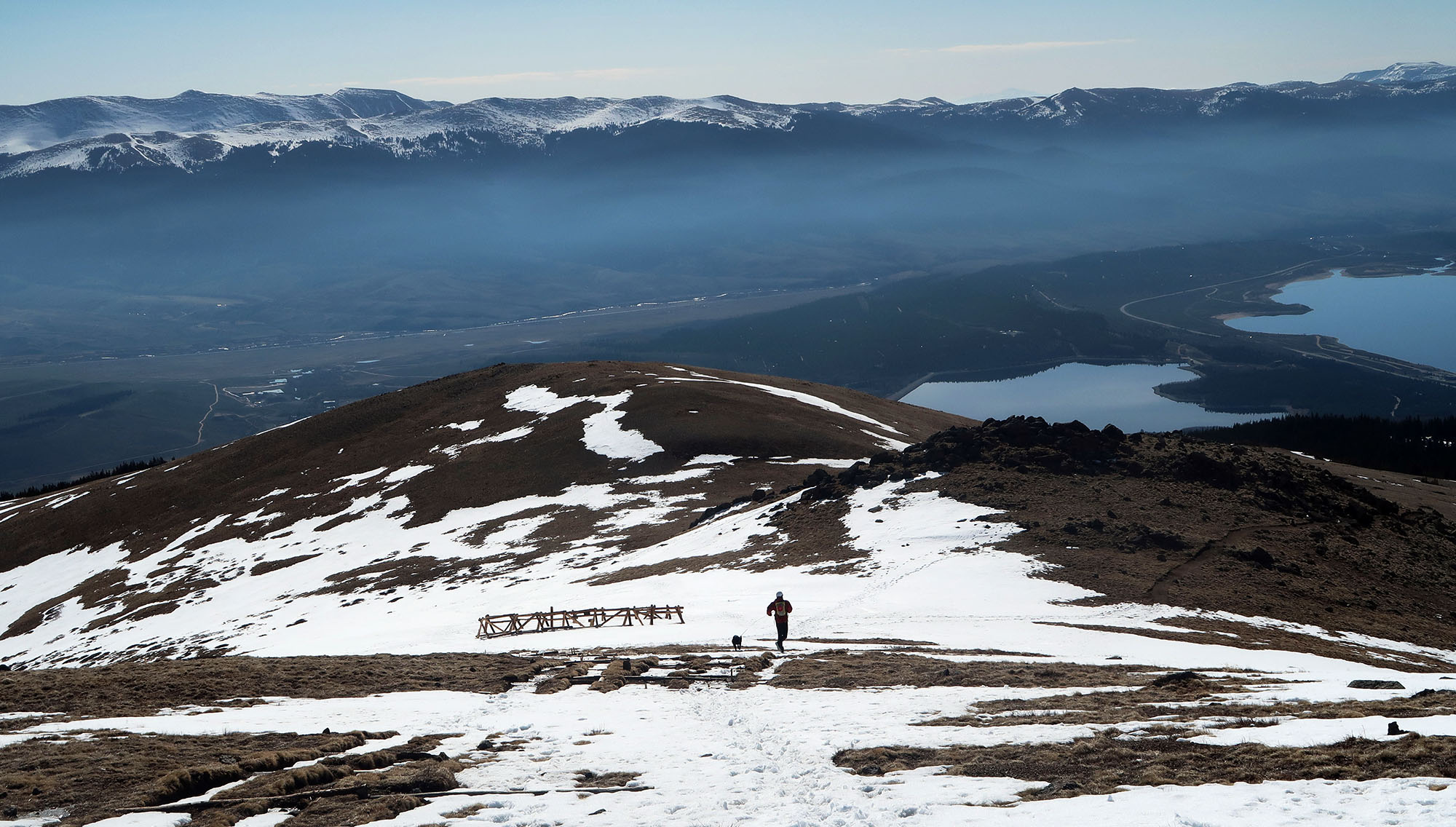 Mount Elbert sits in the Northern Sawatch Range, just southwest of Leadville, Colorado. At 14,433′ its summit forms the highest point in Colorado and all of the Rocky Mountains. In fact, only one summit in the lower 48 stands taller (Mount Whitney).

Despite this accolade, Elbert also features a few of the most straightforward ascents among Colorado’s 14ers. Two of its standard routes (the East Ridge and the Northeast Ridge) are “class one” hikes: simple dirt paths with little exposure or rockfall risk.

My ascent occurred on a sunny Saturday in mid-May. With plenty of snowpack still on the ground, I opted for the East Ridge route: one of the safest 14er ascents in terms of avalanche and snow risk.

I parked at the “lower trailhead” just above Twin Lakes. This trailhead sits just beyond a fully paved roadway, making it accessible to any vehicle. More adventurous drivers can proceed two miles further to a trailhead that starts a helpful 800′ higher in elevation.

I hiked up the rougher dirt road towards the upper trailhead. The snow had melted completely around these elevations (10,000′). But large rocks and a stream crossing left me feeling OK about ditching the car a bit earlier on. I think any high clearance AWD vehicle could handle this road. But it never hurts to play it safe.

From the upper trailhead, the journey continues along a short stretch of the Continental Divide Trail. This trail parallels the great divide from Mexico to Canada, along a rugged and remote network of trails through New Mexico, Colorado, Wyoming, Idaho, and Montana.

My brief mile or two along the CDT took me through some lovely aspen groves, with views of the sunrise over the nearby Mosquito Range. The trail also passes by a couple of seriously well-engineered beaver ponds.

A steady ascent through changing landscapes

Mount Elbert may feature some of the least technical hiking among Colorado’s 14ers. But the total effort involved is still formidable! My ascent would involve nearly 5000 vertical feet of elevation gain, over a round trip distance of over 14 miles.

Soon enough, the trail left the CDT and began its ascent in earnest. I followed it through a trio of giant switchbacks through aspen, and increasingly, evergreen forests. The views of the valley between the Sawatch and Mosquito ranges grew more expansive.

The trail began to alternate between bare earth and thick snowpack. Under tree cover, the snowpack remained frozen solid and easy to negotiate. But on sunnier, open stretches, the snow on these lower slopes had failed to freeze overnight. Most hikers had abandoned some newer portions of the official trail. I made the mistake of sticking to the route, which led me to deep, soft snow. Luckily this only lasted perhaps a quarter-mile.

Soon enough I left the trees behind and began a pleasantly low-angle ascent along a prominent ridge. This portion of the Sawatch was hardly rugged or charismatic in the way one thinks of the Rocky Mountains. Instead, it featured broad, rounded massifs with gentle slopes.

Finally, I reached the upper mountain slopes, where the snowpack reasserted its presence. Luckily the trail had re-frozen overnight and proved easy to traverse on snowshoes.

Towards the summit of Mount Elbert

I trudged onward towards the broad, frumpy summit. It’s a tad disappointing to discover the higher point in the Rocky Mountains is kind of just … a big mound of rocks. I mean no disrespect to Elbert and the Sawatch Range, but this is hardly Lake Louise or the Maroon Bells.

This ascent represented only my second fourteener of the season, preceded only by a much shorter ascent on Bierstadt. And this lack of conditioning really began to show on the home stretch. Elbert’s summit lies a full 433′ above the magic 14K mark. As it grew near, my pace slowed to a crawl. I grew winded on seemingly every step.

Somewhere above 13.5K I decided to treat this like a high-intensity interval training session. I would force myself to march a steady 50 paces upwards. Then I’d stop to pant and gasp until my lungs were no longer screaming. I repeated this process ad nauseam, inching closer to the summit.

Soon enough I stood atop the highest point in the Rockies. I found just a handful of other hikers at the summit. It was too early in the season for the crowds.

Trail Magic along the East Ridge

Sadly, I didn’t get any high-quality pictures from the summit. Somewhere around 13K feet, I had left my good camera alongside the trail. Descending, I scanned the snow and rock for some sign of my camera in its small case. No dice.

That said, I wasn’t too worried. The black case would have stood in stark contrast to the white snow. I was fairly certain someone had picked it up for safekeeping.

I trudged downwards, through the snow, then bare tundra, then spruce stands, then aspens. Hours later, I arrived back at the upper trailhead.

Sure enough, someone had found my camera. It stood perched atop a wooden post near some forest service signage—trail magic at its finest!

I continued down the dirt road towards the lower trailhead. Along the way, I passed some pretty sweet dispersed camping setups. These were mostly occupied by folks with vehicles more rugged than mine: jeeps and trucks. Against the backdrop of the snow-capped peaks of the Sawatch, it looked straight out of a car commercial.