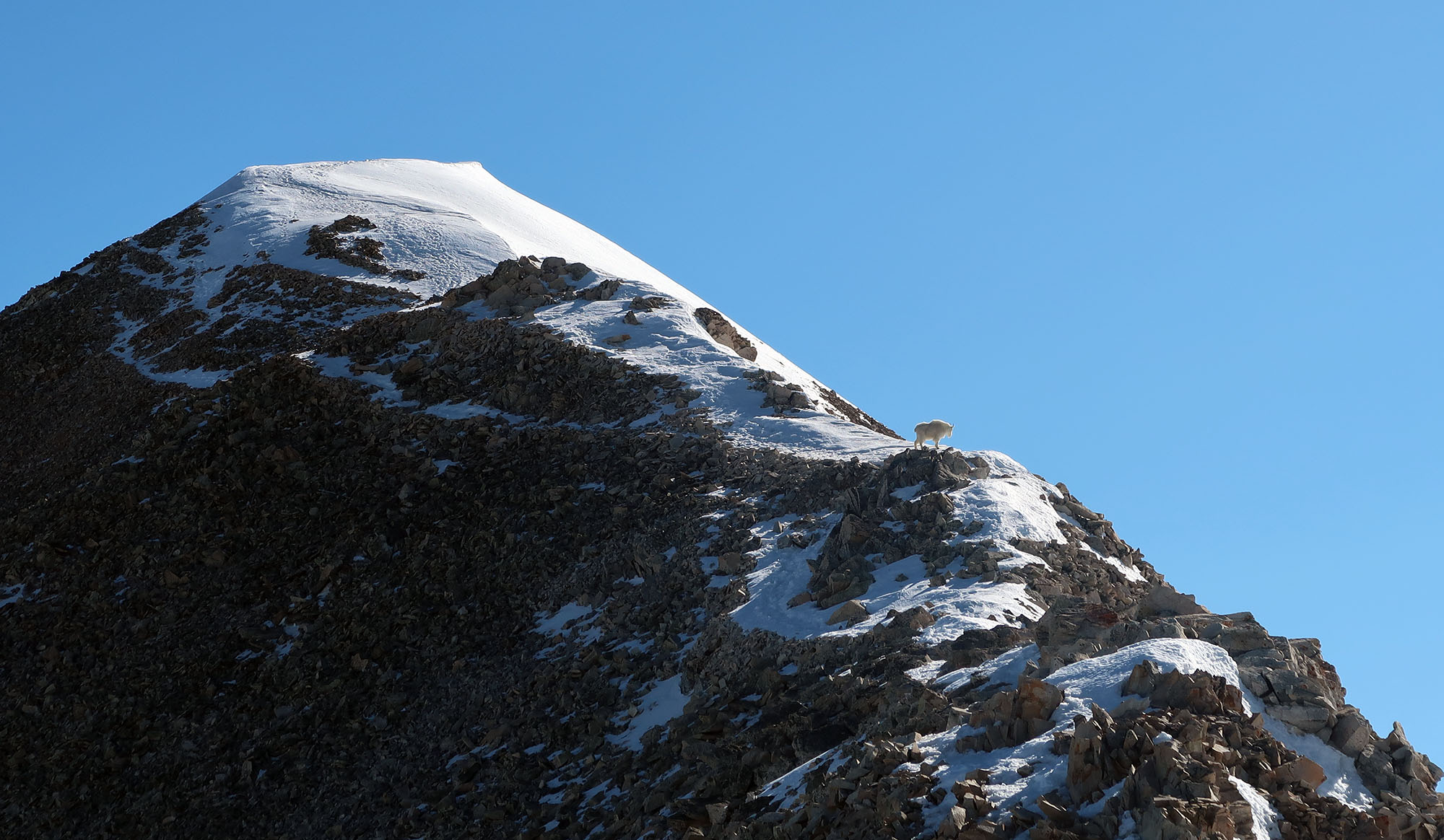 I arrived via Four Mile Creek Road, shortly after dawn. I parked just after “horseshoe bend” and the last improved structure, in a large parking lot around 11,400′. Among Colorado’s Fourteeners, Mount Sherman is known for having perhaps the shortest vertical ascent. In summer, the “trailhead” begins at a locked gate in the road at 12,000′. But in late May, you need to park roughly 600 vertical feet further downhill.

Either way, the hike begins with a gentle ascent up an old mining road. Along the way, the mountain’s mining history comes to life. I passed perhaps a half dozen large mining structures, all in a picturesque state of disrepair.

Despite being nearly June, the upper two-thirds of my journey would be entirely coated in snowpack. Soon enough, the road disappeared beneath a blanket of crusty white snow, and I donned my snowshoes.

In summer, Mount Sherman ranks among the least technical ascents. But in May, the main trail onto the ridgeline was blocked by a sizeable cornice. This curled, overhang of snow would be dangerous to ascend directly. My instincts told me to head towards the left (Mt Sheridan), but all the accounts I read online said to use a steeper right-hand approach.

Luckily, I had rented an ice ax in town before this journey. As the snowfields grew steeper, I put on some trail crampons and walked cautiously upwards with the ax at my side.

Before long, the snowfield ended, and a somehow-even-steeper scree field began. From this vantage point, I could see the col between Sherman and Sheridan, which was flat and broad and devoid of snow above the cornice. I decided on the descent, leaving the ridgeline from the far side of the col would be the safer bet.

This off-trail ascent avoided the unstable spring cornice. But it grew very steep very fast! Luckily I eventually gained the ridge, somewhere around 13,500′. Now I was back on the proper trail to the summit.

The high ridgeline was rocky and rugged, but never too exposed. It was mostly devoid of snow and ice too, which made things feel even safer. Ahead in the distance, I saw a very furry and sure-footed fellow climber.

I pushed towards the summit with surprising speed and efficiency. It seems my impromptu HIIT training on Mount Elbert the weekend prior had paid off in terms of proper conditioning. In short order I arrived on the summit.

I ran into a few back-country skiers on the summit. They were waiting for the sun to soften up the snow before descending on one of the last continuous snow routes left on the mountain. After a very warm spring, the ski season was almost entirely at a close in Colorado.

Mount Sherman takes its name from the Civil War general William Tecumseh Sherman. Sherman took Union forces deep into enemy territory, carving a path of total destruction across the industrial heart of the Confederacy. This campaign became known as “Sherman’s March to the Sea”. It was a controversial example of “total war”: they destroyed towns and businesses and infrastructure, rather than simply fighting formal battles on open fields.

Sherman’s campaign was ultimately successful, helping to break the Confederacy and end the long war. And his is not the only Colorado 14er commemorating a major hero of the Civil War Era: just north lies Mount Lincoln, the highest peak in the Mosquito range.

Warmed by the mid-morning sun, and feeling strong with plenty of gas left in the tank, I began my descent. As planned, I stayed on the ridge right down to the col, and up a short way towards Mount Sheridan. Here, I ran into the same solitary mountain goat from earlier.

From there, I enjoyed two long and fast glissades down the snowy, steeper slopes. Glissade is a fancy word for “butt sliding”. On a steeper open slope like this one, it’s important to take some safety precautions before attempting a glissade. I used my ice ax, with the pick stuck behind me in the snow. This helped me regulate speed and “steer” to an extent. In a pinch, it’s very easy to go into a self-arrest position using this technique. I should also mention that glissading in crampons is a big no-no.

In short order, I arrived back on the dry, gravel roadway. The sun climbed higher into the sky, and soon I was down to a t-shirt and sunglasses. Before long, my brief but enjoyable journey on Mount Sherman had come to a close.