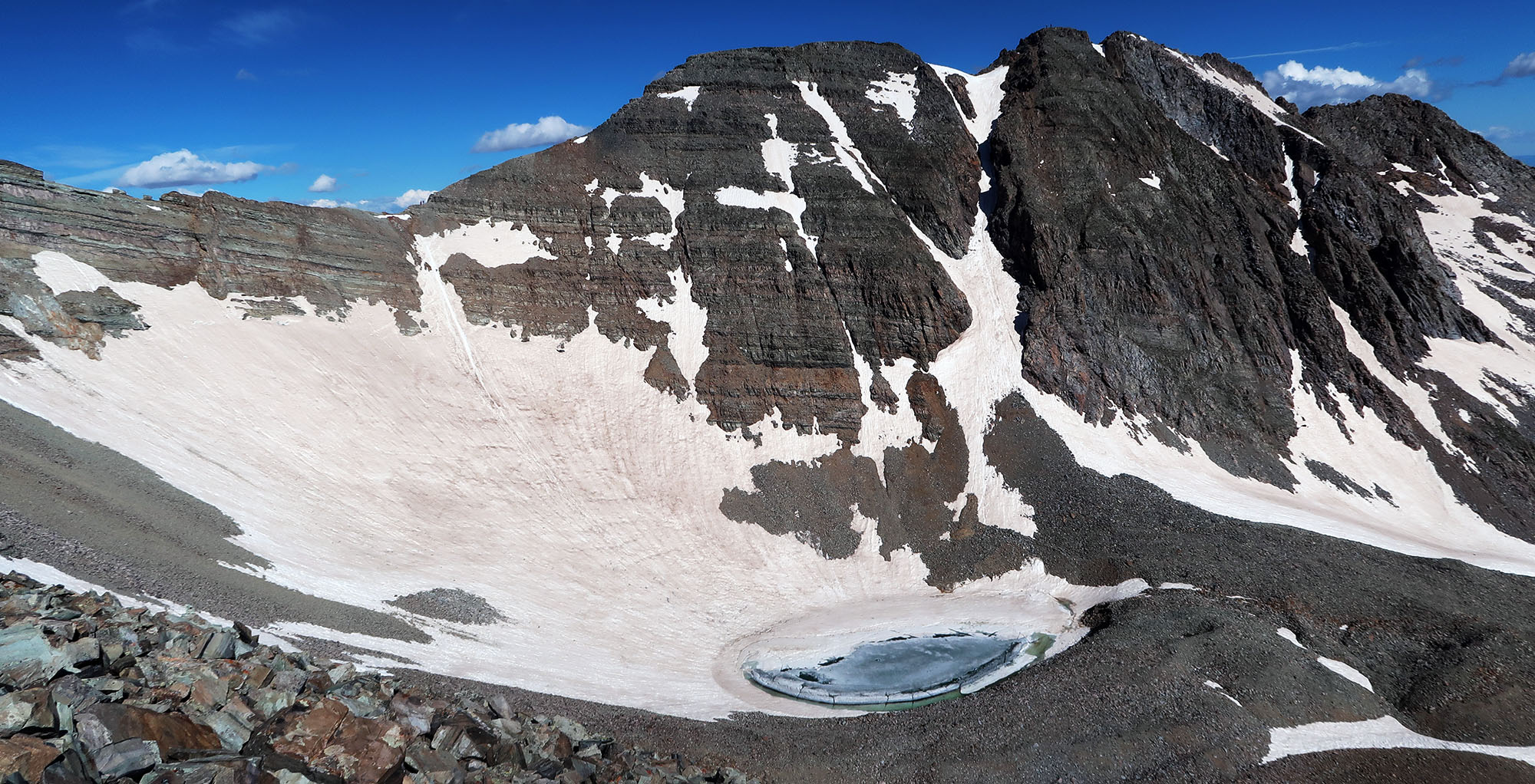 We arrived at the Castle Creek trailhead around dawn. We drove the rough, 2-wheel drive road up towards 10,000 feet, parking just below the creek crossing. And after fiddling with some gear we were off, up the long dirt road towards Castle and Conundrum peaks.

I had low expectations heading into this trek. Many folks complain about the long road walk into the peaks’ drainage. They bemoan the loose rock and exposure. And, once the snow melts, hikers detest climbing back over Castle after bagging Conundrum and doing the whole process in reverse.

All that said, this adventure would continually exceed expectations. In fact, I’d go as far as to call Castle & Conundrum one of my favorite 14er outings to date.

For starters, the road walk proved relatively harmless. You gain 2,800′ (a lot of vertical!) but it comes slowly, over the course of nearly 5 miles. This proved to be a fast, mellow ascent. In perhaps 2.5 hours, we found ourselves at 12,800′, where the “real hike” begins. And thanks to our early start, we made it up to the basin before experiencing any direct sun.

Of course, if you’re the proud owner of a wrangler or ATV (or willing to shell out the money to rent one), you can make it to nearly the end of the road. A recent rockslide over the roadway prevented a jeep from making it the last quarter mile.

Up towards Castle Peak

We had arrived within 1500 vertical feet of our target, and I had still never caught a glance of Castle Peak. You certainly don’t see it from the town of Aspen. I’m sure skiing at one of the nearby resorts you catch a glimpse. But the highest peak in the Elks hardly commands any sort of presence. Whereas Maroon Peak, Pyramid, and Snowmass all provide postcard and influencer-worthy backdrops, Castle & Conundrum hide out in the center of the range.

Where the road ends, the route continues up a steep headwall to the upper basin and lake. Nearly all of Colorado was dry as a bone by late June, including numerous 14ers to our South and East. But broad snowfields still lingered in the Elks. We had our choice of talus or snowpack. Loathe to break out and soil our microspikes, we chose talus.

Then began steep switchbacks up the northeast ridge of Castle. This passed over some loose scree slopes. But I found the trail to be in excellent shape with minimal exposure. So far so good.

A view of the glissade

We continued up the northeast ridge, treated to stunning views of the amphitheater formed by the two peaks. Now fully visible, I came to appreciate how Castle’s ridgelines do kind-of, sort-of resemble ramparts.

But the scene that mostly stole our attention was the glissade route between the two peaks. A band of peak baggers on dawn patrol had already reached this infamous glissade descent. And from across the basin, it looked incredibly steep. We could see them slowly inching towards a clearly visible butt-width trench down the slope. Occasionally we’d hear screams of joy (terror?) as they sped down the fall line.

I’d spend the next couple of hours agonizing over whether or not I felt comfortable doing the glissade. We came prepared with proper ice axes for the descent. What made me even more nervous: the snow had melted out towards the top ridge. This meant down-climbing some steep, loose choss en route to the slide.

Castle and Conundrum receive the somewhat rare “difficult class II” designation on 14ers.com. A Class 3 peak will typically involve scrambling up ledges with ample exposure. A Class 2 peak will usually be chill enough to amble about hands-free, and suitable for most large, athletic dogs. “Difficult Class II” is somewhere in between. You can get more scree slopes, steeper ascents, some “considerable exposure” and occasional hands-on action.

All that said, I’m never quite sure what to expect on these peaks. You hear trip reports that range the full gamut from “I do the Capitol knife edge in my chacos” to “Quandary was horrifying!” (the former is Class IV, the latter Class I).

But the designation made a ton of sense in retrospect. We were lightly thrilled by some hands-on action and a couple of moments of, well, considerable exposure. I found it way less exposed and scary than South Maroon, a nearby Class III ascent. And it was definitely less hair-raising than Sneffels, with its “easy Class III” V-notch move.

At any rate, we thoroughly enjoyed the adventure up to Castle’s summit. The rock was solid and the views were stunning. The Elk Mountains are definitely among Colorado’s most beautiful.

Webster defines a ‘conundrum’ as a difficult problem or paradox. Supposedly prospectors had found bits of gold in nearby Conundrum Creek. But the hints of fortune never led to the “motherlode” or the main vein of metal. Quite a conundrum indeed.

The peak and the creek also share their names with Conundrum Hot Springs, a coveted backcountry soaking experience.

But with no soaking in our near future, we began the traverse down and up between Castle & Conundrum. The journey proved mostly uneventful with airy views in all directions.

Next, we ascended the steep pitch towards Conundrum’s south (false) summit. From there we ambled over rocky ledges towards the true summit.

Conundrum ranks as one of four “fake fourteeners”. The traditional list of 58 peaks includes a handful with less than 300 feet of prominence. But the charismatic peak deserves a spot on the list, in my opinion. Particularly given its intense, coilour descent, popular with backcountry skiers in early spring.

“Glissade” is a mountaineering term for butt sliding. Importantly, a glissade involves a controlled descent. You use an ice ax, firmly planted in the snow, as both rudder and brake. Should things get a hit too hairy, you can easily revert into a “self-arrest” position without moving your hands on the ax.

If you time Castle & Conundrum right (usually early-to-mid-June), you can experience a dry ridgeline and a fully snow-covered saddle. Under these conditions, the glissade makes for a fun, quick, and relatively safe descent into the basin.

We had arrived a bit later than optimal, so the top of the route had already melted out. But with some persuasion from my way-more-enthused hiking buddy, we went for it. And I’m super glad we did.

The initial crabwalk down was predictably terrifying. Here I repeated sunk my ax’s shaft into the scree, using it as a pseudo anchor, in case of a slip. We inched towards the start of the slide path. Many butts before us had carved a deep, occasionally rock-strewn sluice within the snowpack.

My friend went first. Halfway down he flipped into essentially a self-arrest position, continuing slowly over the steepest section. When he bottomed out, I went next. I was a bit more loose on the throttle, only briefly going into self-arrest once. At points I really needed to dig in with the ax to avoid losing control.

I felt a rush of andrenaline. Pausing below the steepest portion, I let out a primal scream. Then I was quick to clarify it was A-OK.

We had perhaps four or five smaller and shallower glissades from there. These came between some traversing across snow and talus. But we never donned microspikes and we almost exclusively descended on our bums. It’s a rare and beautiful experience to avoid any steep downclimbing for over 1000 vertical feet!

I came with low expectations but found this hike to be truly incredible. The road walk takes time but not too much effort. The ridge scramble is a perfect segue from safe and sound Class II to something a bit more adventurous. The rock proved solid. And the glissades in June are phenomenal.

If you have access to a proper off-road vehicle (or just a Wrangler or high clearance truck), this could be a surprisingly low-effort experience. Drive to 12.8K, scramble the ridge, and slide on down. Either way, I strongly recommend timing your adventure to the snowpack. And bring an ice ax! You can rent one for the day at