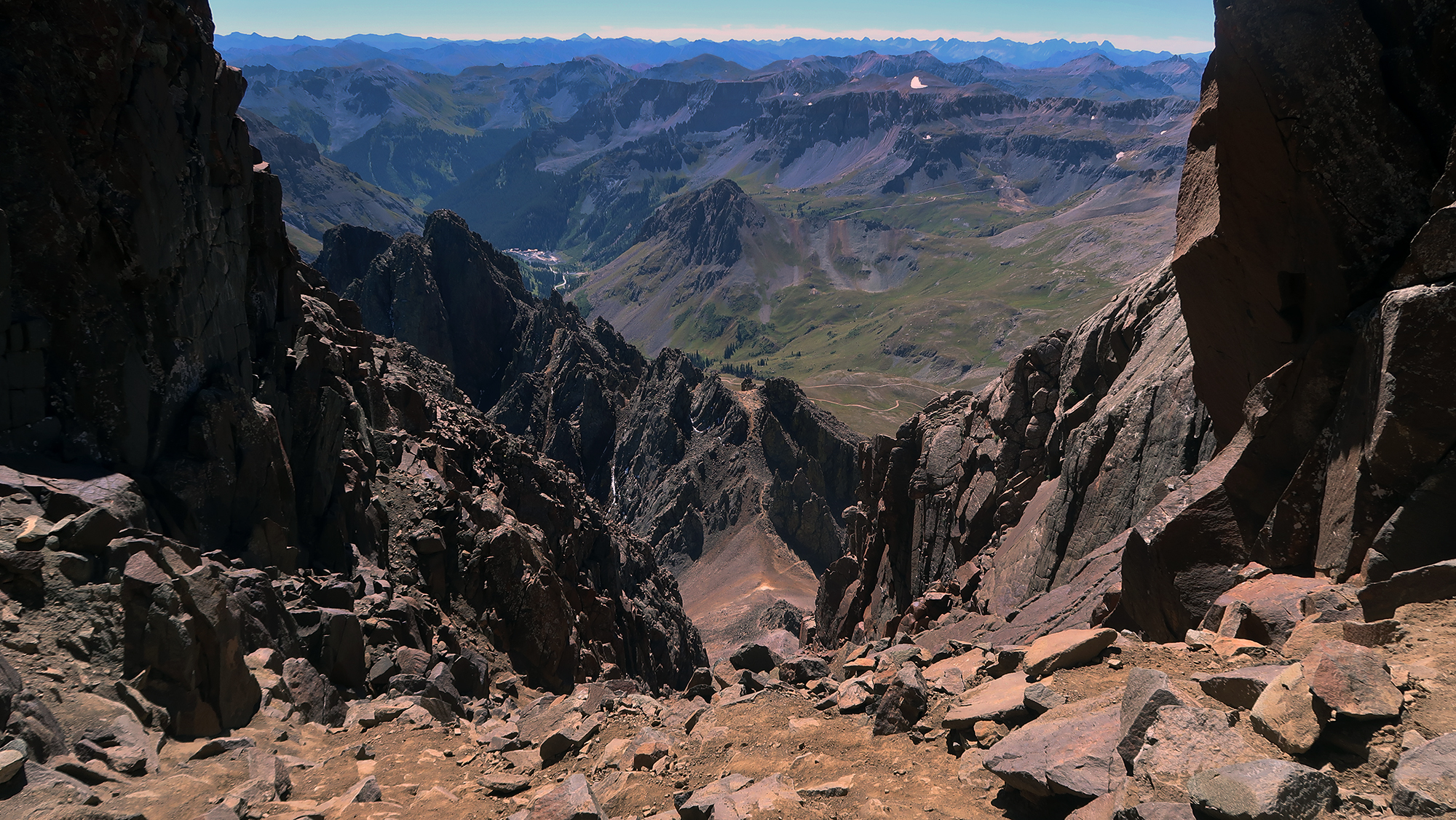 Journey to the Center of the San Juans

My Sneffels adventure came towards the end of my first year bagging fourteener peaks in Colorado. That was no accident! Sneffels sits, tucked away in the San Juan mountains of Southwestern Colorado. This large, rugged range lies many hours from major metros like Denver. Some of the trickiest fourteeners reside in the San Juans.

Mount Sneffels provides a rare “entry level” Class III experience for progressing 14er enthusiasts. Mountain ascents range from Class I (sidewalk-like trails) to Class V (vertical rock climbing). While anything from Class II to V can be either super safe or downright treacherous, things generally start to “heat up” around Class III.

The adventure begins with a dirt road from the tiny town of Ouray to “Yankee Boy Basin”. The road features some intense rock overhangs and steep falloffs. The portion I drove works fine for 2WD sedans. That brings you to roughly 10,800′. Not too bad! But with a Wrangler or ATV you could go much further towards 12,400′. I saw plenty of folks “jeeping” in Yankee Boy Basin that afternoon.

Mount Sneffels takes its name from a volcano known as Snæfell in Iceland. The latter summit featured in Jules Vern’s novel Journey to the Center of the Earth as the departure point into the Earth’s mantle. Pretty cool stuff.

The peak cuts an exceptionally impressive profile from across the low-lying valley en route from Ouray to Telluride. That view has been immortalized on the new Colorado driver’s license.

Roughly half the ascent from the 2WD parking takes place along jeep roads. I powered through this section at a rapid clip as the sun rose higher into the basin. It’s a little annoying passing by jeeps and “trailhead” signs halfway through a hike. But all part of the adventure.

The steeper “second half” of the ascent mostly takes place on two steep scree slopes. The lower and larger of the two brings you out of the basin and towards the mountain’s high ridge line. This section is technically Class II, but it was materially steeper than any route I’d done in the Sawatch, to date.

That said, I felt mostly secure on this portion. The giant boulders felt “secure”. A fall would take me down between these massive rocks. That might hurt a lot, but it wouldn’t involve tumbling down the mountain! The left side (facing uphill) had the better boulders.

As I rose higher, I saw progressively more of the jagged ridge lines that form the core of the San Juans. These peaks definitely felt unique among Colorado’s mountain ranges.

The second scree slope turned towards the left. It ran through a high-walled gully. Somehow it seemed way steeper than the first! The rock also grew more loose.

Through the V-Notch to Mount Sneffels

The final “crux” of the route lies just below the true summit. Atop the steep gulley, you come to a “V Notch”. The notch has gained a level of (in my opinion, deserved) notoriety. The rock is quite solid. And anyone in good shape with decent balance can negotiate the notch with little trouble. But the brief scramble requires full hands-on climbing. And most concerning: the route sits quite exposed. You will not fall to the left. But if you did …

This one crux graduates Sneffels from a “difficult Class II” ascent to a “beginner Class III” according to 14ers.com. I resolved going in not to look left. As I approached the “V” I kept my eyes firmly planted on the route. I wedged my boots into the crack and powered up through the notch. I never looked back.

Immediately after exiting the notch, I caught a new sight: Telluride! Past jagged peaks in the foreground was a steep, forested slope with cut trails plunging into a narrow box canyon. This was my first time seeing the famed ski resort.

After some quick summit snacks, I began my descent. At the V-Notch, I once again refrained from looking anywhere beyond the trail itself. I turned around and back-climbed down through the notch. After shimmying across to the gully, I finally allowed myself to survey the route’s exposure. And yeah … it looked rather harrowing.

A couple dogs waited obediently for their owners beneath the V-Notch. The crux presents an insurmountable obstacle for most four-legged friends. That said, dogs have summited all 58 Colorado fourteeners (though with some human support).

I carefully negotiated my way down the steep gulley to the base of the high ridge. My brain seemed to be slowly renormalized its definition of “steep”. By the time I was at the ridge, the scree field down to Yankee Boy Basin looked downright tame. A couple hours later I arrived back at the car. Sneffels was in the books and the soothing hot springs of Ouray were calling my name.

3 Replies to “Mount Sneffels via the South Slopes”