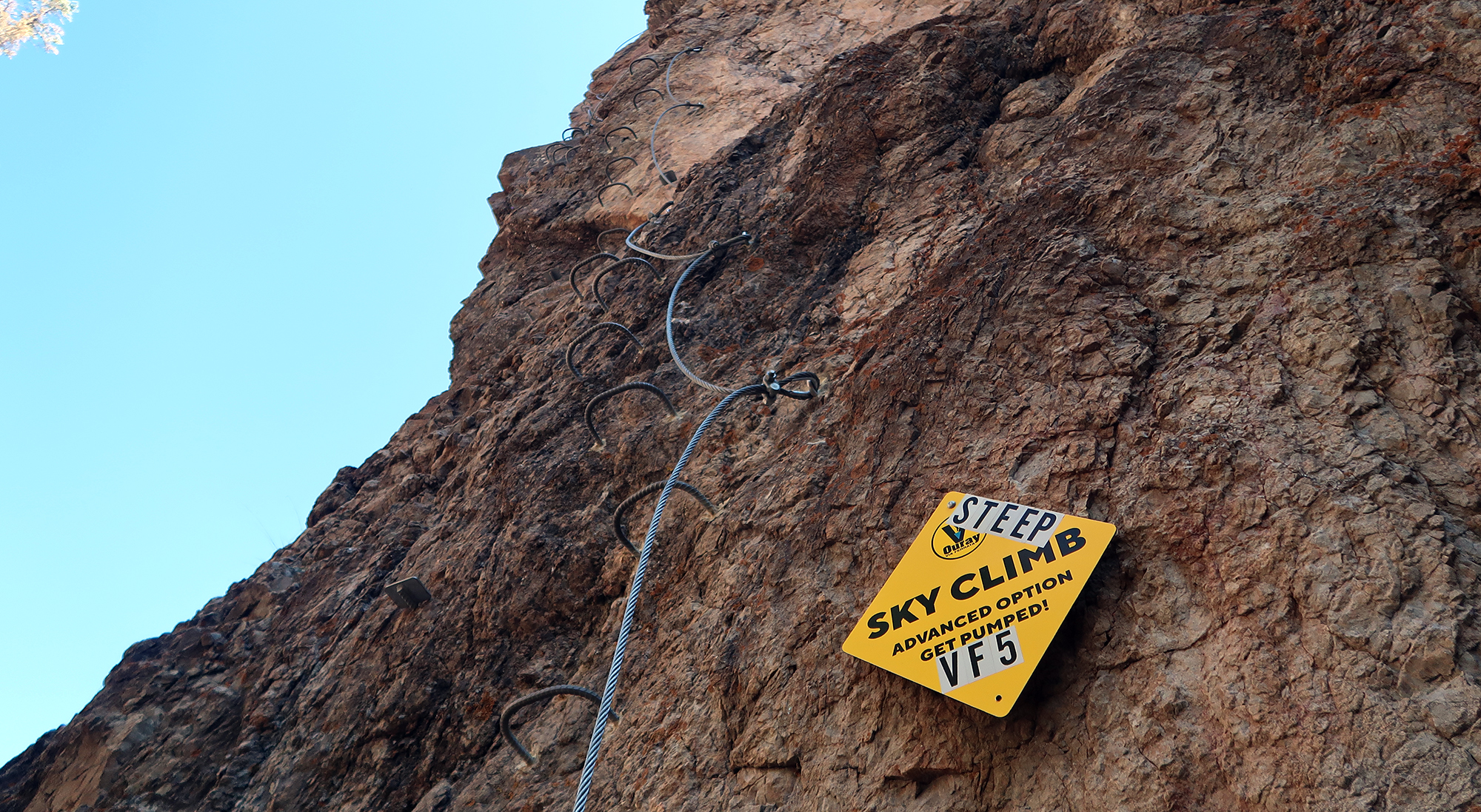 My day began in the tiny town of Ouray. The former mining town sits nestled in a dramatic box canyon deep in the heart of Colorado’s San Juan mountains. The adorable city provides a point of departure for myriad outdoor pursuits, including hiking and ice climbing.

Among the town’s many outdoorsy assets: a brand new set of Via Ferrata routes! Via Ferrata is Italian for “Iron Way”. Via Ferrata offer a more protected and less technical version of rock climbing and scrambling. Modern protected climbing routes began appearing in the Alps in the mid-1800s. During WWI, Italian and Austro-Hungarian troops made use of such routes along the mountainous fronts of the Dolomites.

The Ouray routes lie just above the town along Camp Bird Road. You park at the first big hairpin turn, then walk uphill to a bridge over the Uncompahgre River. A short hike up the western side of the canyon brings you to the start. A ranger stationed at the start onboards you to the routes.

Via Ferrata make use of a continuous steel cable anchored into the rock. A VF “kit” includes a lanyard that attaches to your climbing harness. The lanyard has two offshoots ending in carabiners with spring-loaded hinges. At any point in time, you’ll have at least one carabiner clipped into the steel cable. The pair allows you to switch from one cable section to the next without being fully “unclipped” at any time.

While this sounds relatively safe, falling on a Via Ferrata can present a real danger. A vertical cable section can feature perhaps 10+ feet of cable before the next bolt. That’s a long way for you to slide! Such “class 2” falls can cause serious damage without some “shock absorption”. For this reason, a proper VF lanyard features a section of loosely stitched lanyard designed to unravel during a hard fall. In essence, the exploding stitching absorbs the energy so your spinal cord does not.

Beyond the lanyard, you’ll need a helmet and harness. All three pieces of equipment are available for rent in town (e.g. here). Other recommended gear includes good footwear—sneakers or “approach shoes” work best.

At the trailhead, I met another solo adventurer. Like me, she was in town for both the via ferrata and some peak bagging. We decided to tackle the downstream route first. There are two routes at present (upstream and downstream). The original downstream route runs longer (for now) and deposits you back at the roadway where you park. Doing the upstream route first thus proves more efficient, but we wanted to get this more popular route done early before other folks started to arrive.

The route starts by crossing the Uncompahgre River on a dramatic tri-cable bridge. From there, it snakes up and down the cliff faces towards the roadway below. A pair of early exit points allow you to cut short the vertigo-inducing adventure.

Towards the end of the route, you get to choose from two grand finales:

Halfway along the downstream route, we met up with a third solo adventurer. The three of us walked back up to the trailhead, to try out the upstream route. This newer route was notably shorter than the original adventure, for now. We learned from the ranger that the volunteer crews were working to expand it further upstream.

While shorter (for now), this new route was certainly flashier! The route begins with a tri-cable bridge high above the river. From there it ascends further via a hair-raising cable ladder.

The upstream route felt a bit more challenging to me. Negotiating it required more reliance on the cable itself. Then again, it also represented our second challenge for the day. And the sun was climbing higher.

But before long we descended the cliff face towards a final crossing of the river. Our adventure on the iron paths drew to a close.

The Ouray Via Ferrata remains somewhat unique in the United States. Not only are VF rare on this side of the Atlantic. But the few high-quality routes tend to be expensive to access. A few premier ski areas operate some of the best in the country (e.g. Arapaho Basin, Jackson Hole). And they often require pricey guided adventures.

Oddly enough, another free VF of popular renown sits down the road in Telluride. (While Telluride lies 10 miles from Ouray as the crow flies, the drive between them takes over an hour—in good weather!). That said, the Telluride VF is arguably of much lower quality. The cable route itself is quite short, and the approach involves some infamously exposed, loose rock sections, devoid of protection.

So, as of this writing, the Ouray Via Ferrata remains somewhat unique. It’s a safe, high-quality pair of VF routes, along a gorgeous box canyon. The routes are free and open to the public. And you can cheaply rent the proper gear right in town.