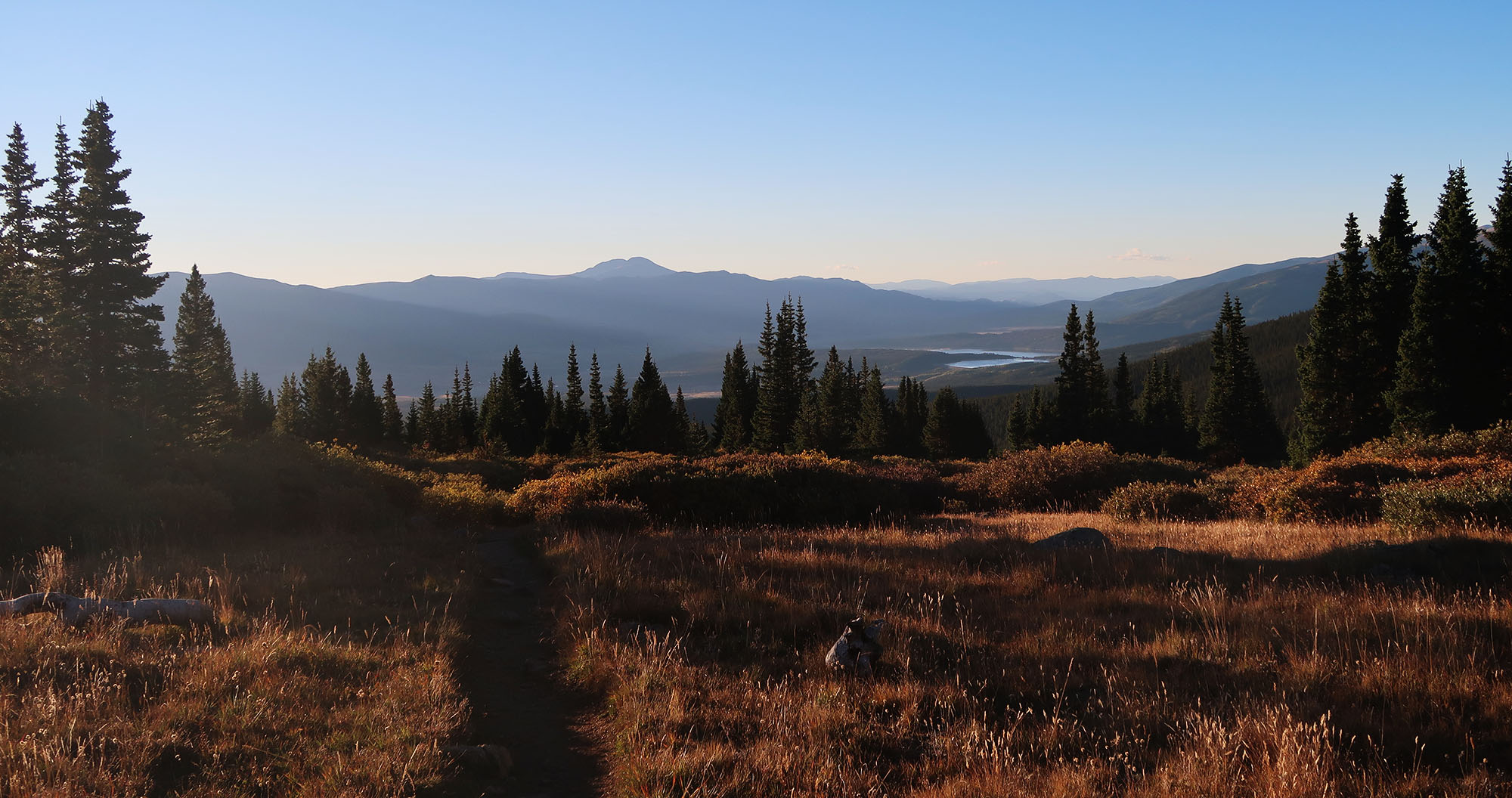 Around 5 am I drove up past the Elbert Creek campground towards the trailhead. Across the street, I saw a veritable rave of flashing headlamps and brake lights at one of several Mt Elbert trailheads. But I pulled into the massive lot to find only a couple of other cars and no bustle.

Such is life in second place. But more on that later.

Three popular routes lead to the summit of Mount Massive. All of them rank as Class 2 trails, meaning you’ll encounter some boulder hopping but no full-on scrambling. Many folks prefer the Southwest Slopes, which cuts the mileage to the summit in half. But that route requires some 4WD driving shenanigans.

So I opted for the East Slope approach, aka the standard route. At 14 miles round trip, it’s a bit of a slog for sure. And at 4,500 vertical feet, the ascent definitely takes a solid effort. Massive is … well … massive.

In short order, I began my ascent up the lowermost southern slopes and away from the campsites. The first few miles take place along the epic Colorado Trail. This long-distance backpacking route runs nearly 500 miles from the front range, west of Denver, to Durango in far southwest Colorado. In the Sawatch Range, where Mount Massive lies, the trail bumbles along below treeline, beneath many of the state’s tallest peaks.

A bit before dawn, I arrived at the turnoff for Mount Massive. The Colorado Trail had spoiled me with a couple of miles of roughly flat terrain. I would, of course, pay for this later in the day. But now the ascent began in earnest. I powered up through the woods, towards treeline art 12,000 feet. I had timed things well, with sunrise occurring just as I broke above the pines.

Massive lords over the town of Leadville, and the uppermost portion of the Arkansas River Valley. In turn, I would be treated to commanding views of the town and several lakes on my ascent.

And from the moment I left the woods, Mount Massive’s hulking, broad summit ridge became fully apparent. I would stare at it, annoyed, for the next few hours!

Not quite the tallest

Mount Massive truly is a massive, hulking beast of a mountain. It sits in the northern Sawatch Range, home to many of the tallest peaks in Colorado and the contiguous US. But just next door, to the south, lies Mount Elbert. And Elbert rises a mere 12 feet above Massive. And so Elbert ranks as the tallest peak in both Colorado and the Rocky Mountains.

Three Sawatch summits rise above 14,400 feet: Elbert, Massive, and Harvard. All three fall a mere 100 vertical feet short of California’s Mount Whitney. Whitney ranks as the tallest in the contiguous US. And hot on their heels, at 14,417′ is Washington’s Mount Rainier. That three states feature 14ers within striking distance of each other in height may be either a grand coincidence or a vaguely coherent aspect of glaciation.

Apparently both Massive and Elbert had their “tallest in the state” supporters. For most of the 19th century, surveying techniques really couldn’t distinguish which was taller. For that matter, whether Elbert, Massive, Rainier, or Whitney was the “tallest peak in the United States” remained a matter of ongoing debate. Annexing Alaska obviously rendered the discussion moot.

As the story goes, supporters of Mount Massive were quite upset when conclusive proof showed it to be 12 feet shorter. So they built a giant cairn on the summit. Elbert partisans destroyed the cairn. This went back and forth until the US Geological survey clarified that such man-made structures wouldn’t count towards the peak’s height.

Thoughts of local pride and surveying snafus did little to break up the monotony of ascending this big pile of rocks. I personally find both Elbert and Massive to be rather boring summits. Don’t get me wrong, a day out hiking a 14er will always feature epic views and a proper cardiovascular challenge. But these two peaks just strike me as rather … featureless?

That said, the ascent does treat you to some excellent, far-off views of some of Colorado’s most charismatic peaks: the Elk Mountains. In particular, a recent dusting of snow accentuated the rugged slopes of the Maroon Bells and the near-permanent snowfield of Snowmass.

Soon enough, I popped over the final “false summit” and stepped over a small patch of September snow toward the true summit. On a crystal clear day with minimal wind, I could sit with some fellow hikers, soaking in the sunshine. Several of them had come up the shorter Southwest Ridge route. I was a bit envious of their quicker descent.

After some snacks and water, I donned my pack and began the 7-mile trek back to the trailhead. It would take a couple of hours to descend the gentle slopes and then bumble along the Colorado Trail below the treeline. But sunshine and crisp fall weather were on my side.