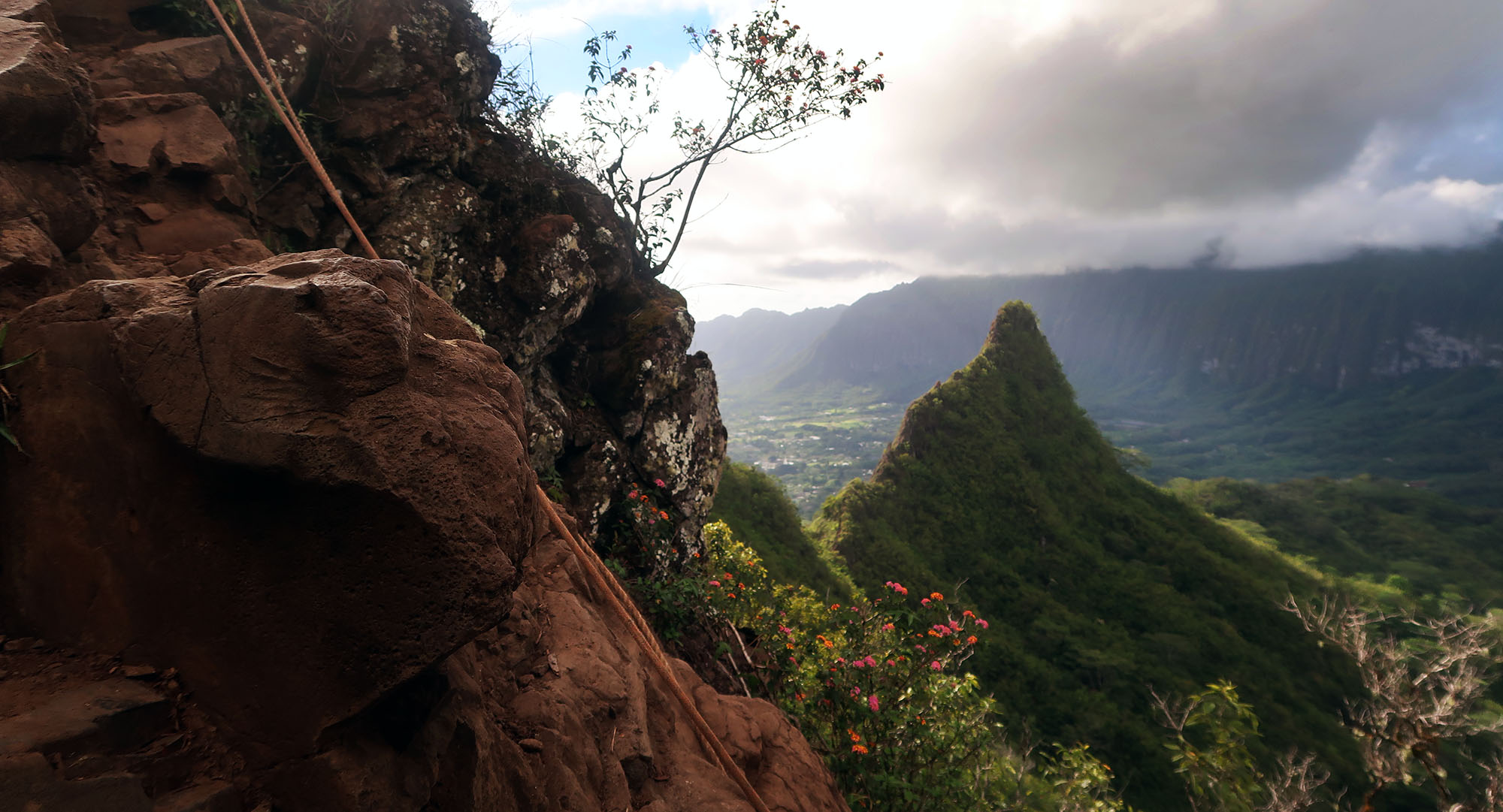 Nothing about Olomana Ridge seems smart, straightforward, or comfortable. This even starts with parking. After arriving at the alleged “trailhead” I drove back out towards a nearby bus stop where I found some parked cars along the side of the road. I decided this looked legal enough and headed back towards the “trail”.

You won’t find any formal signs for the trail. You will find plenty of “prviate property” and “no parking” signs. For nearly a mile, you walk along a private driveway, towards a golf course, with “no parking” signs affixed to every lamppost.

I followed the trickle of other hikers down the road. A semi-legit-looking sign announced where the true trail began. In true Hawaiian fashion, stickers coated every inch of the sign. Then the mud began.

The ascent begins immediately after leaving the pavement. It starts moderately steep, along muddy, washed-out single-track. Thick tropical forest blocks your views as you slowly ascend up towards the first peak. But roughly a third of the way up, you begin getting glances of the broader valley and ocean.

The trail briefly passes through a lovely evergreen grove, before resuming its steep ascent through jungle. This is when the hike turns into a scramble, and your hands come into play. Steep rocky ledges lead up towards the peak.

Trust a rope you didn’t place?

I’ve done my fair share of hiking, scrambling, and rock climbing. In my not-very-expert-at-all opinion, Olomana Ridge pushes dangerously into the third category. The route to the first (and tallest) peak remains mostly in the “scramble” category. And on my way up, I made it a point not to make use of any of the fixed ropes along the way.

But if you continue on to the second and third peaks, and perhaps even on descent of the first, using the ropes seems unavoidable. And that’s kind of a big gamble. Because who knows how long each of the ropes has been on the ridge. How much weather has that sling had to endure? How many climbers have arrested a fall by yanking on that rope with about 1.5 times their body weight of force? Who placed the gear? How healthy is that tree limb it’s attached to?

I have no answers. Only questions.

At any rate, I (along with dozens of other hikers that day) made it safely up the scrambles towards the first, tallest summit. And the views were really starting to open up!

According to Hawaiian legend, Olomana was a giant warrior who lorded over the windward side of Oahu. A brave human split him apart, with the sharp mountain ridge representing one-half of his remains. The exquisitely cuspy ridgeline consists of three jagged peaks. The whole formation sits within a valley isolated from Honolulu by much taller peaks further inland.

Olomana Ridge ranks among Oahu’s most recommended. hikes. But the route is quite technical. Hiking to the first (and tallest) peak requires hands-on scrambling and trusting the aforementioned fixed ropes. From there, the route becomes a bit more like vertical climbing. Within the past decade, there have been at least four fatalities and numerous rescues.

I reached the first peak, with panoramic views of the ocean, valley, and Oahu’s central ridgeline. Now came a decision: turn around or continue to peaks two and three. I decided to push it a bit further.

The journey from peak one to two was a bit more rugged but nothing game-changing. Heading up peak two, I started to rely a bit more on the ropes.

Atop the second peak, I again decided to see how things progressed. Almost immediately, the descent towards the third peak turned near-vertical. I had a choice between rock climbing without any protection or using the rope to walk down the rock backwards. I came very close to turning around. Then I saw another guy successfully walk down the steepest part.

So I put my life on the fixed sling. A lot of climbing accidents come from fixed equipment failing after a few years. This wasn’t a very smart decision. But like many bad decisions, it rarely ends with a problem.

Next, I continued up the third peak. This wasn’t any worse than the downclimb. I made it roughly halfway up when it started to rain. That’s when I started to think about doing this whole shebang backwards. Wet. Yikes.

So I called it there, and missed out on summiting the third peak. If I had continued, there was a 99% chance it would have been fine. But there would be hundreds of similar hikes in my future. Why risk it?

I saw only a handful of hikers on the ridgeline. But from the main summit down, I saw several larger groups. This was definitely a popular hike. And for good reason. Olomana Ridge presents a beautiful adventure on Oahu, with a dash of andrenaline. Perhaps not entirely safe. Perhaps not entirely legal. But a ton of fun nonetheless.