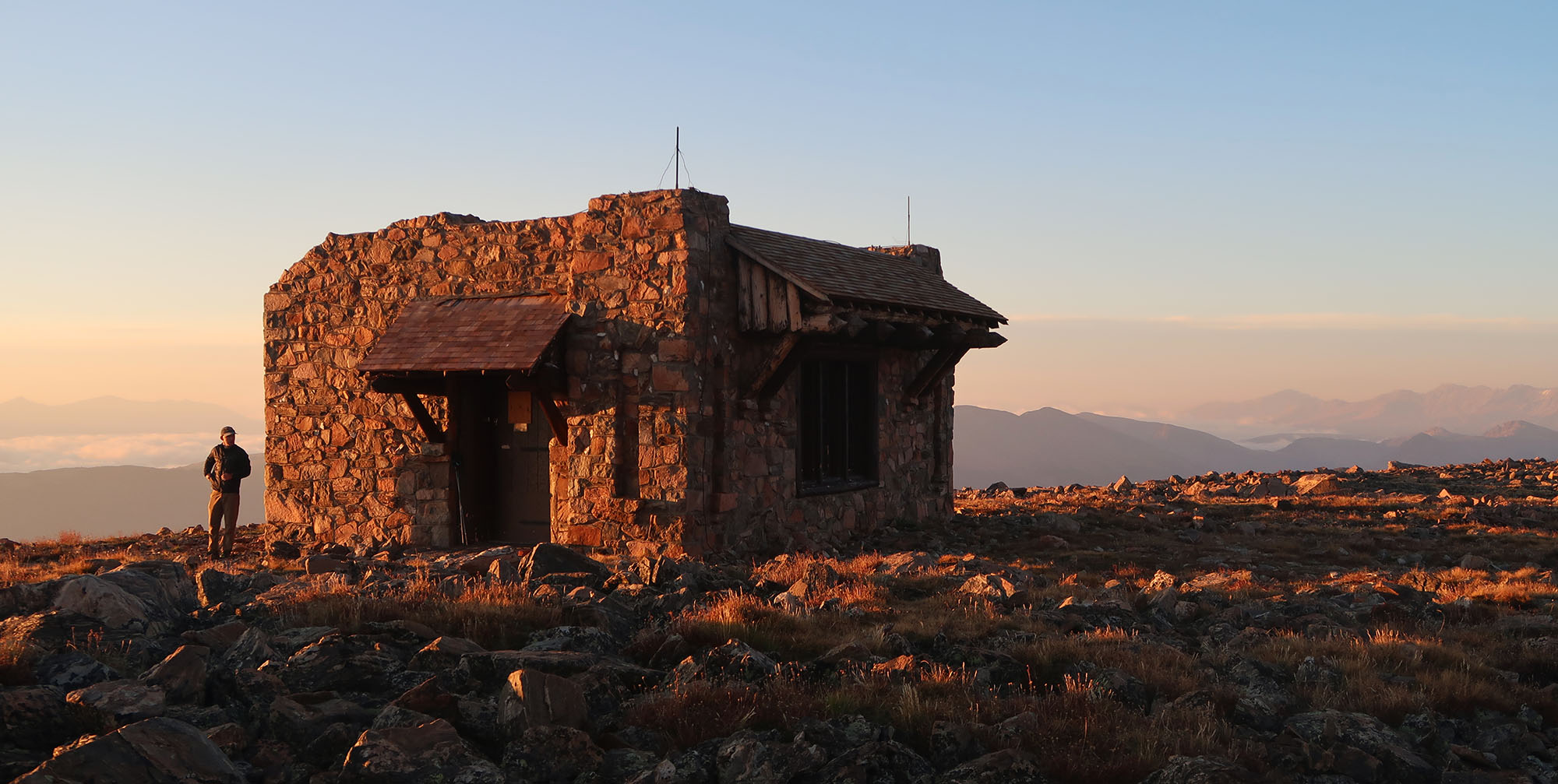 Around 3:15 am I drove through Minturn, past empty streets and darkened windows. Then, I began the long winding dirt road up towards the Halfmoon Campground. The sun wouldn’t make an appearance for another three hours at least. But even still, I arrived at a bustling trailhead filled with headlamp beams and dimly lit truckbeds.

By 4 am, I had started off along the Fall Creek Trail. The broad, well-worn path made its way through pine forests and up the steep, lower slopes of Notch Mountain. As it passed through open meadows I stopped to marvel at the clear skies above, full of stars. I saw my breath in the headlamp beam: it was definitely Fall in the Rockies.

I was well above treeline, pushing towards 13,000 feet when the sun finally crept above the horizon. All this was by design. I wanted to see sunrise on the eastern slopes of the Mount of the Holy Cross, my target for the day.

No matter how you slice it, hiking Mount of the Holy Cross makes for a big day. Even by fourteener standards. You’ll cover more than 5000 feet of elevation gain, over at least 14 miles. Many folks choose to camp out in the valley beneath the peak. In my view this doesn’t make things easier per se, just different.

Instead, I opted to make the trek a continuous circuit. I would ascend not the standard route, but rather the “Halo Ridge” approach. This would make the hike a loop, devoid of any repetitive out-and-backs. It would also take me over the historic pilgrims route, on Notch Mountain.

And so, just minutes after sunrise, I arrived at the Notch Mountain Shelter. The civilian conservation core built the beautiful stone hut in 1933, during the depths of the Great Depression. It sits near the summit of Notch Mountain, with a commanding view of the nearby fourteener.

I had arrived just in time to see the full, frontal face of Holy Cross bathed in golden morning light. Despite not an ounce of snow left on its slopes, I could make out faint outlines of its famous ‘cross couloir’.

The Mount of the Holy Cross

Despite an entire mountain range named “blood of christ“, Colorado’s tallest peaks don’t usually carry religious names. But for Mount of the Holy Cross, the name was likely inevitable. Photographer William Henry Jackson captured a picture of its striking “cross couloir” in the late 1800s. A couloir (French for ‘corridor’) is a narrow gully filled with snow between rocky ridges on a mountain.

For a while after, a few enterprising Christians promoted the mountain as a sort of pilgrimage destination. Visitors would ascend notch mountain, via the trail I had just taken. They could then gaze upon the cross couloir. This was remote tourism for Eagle County Colorado decades before interstate 70 or Vail ski area came into existence.

Holy Cross gained and lost national monument status. Its popularity among Christian pilgrims waned. And today the mountain has sunk back into relative obscurity. Not helping matters, recent photographs suggest the cross couloir no longer cleanly resembles the symbol of christianity.

I stood there at 13,000′, within shouting distance of the summit. A small basin, perhaps a mile wide, stood between me and the peak. At its base, 2000 vertical feet below the summit, was a small alpine lake. Continuing the religious theme, it’s called the Bowl of Tears.

But despite being so close, I knew I stood a couple of hours from the summit. After the Notch Mountain Shelter, the formal trail ends. Instead, I would traverse around the bowl of tears along “Halo Ridge”. The relatively gentle traverse features a half dozen ups and downs. I would travel along talus fields. Occasionally, I would get lucky and pass along grassy, flat slopes. But for the most part, it was a lot of rock hopping.

The last, somewhat prominent peak along this ridge stands as a “Centennial 13er” in its own right. That means it ranks among the 100 tallest peaks in the state with at least 300 feet of prominence. I sat atop this peak for a while, regaining strength and enjoying a snack.

From this subpeak, my path turned north to the Mount of the Holy Cross. But heading south, I saw hikers bagging other, lower peaks along the ridge system. These peaks comprise the northernmost major summits of Colorado’s mighty Sawatch Range.

Summiting Mount of the Holy Cross

Finally, after much huffing and puffing, I summited. I chose a warm, bluebird day with low winds for this high-commitment ridge traverse. But despite this, smokey haze from wildfires in Oregon and California obscured the farther-reaching views. Atop the Mount of the Holy Cross, you get an incredible birds-eye view of Vail’s famous Back Bowls. This makes sense since skiing these bowls, you get excellent views of Holy Cross. Symmetry!

A warm September Saturday presents perhaps the easiest time to tackle Mount of the Holy Cross. But plenty of folks summit year round. In fact, the cross couloir ranks among the “fifty classic ski descents” in North America.

We hikers may not bear a literal cross on our journey over this peak. But this epic day hike still feels a bit like martyrdom. From the summit, I descended the standard route down towards the backcountry campsites near East Cross Creek.

These campsites sit at roughly the same altitude as the trailhead. But the route back would involve a 1000-vertical foot ascent and descent over Halfmoon Pass. This massive “pointless up-and-down” or PUD has come to define the Holy Cross ascent.

I paused at the creek to filter more water. I had spent all day mentally preparing myself for this ascent. I hate climbing uphill at lower altitudes in the heat of the day. But the gentle switchbacks and well-maintained route proved benign. Before long, I stood atop a breezy Half Moon Pass. From here it was all downhill!

Despite being a prime, sunny weekend in early September, I saw few other hikers that day. Along Halo Ridge, I “leapfrogged” a part of four friends over most of the route. I saw just one other hiker (traveling the opposite way). On the standard route, I passed by perhaps 30 fellow hikers in total. The big day keeps the crowds down on this one. Overall, I had a wonderful time in the Holy Cross Wilderness.