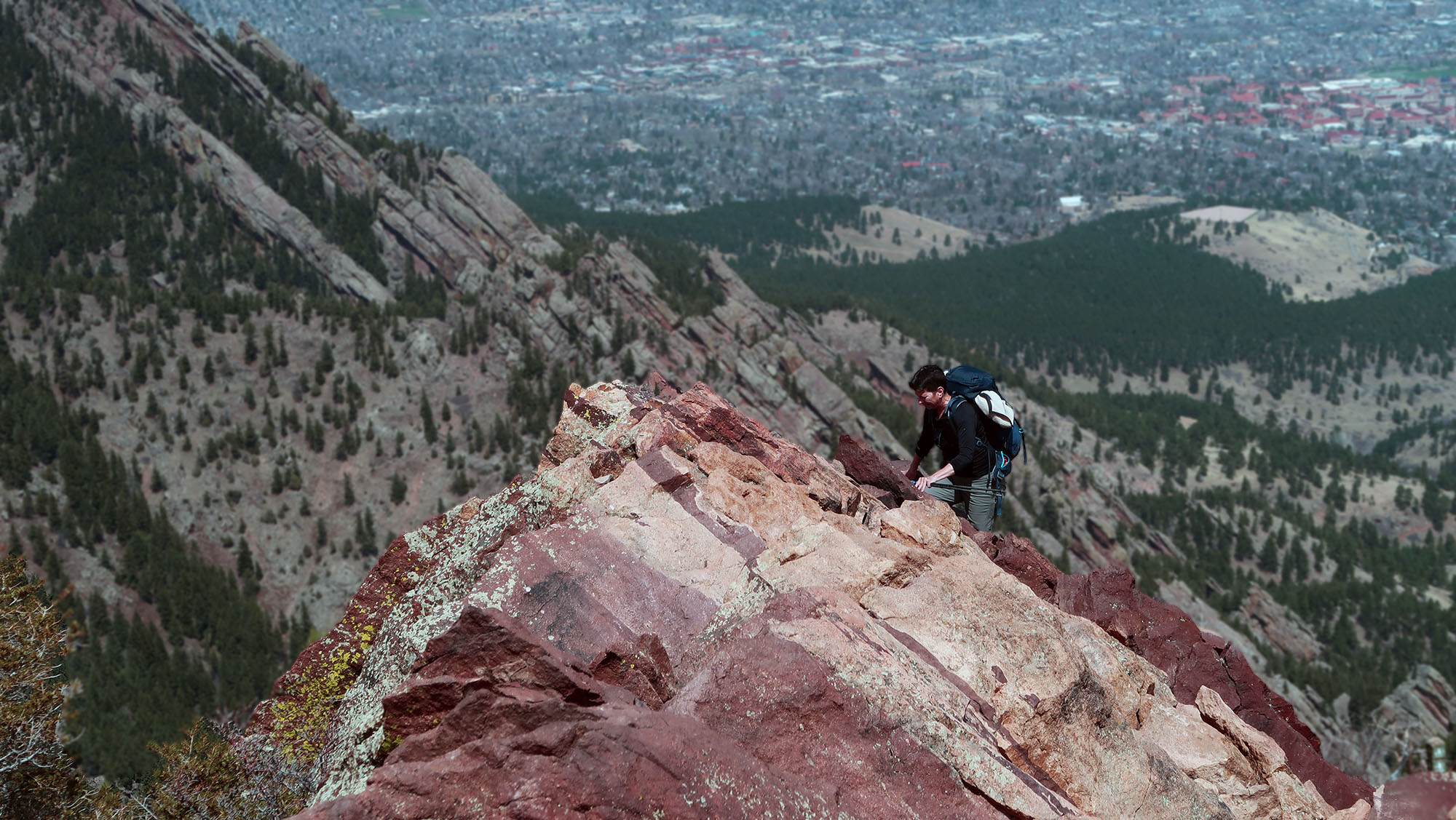 My day began with a morning rush hour drive along US-36 from Denver towards Boulder. Traffic moved thick but fast. I pulled off onto CO-170 and suddenly found myself deposited onto rolling ranch land, dotted with deciduous tree stands and farmhouses. Just beyond this bucolic scene, the Flat Irons and foothills loomed large, aglow in the morning light.

Soon enough, I arrived at the South Mesa Trailhead, one of many portals into Boulder’s vast Open Space and Mountain Parks. I spotted my friend, finishing up gear prep alongside her car. The parking fee situation seemed at first ambiguous. The trailhead often requires a $5 fee, but prior to Memorial Day, this fee gets waived.

After sorting through this, we set off. The South Mesa Trail took us over South Boulder Creek and up the gentle slopes towards the foothills. Our journey began at the extreme western end of the high plains. To our East, the nearest mountains lay over a thousand miles East among the Appalachians. But to our West, South Boulder Peak’s summit stood just over two miles away.

Very quickly we forked left onto the Homestead Trail. This route gently rose 500 vertical feet over the next mile, towards the base of the mountains. We passed numerous folks walking dogs and jogging along the broad, gently sloping dirt path. The route passed in and out of small, piney tree stands.

After a brief stint back on the Mesa Trail, we headed up the Shadow Canyon Trail. By the time we approached the steep, narrow canyon, we had gained a respectable 700′ from the trailhead.

Then the ascent began in earnest. The “canyon” is more of a gulch or ravine, formed between both South Boulder and Bear Peaks. And its eponymous trail rises nearly 1800 vertical feet in just over a mile through this gulch. We ambled over small boulders and ledges under thick tree cover. The “Devil’s Thumb,” a prominent rock outcropping, came in and out of view through the trees.

At long last, 3.8 miles and 2600′ from our starting point, we reached the col between the two peaks. Recent wildfires had left the broad saddle area between South Boulder and Bear Peaks feeling open if a bit forlorne. Bare, pale trunks of dead trees dotted the upper slopes of our target.

We pushed up the final 300 vertical along the short spur to South Boulder’s summit. Of the six major peaks near Boulder, South Boulder Peak ranks the tallest. That said, it tends to hide behind lesser summits, out of sight from many vantage points in Boulder.

April can prove touch-and-go in terms of snowpack in the foothills. Until the col, our route remained snow-free. But these uppermost switchbacks sported some consistent snowpack. We slid and stumbled a bit, loathe to break out (and sully) our microspikes. As any spring skier knows, compaction tends to preserve snowpack. So ironically, the trail itself is often the last place to fully melt out.

At long last, we reached the summit. To the East we enjoyed commanding views of the high plains, above which we had steadly climbed. South Boulder’s 8,524′ summit might seem stubby by Colorado standards. But there were no mountains due East of us that rise taller. (At least not until Europe or Africa).

And to the west, we saw the snow-capped summits of the Great Divide. Numerous 13er peaks formed a barrier on our Western horizon. In front of them we saw the slopes of Eldora ski resort.

Much closer at hand, we also saw the rocky ridgeline of adjacent Bear Peak. A pair of tiny hikers marched along its ramparts, silhouetted against the sky.

We carefully descended along the snowy switchbacks back to the col. Then we pressed onwards and back up towards Bear Peak. The trail dripped off the high ridgeline towards the West. Below us we saw the rolling, forested hills of Walker Ranch.

After a short, surprisingly involved scramble we reached the summit. In most directions, the view proved similar to South Boulder. But Bear Peak also featured sweeping views of the City of Boulder and nearby Green Mountian.

Descent towards the Nebel Horn

From Bear Peak we descended towards the north. Our intent was to turn this hike into a nice loop. We dropped 1000 vertical feet along the ridgeline towards a minor summit known as the Nebel Horn. Ample rocky crags gave its summit a lot of fun character. That said it was closed for raptor breeding until August.

From the Nebel Horn, we descended off the ridgline and into another gulch, dubbed Fern Canyon. After a steep, somewhat scrambly descent, we arrived back in mesa territory. The South Mesa trail took us back towards the trailhead, along open grassy plains and tall stands of evergreens.

The whole affair took the better part of a day. The loop clocked in at roughly 9 miles and 3.5K of gross vertical gain. This was my first major hike since November, and I was certainly feeling the burn! But the sweeping views and varied terrain made it well worth a couple naproxen.