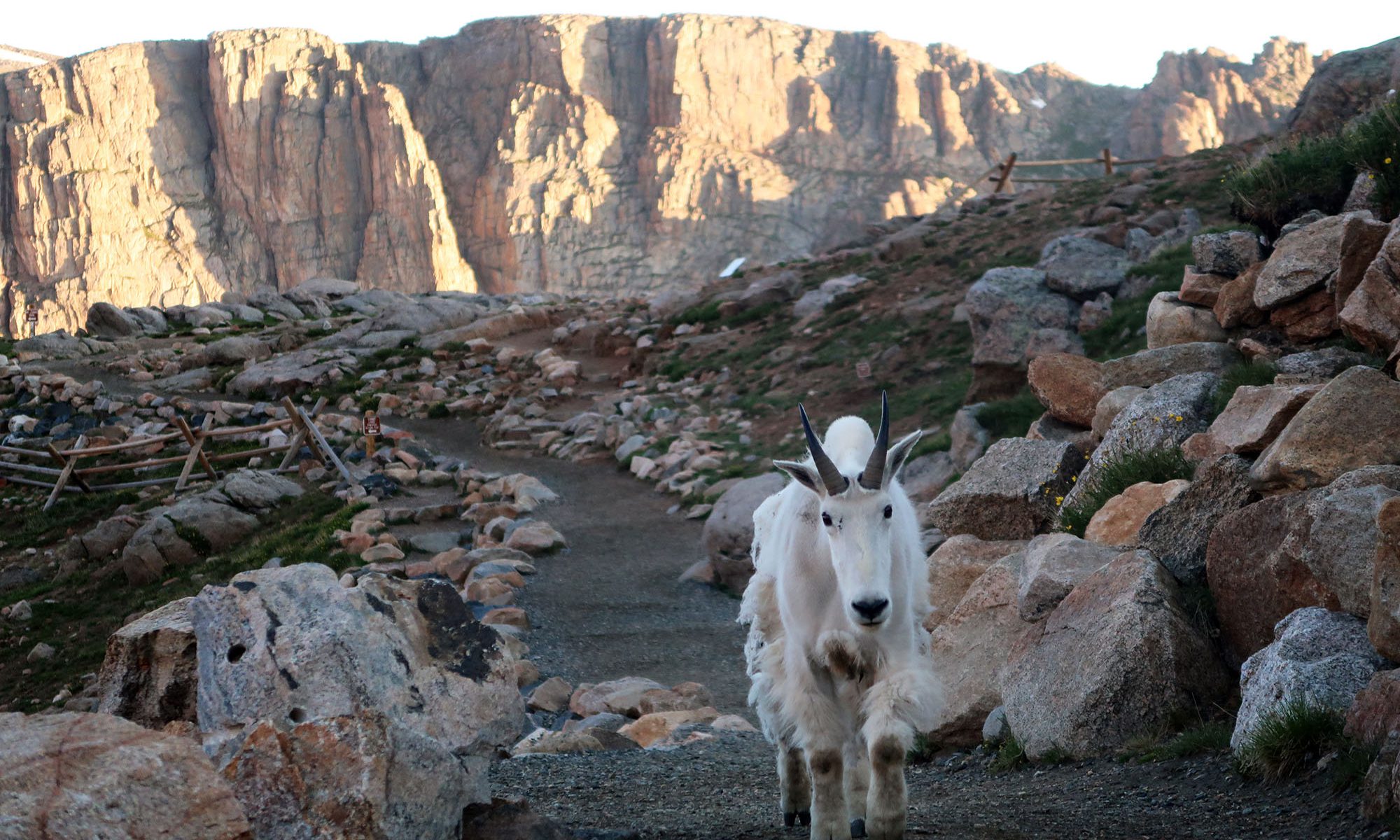 I pulled into the half-full lot at Summit Lake just before sunrise. The forecast called for a warm, cloudless, summer day. After a string of ambitious (and at times failed) fourteener attempts, I was excited for an easy win.

Summit Lake sits at roughly 12,800′ altitude, making this perhaps the highest paved trailhead for any Colorado 14er. I say “perhaps” because Mount Evans presents something of a philosophical puzzle for what counts as a “trailhead” and what counts as a “hike.” The Mount Evans auto road leads to just shy of 14,200’—quite nearly the summit! Does walking to the survey pin from the parking lot count as having “hiked a 14er”? Most reasonable people would say ‘no’. Then again, a lot of 14er purists seem to insist a proper 14er ascent requires at least 3000′ of vertical gain. This would seem to exclude both my summit lake ascent from counting, along with some other easier 14ers (e.g. Bierstadt from Guanella Pass).

At any rate, Summit Lake Park itself is a gorgeous spot to stop and enjoy in its own right. A lovely trail travels along the shores of its namesake tarn. You can soak in dramatic views to both the north and east. The park is, oddly enough, owned by the City of Denver: part of its impressive portfolio of owned recreation spaces in the front range, encompassing everything from protected forests to a major ski resort.

Sharing the trail with the locals

I set out along the trail. Almost immediately I encountered a fellow hiker headed in the opposite direction. We didn’t say anything as he passed, mostly since I presume he did not understand English (or any other human language).

I saw many members of a large herd of mountain goats on Mount Evans that day. These goats seemed entirely habituated with humans. A few even hung around near the restrooms on the summit. Their extreme familiarity made me a bit nervous. While none of the goats seemed aggressive towards humans, they were quick to butt each other.

In point of fact, mountain goats are not very closely related to any other “goat” as they do not belong to the capra genus. Mountain goats are also unique to the high mountains of western North America.

Evans’ starkest legacy involves the Sand Creek Massacre. The governor had encouraged friendly Indian tribes to present themselves for “amnesty” at white-run forts in the territory. On one occasion, white troops entered one of these encampments while a majority of the native men were off hunting. They massacred over 100 unarmed American Indians, mostly women, and children. This was considered a dick move, even by 1800s, frontier standards. And Evans was forced to resign.

The route from Summit Lake to Mount Evans presents a nice entry-level fourteener day hike. While you start just 1400′ shy of the summit, you ascend roughly 2000′ thanks to some ups and downs along the way. The trail rises a steep and steady 1000′ over its first mile. This ascent occurs on the far side of Summit Lake from the mountain’s apex. From there you skirt along the edge of a glacial cirque surrounding the lake towards the true summit.

The entire ascent lies well above the treeline, so bring plenty of sunscreen. You’re never especially far from a road or building. And while this meaningfully reduces some risks (e.g. lightning), you will nevertheless want to come prepared and recognize this is a high alpine environment.

I made quick work of the initial 1000′ ascent to the high ridgeline. The sun slowly climbed above neighboring peaks, bathing the whole scene in warm, golden light. I kept a quick pace to avoid the growing conga line of fellow hikers arriving after sunrise.

For purists looking for a longer and more arduous ascent to Mount Evans, there exists another well-marked trail through the Chicago Lakes basin. It syncs up with the Summit Lake route early on, as the two climb towards the high ridge.

Once on the ridge, the sightlines open up in many directions. Mount Evans itself remains fully in view nearly the whole time.

Once atop the cirque, the trail mellows out substantially. You steadily encircle the lake from high above, towards the true summit. There are some ups and downs along the way, but it’s smooth sailing.

Within a mile of the summit, you dip onto the far side of the ridgeline from the lake. Here the rocks grow bigger and the trail more scrambly. That said, this route is a low-level class 2 ascent with no exposure and just a smidge of hands-on action.

Eventually, the summit complex comes into full view. You see the large parking lot, which is slightly annoying. But also the observatory buildings, which are kinda cool.

The summit of Mount Evans hosts an observatory that played an interesting role in cosmic ray physics in the early 20th century. Subatomic particles (e.g. protons and electrons) are often accelerated to nearly the speed of light in various extreme events around the galaxy. Earth’s atmosphere and magnetic field largely shield us folks down near sea level from these cosmic rays. But atop high mountains, on airlanes, and (most extreme) in orbit, there is a much higher density of these extreme particles to study. I mention this mostly because my grad school research focused largely on cosmic rays. I thus feel slightly more connected to this peak.

Mount Evans also experiences a high flux of tourists! As one of just two fourteeners you can summit via a 2WD sedan, it can get crowded. I definitely recommend going early in the day. You get a gorgeous sunrise, and the goats are likely more active.

After some well-earned summit rest time, I began the descent. Of course, there were even more goats involved.