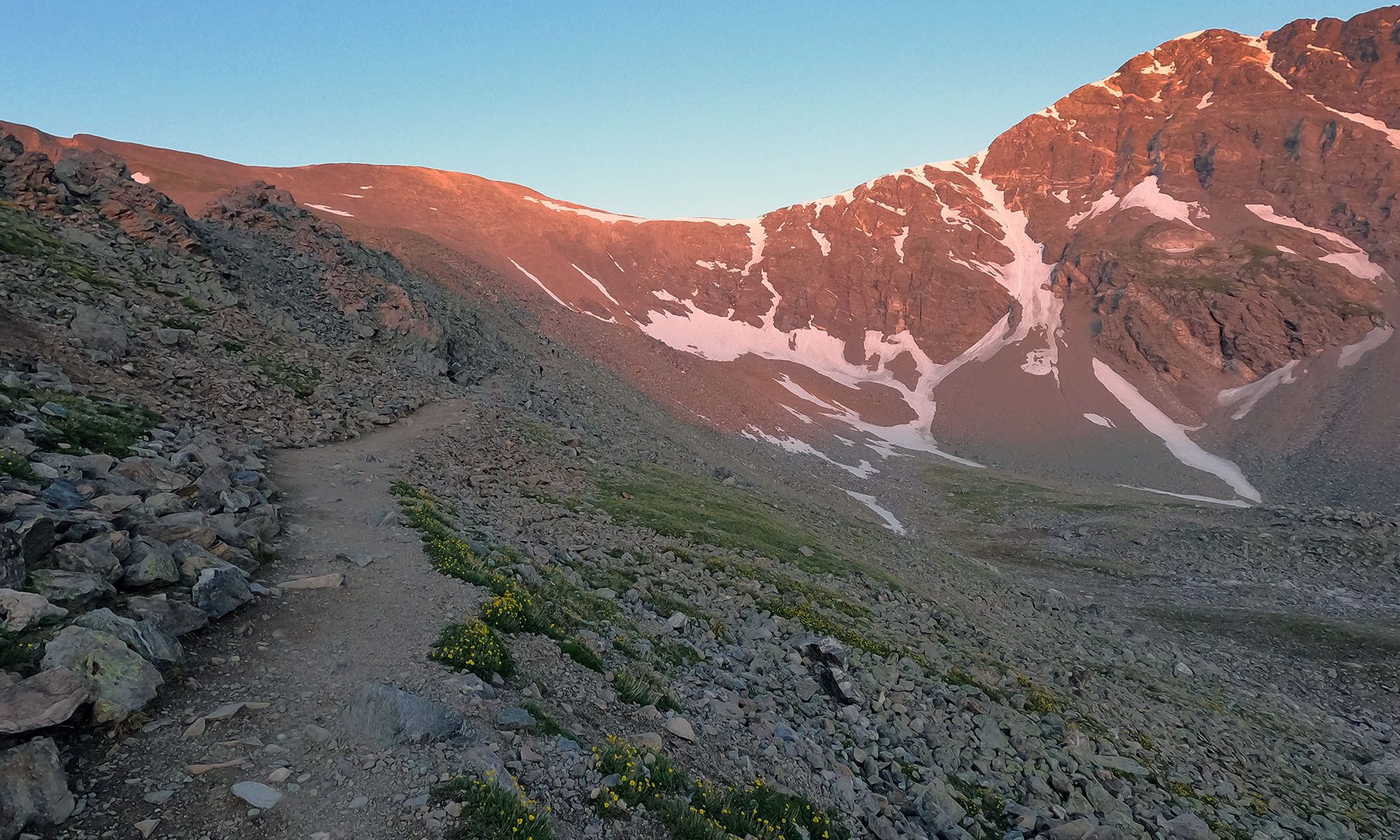 You can park safe and sound in a paved lot just off I-70 west of Silver Plume year-round. But in summer, if you value your knees more than your vehicle’s undercarriage, you can instead drive an additional 3 miles along a dirt road to the upper trailhead. When the road’s in excellent shape, they say any 2-wheel drive sedan can handle this approach.

Unfortunately, as of July 2021, the road was not in excellent shape. One short, steep pitch, in particular, featured deep scoops and ample loose dirt. I attempted a slow, steady ascent in my Subaru Outback twice. While I never scraped anything, I nevertheless lost traction, spinning uselessly in place. Only after observing some other folks ascend the pitch (straight on, with ample momentum) did I get it right on the third try.

Once I reached the upper lot, the next challenge began: finding legal-seeming parking. Clear Creek County has turned ticketing day hikers into a reliable revenue stream—though apparently one not reinvested into road improvements. Even at 4:30 am, under cover of darkness, the lot was abuzz with hikers. All obviously sanctioned spots seemed to be taken. I chose a parallel parking spot somewhat awkwardly close to the pit privies. It seemed legal enough.

Onward to the Great Divide

The hike begins just above 11,000 feet elevation, at the edge of tree line. The trail ascends 1400 at a steady, gentle pace over the first two miles. Being a peak summer Saturday, this section involved a somewhat continuous train of headlights.

The faintest hint of dawn’s light provided just enough definition to discern the jagged ridgelines rising high above the trail on either side. To the hiker’s right, I could see a somewhat sparser train of headlights along one of these high ridgelines. These were the folks tackling “Kelso Ridge”, a decidedly technical class 3 approach to Torreys.

Roughly 2.5 miles and 1600 vertical feet into my day, sunrise began. A combination of low angle light and ample wildfire smoke led to a beautiful, reddish sunrise.

The trail now switched to switchbacks, up the moderately steep gravel face of Grays Peak. Even in mid-July, these slopes featured occasional patches of the lingering snowpack.

Botanist Charles Parry made the first recorded ascent of Grays and Torreys Peaks in 1861. He named them in honor of two of his esteemed colleagues, Asa Gray and John Torrey. Definitely not the worst folks to name fourteeners after. For his part, Parry got a pretty sweet 13er elsewhere on the divide named in his honor.

Unlike many of the other B-list white male celebrities of the 19th century for whom 14ers are named after, both Gray and Torrey did eventually summit their namesake peaks. But these ascents occurred many years after Parry’s first recorded ascent.

Grays Peak stands slightly taller than Torreys, giving it the distinction of being the highest point on the North American Great Divide. While there are far taller peaks in North America (Denali, Pico de Orizaba), none of them sit on that magical line dividing Atlantic headwaters from Pacific.

The trail to Gray’s Peak follows gentle switchbacks all the way to the summit. This makes the route one of just a handful of “Class 1” ascents among Colorado 14ers. With its moderate vertical rise (~3000′) and proximity to Denver, Grays Peak is one of the most popular 14er hikes that cannot be completed via automobile.

With some huffing and puffing, I managed the ascent in decent time (roughly 1000 vertical feet per hour: my standard pace). Despite ample wildfire smoke from the Pacific states, the 360-degree front range views did not disappoint.

From the summit of Grays, I descended right along the continental divide. This traverse to Torreys is a “class 2” route, meaning surfaces are uneven and at times a bit more exposed. If you’re feeling OK atop Grays and have halfway decent balance, you’ll likely be fine on this route.

Ascending Torreys from the col between the two peaks adds just 500 vertical feet to the hike (in comparison, trailhead to Grays is 3000 vertical feet). And from Torreys, you can descend continuously to the trailhead via an alternate route. Towards the top of Torreys, I traveled along the remnants of a pretty sick winter cornice.

In short order, I made it to the summit. This was my first 14er “double header.” I felt rather accomplished this morning.

From there I began the long descent back to the trailhead. Atop Torreys I was joined by the daredevils who had ascended via Kelso Ridge. You could tell folks apart by whether or not they had climbing helmets. Perhaps at some point soon, having gained more comfort with exposed scrambling, I would try that route myself. Perhaps.