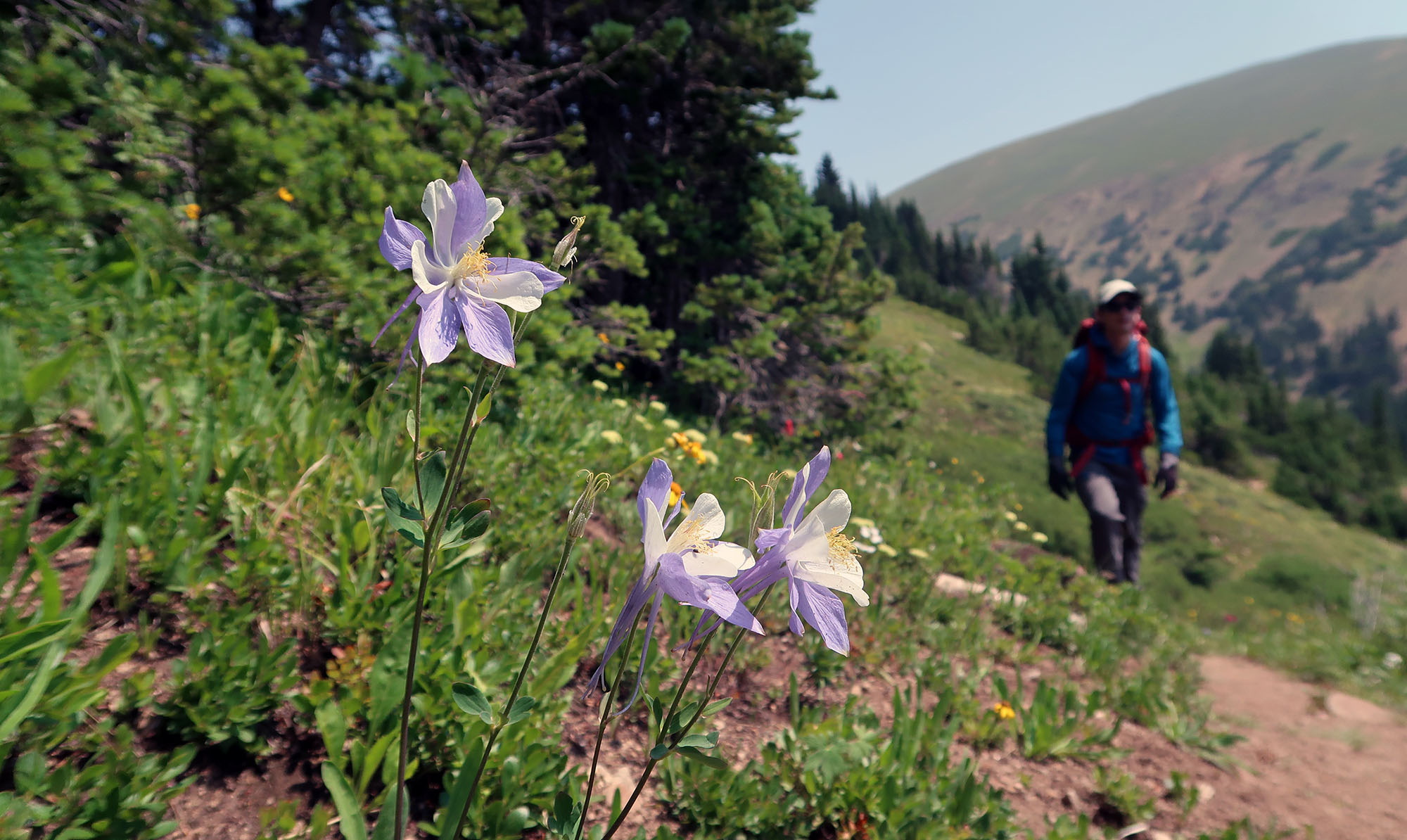 We arrived shortly before 5 am near the somewhat creepy Henderson Mine. To reach this hike’s trailhead, you leave I-70 along US-40 toward Berthoud Pass. At the first big hairpin turn, before US-40 begins to climb towards the pass, you turn off onto Henderson Mine Road. Two miles down this road, you reach the Jones Pass Trailhead.

Even in mid-July, this meant we’d arrived well before sunrise. We began our ascent under cover of darkness, though the trail was bathed in both moonlight and the incandescent glow from the nearby active mine.

The trail rose steadily over its first mile, up roughly 600 vertical feet towards where the many-mile “loop” portion of our hike began. Along these early switchbacks, we caught a birds-eye view of the Henderson Mine. Though we saw only a few cars in its large parking lots, the buildings were fully aglow with eery incandescent light. The high-pitched hum of its machinery permeated this lower portion of the Valley. Thick wildfire smoke endowed every light source, from the mine and the moon above, with a faint halo. The whole scene felt straight out of a Spielberg movie.

Just over one mile and 600 vertical feet into the hike, we reached the storied Continental Divide Trail. The CDT is a somewhat loose connection of trails along the great divide from the Mexican to Canadian Borders. Along with the Appalachian and Pacific Crest Trails, it forms the “triple crown” of long-distance hiking in the lower 48. Our loop over Vasquez and Stanley would involve traversing just a few easy miles of this route.

We chose to start by heading left (northwest) towards and beyond and Vasquez Peak. Vasquez was the more remote of the two peaks, so we wanted to cross it off first. The trail ascended at a much more gradual pace for this portion, climbing an additional 600 feet over 2.5 miles.

After traversing through a recent burn area, we pushed just beyond tree level. The views opened up, revealing rolling alpine meadows and boulder fields. Wildflower season had begun in earnest, and only small patches of snowpack remained on the ridgelines.

Soon enough, we arrived at the col on the far side of Vasquez Peak, where views opened up to the north and east into the Vasquez Peak Wilderness Area. The scene was downright gorgeous.

We left the CDT and began the steeper ascent to Vasquez Peak. Our traverse across Vasquez and Stanley now would largely involve “choose your own adventure” route-finding through rocky alpine meadows. While wisps of well-worn trail came in and out of focus, the route largely comprised of wherever we felt was safest to walk.

The ascent grew markedly steeper from the col. We rose roughly 1000 vertical feet, to just shy of 13,000′ in under a mile. The views in all directions grew more expansive but fogged up a bit by wildfire smoke.

Soon enough we summited Vasquez, our high point for the day. We continued along the ridge skirting the summits of a few minor subpeaks. This section lasted a lot longer than I had anticipated. But after 1.5 miles of this rolling ridgeline traverse, the trail dropped fast to the col.

We gave up over 1000 vertical feet in roughly 0.6 miles. The descent turned a bit scrambly at times but was always a class 2 experience without any crazy exposure. Eventually, we were at the col, dubbed Vasquez Pass.

I was nervous about our next ascent. The lower slopes of Stanley approached from Vasques Pass are quite steep. The trail proved easy to follow at first, just a standard dirt single track switchbacking up the grassy slope. But that slope was super steep! I think a fall in this area could easily have turned into an uncontrolled tumble.

We pressed forward in fits and starts. The total vertical gain that day would slightly exceed 4000 vertical feet, and we were on the worst of it.

I should take time to note: there’s a far easier approach to Stanley Mountain. From Berthoud Pass, you can ascend less than 1500′ to the summit. Much of this easier route takes place along a gently rolling path that passes a series of dramatic cirques. In fact, as we neared the summit we saw perhaps a dozen hikers taking this more popular route.

That said, our longer and more route-ambiguous circuit provided something rare in Colorado these days: serenity. Until the summit of Stanley, we crossed paths with maybe two other hikers (I don’t exactly recall if we saw anyone). Even the more popular approaches to Stanley seemed way, way less crowded than nearby marquee hikes (looking at you, Grays and Torreys).

After a moment to recuperate, we began the multi-mile descent along a well-marked trail back to the parking area. The late morning sun had really heated things up, and things turned a bit more sweaty and exhausting. But the sunny meadows were chock full of wildflowers, so the hike remained mostly enjoyable.