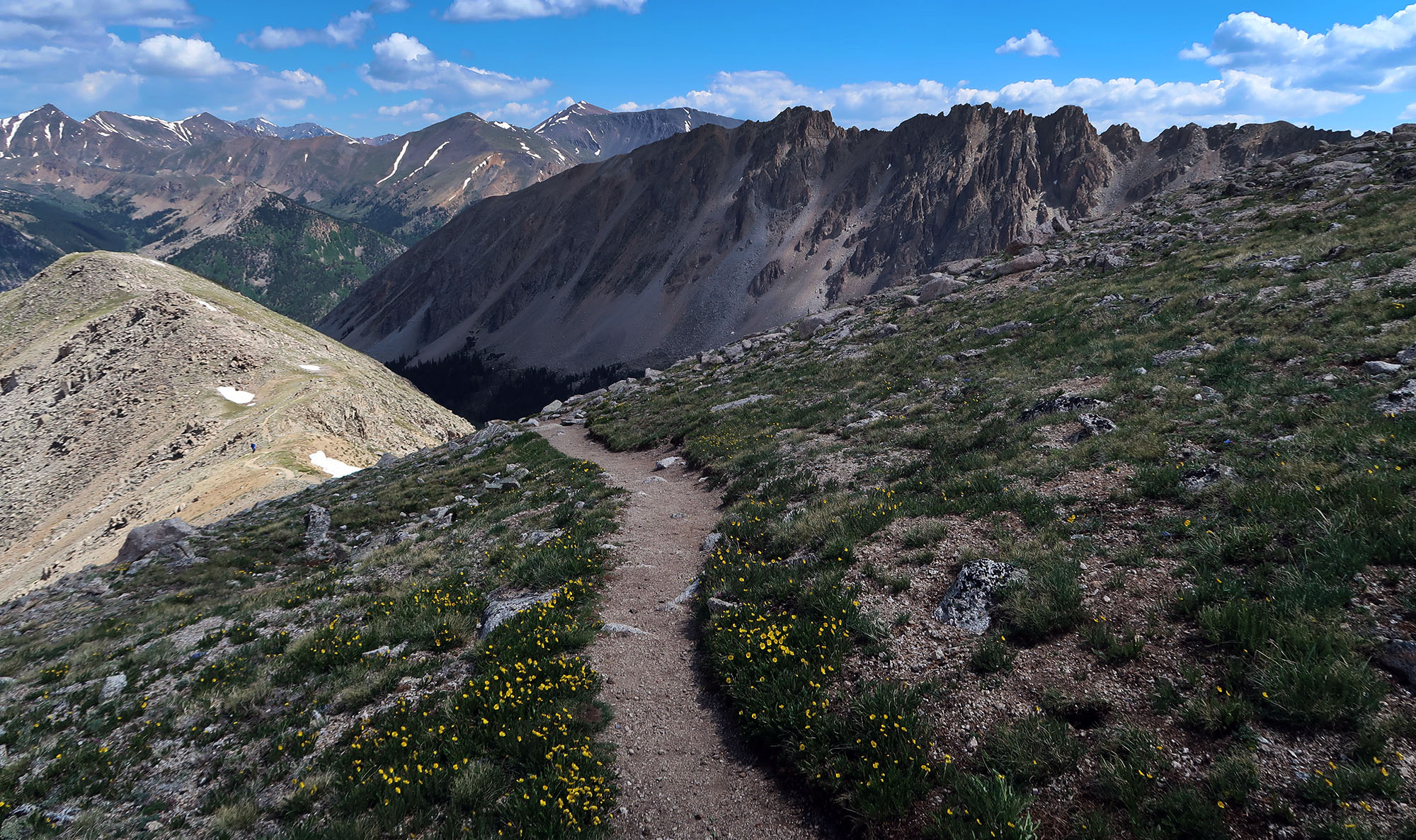 I left Aspen at 4 am for a winding, 1-hour drive over Independence Pass to La Plata. Deer swarmed the dark, winding roadway on either side of the pass, along with a few goats. I took care to avoid these furry car magnets. Eventually, I arrived at the paved trailhead for La Plata Peak.

When I arrived, the sun had already risen enough to produce a gentle glow on the horizon. My hike took place on one of the longest days of the year. The trailhead sat at 10,000′ above sea level, in a forested basin. A nearby creek gushed with ample spring snowmelt.

I began down the trail, which gently rises and falls over the first mile, in an effort to avoid private property. From there the ascent begins in earnest. The next mile rises roughly 1000 vertical feet into a narrow valley between La Plata and other nearby peaks.

La Plata is Spanish for … the Plata

La Plata is Spanish for “the silver,” undoubtedly a nod to the region’s rich mining history. Several silver mines existed in the environs. In fact, by the 1890s, nearby Aspen was processing roughly 1/6th of the United States’ silver (and 1/16th of the world’s), according to local historians.

Today those nearby mines are ghost towns. But the region remains alive and well thanks to amazing recreational opportunities.

La Plata Peak delivers a solid, beautiful day hike for any determined peak bagger. At roughly 4,300′ of vertical ascent, this is a solid step up from, say, Bierstadt or Quandary Peak. And its steep switchbacks and rocky ridgelines induce noticeably more vertigo than nearby Mt Elbert. But La Plata still remains a safe and solid mid-level class II ascent for anyone experienced with hiking in the Rockies.

Spring in the Rockies

They say “April showers bring May flowers.” But in the high Rocky Mountains of the Sawatch Range, ample snowmelt fuels gorgeous wildflowers throughout June and July. In this sense, La Plata did not disappoint! A diverse array of colorful blooms festooned the steep, grassy slopes from treeline to 13,000′.

This hike marked my first time above treeline in Colorado without snow on the ground. As such, I was blown away by all the flowers and lush green slopes. The trail wound its way up a very steep gully through this landscape.

This trail can definitely induce a bit of dizziness in anyone with a fear of heights or tumbling. That said, the path remains in great shape the whole way, and has seen ample, loving trail work to make it as safe as possible.

Towards the upper reaches of this ascent to the ridge, I got my first live glimpse of Colorado’s state flower: the columbine.

Along the High Ridge

At roughly 13,000′, or 3000 feet into your hike, the trail tops out on the high ridgeline towards the summit. From here, your final target comes into full view, along with sweeping vistas across the northern Sawatch.

The trail soon transitions from dirt path and grassy slopes to rocky scree field. The exact path becomes a bit harder to follow, with a few ‘braiding trails’ up the rocky incline. On my ascent, only one small portion of the trail involved walking on any remaining snowpack. That said, this stretch was a bit steep and slushy.

Soon enough I arrived at the summit. It blew my mind to consider how many different microclimates I had just traveled through, from lush forest to alpine meadow, to bare snow and rock. Even on a Sunday in June, the trail was not especially crowded. But there were a dozen or so folks on the summit that morning.

I saw for a while and enjoyed some snacks. Then it was time to do the whole thing in reverse. Such is the nature of mountain climbing.