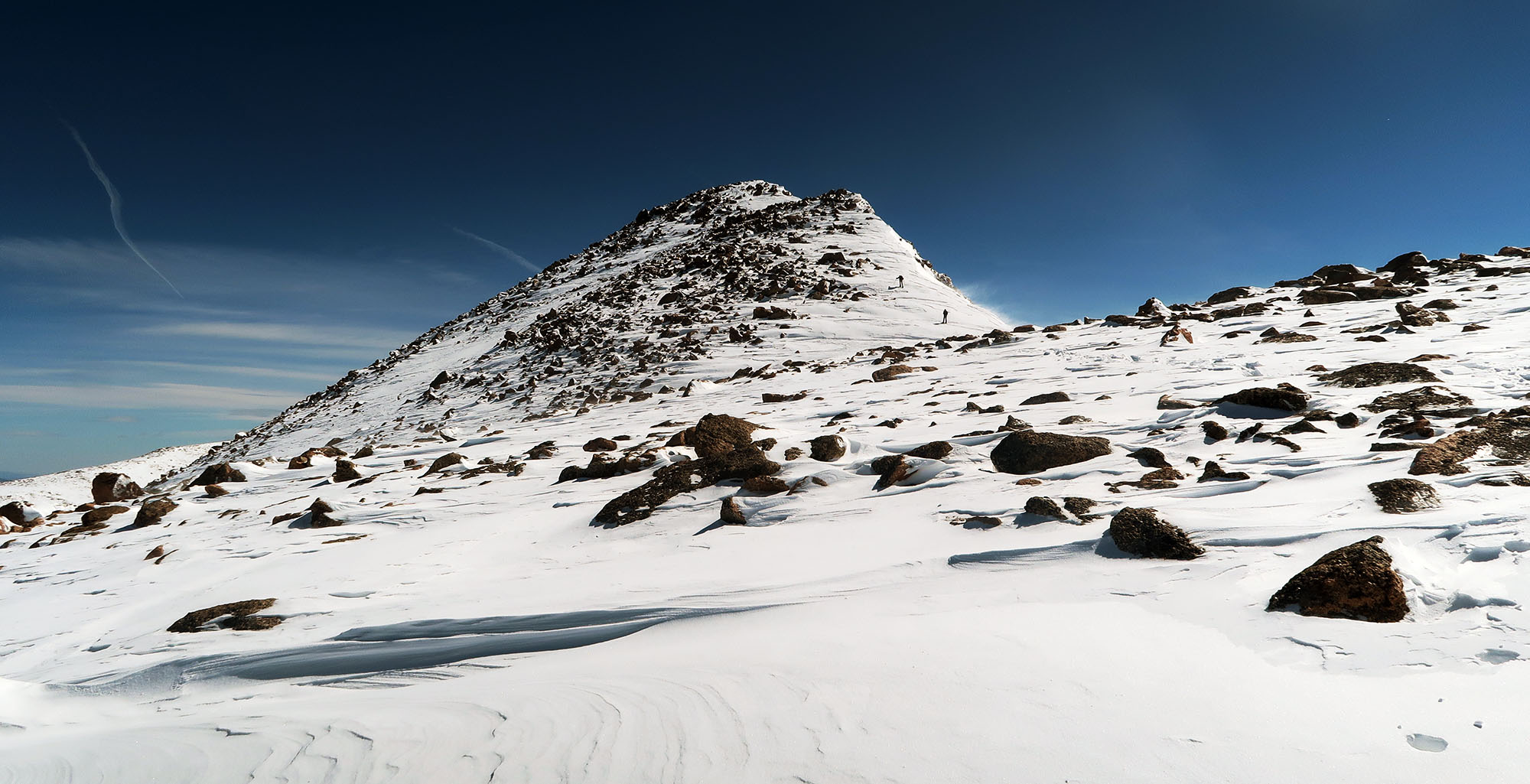 We arrived in the pre-dawn hours at Guanella Pass campground. Or more accurately, I arrived. My hiking buddy that day decided to camp out in his truck at 11,000′ on this cold, snowy spring morning. I tapped the frosted, translucent glass a couple of times to let him know I arrived. And a moment later, an incandescent glow filled the cab, letting me know he was in fact conscious.

We suited up, throw on our packs, and grabbed our snowshoes. The primary challenge on this Saturday in late April would be fresh snow—at times 12+ inches of it. After a sluggish start to the ski season, Colorado had been blessed with a snowy spring. And the Front Range in particular had received quite a bit of fresh snow over the past few weeks.

Our journey began with a road walk. Guanella Pass’s northern approach (from I-70 and Georgetown) only gets plowed to the campground parking lot at 10,800′. This adds roughly 2 miles and 800 vertical feet to the journey, since the summer trailhead starts at the pass, at 11,600′. The road was covered in perhaps 6″ of fresh snow. While my buddy resisted snowshoes for the first mile or two, I strapped them on from the parking lot. They wouldn’t come off until we reached the car park again, many hours later.

We reached the summer trailhead and began crossing through a large, open flat area between the roadway and Bierstadt’s upper slopes. At this point, we were the forerunners that day, “breaking trail” through fresh snow. Only a couple of inches coated some areas. that day. But wind-loading had built up over a foot of snow along other stretches of trail. So it was definitely slow going.

Bierstadt was only my second Colorado 14er attempt. The first was Quandary Peak, almost precisely a year earlier. The two routes featured nearly identical vertical rise, though Quandary was a shorter hike (with a more uniformly steep pitch). Like Quandary in Early May, Bierstadt in late April was fully buried in snowpack and very, very windy. But unlike that earlier hike, we had one more complication: a lot of fresh snow.

Around 13,000′ we grew sluggish and out of breath. I had spent all winter skiing and biking, but neither activity packs the sustained aerobic punch of powering up a 14er. We took it one cairn at a time. Just below the high ridgeline, we stopped for a proper break.

When you hike in winter conditions, proper insulation presents a big challenge. Too many layers on the ascent can lead to heavy sweating. And failing to bundle up when you stop can get super cold super fast. This may sound like a mere issue of comfort, but miles from a roadway and high on a mountain it rapidly becomes an issue of safety. In particular, I get freaked out any time my fine motor skills start to shut down in my hands.

And so as we stopped, I immediately donned a puffy down parka, thick mittens, and a wool cap. I drank from a hot thermos. A combination of 20-30 mph winds, shade, and low blood oxygen content left us feeling really cold that morning, despite a temperature somewhere around 20 Fahrenheit. My buddy was struggling with super cold hands, so I lent him my mittens + some hand warmers and switched to ski gloves as we continued ascending.

So Close, and Yet So Far

Bundling up and refueling made a world of a difference for me. As we approached the high ridge, I felt a second wind coming on. We had reached 13,750′ and had just 300 vertical feet left.

From here the wind grew fierce. You could see wisps of snow (spindrift) getting pulled off the mountains. These were conditions I sometimes experienced growing up skiing in the northeast: what I liked to call “Quebec weather” since it was a form of on-resort misery somewhat unique to skiing in that province.

Just then my buddy experienced a pretty intense asthma attack. He pulled out his inhaler and sat for a couple of minutes. Problems had been stacking up for him: struggling to sleep at 11,000′, feeling queasy with the altitude, freezing hands, and a headache. He didn’t want to continue and I had to respect that decision. He offered to wait for me to summit. But sitting still in this weather sounded kind of dangerous as well.

We stood there miles from a plowed roadway. And the thought of a real medical issue arising up so high made me deeply nervous. Instead, we made the call to descend. Off the ridge and perhaps 500 feet lower in elevation, he began to improve rapidly. We were in the clear.

I’ll make an effort in these posts to discuss how each 14er got named. Unlike many of these peaks, Bierstadt takes its name from the first known ascent (at least according to European Americans).

Alfred Bierstadt reached its summit in 1863. A German artist immigrant to America, Bierstadt joined the Hudson River School of painters. These artists convened in New York’s Hudson Valley, often painting dramatic, moody landscapes of the nearby Catskills and White Mountains. Many artists traveled farther afield, painting American landscapes from the Rockies to the Sierras. As far as white men getting 14ers named after them, Bierstadt thus strikes me as among the most deserving.

I arrived solo, just one week later. I parked at the campground just before dawn and began powering up the closed roadway. A dearth of snow that week had left the roadway packed down and easily traversed. I reached the summer trailhead just as the early morning sun began lighting up nearby peaks with a faint alpenglow.

Conditions proved far more favorable this time around. My snowshoes crunched into hardpack, rather than sinking into fresh powder. Many windswept ridgelines along the trail were entirely devoid of snow. Spring was winning.

Back on the high ridge, I found myself just about as out of breath as last time. Nevertheless, I pushed towards the true summit. I found 30 mph winds replaced by a light breeze. Things felt downright balmy! Soon enough I reached the summit.

The trail seemed more crowded that day. Roughly a dozen hikers appeared in the span of my summit session. I welcomed the company.

Then I headed down towards the car park. The forecast called for more turbulent weather that afternoon. Already giant puffy clouds began to appear over the Sawtooth ridge between Bierstadt and Evans. I had bagged Bierstadt, albeit on two attempts.

One Reply to “Mount Bierstadt in Spring (1.8 times)”