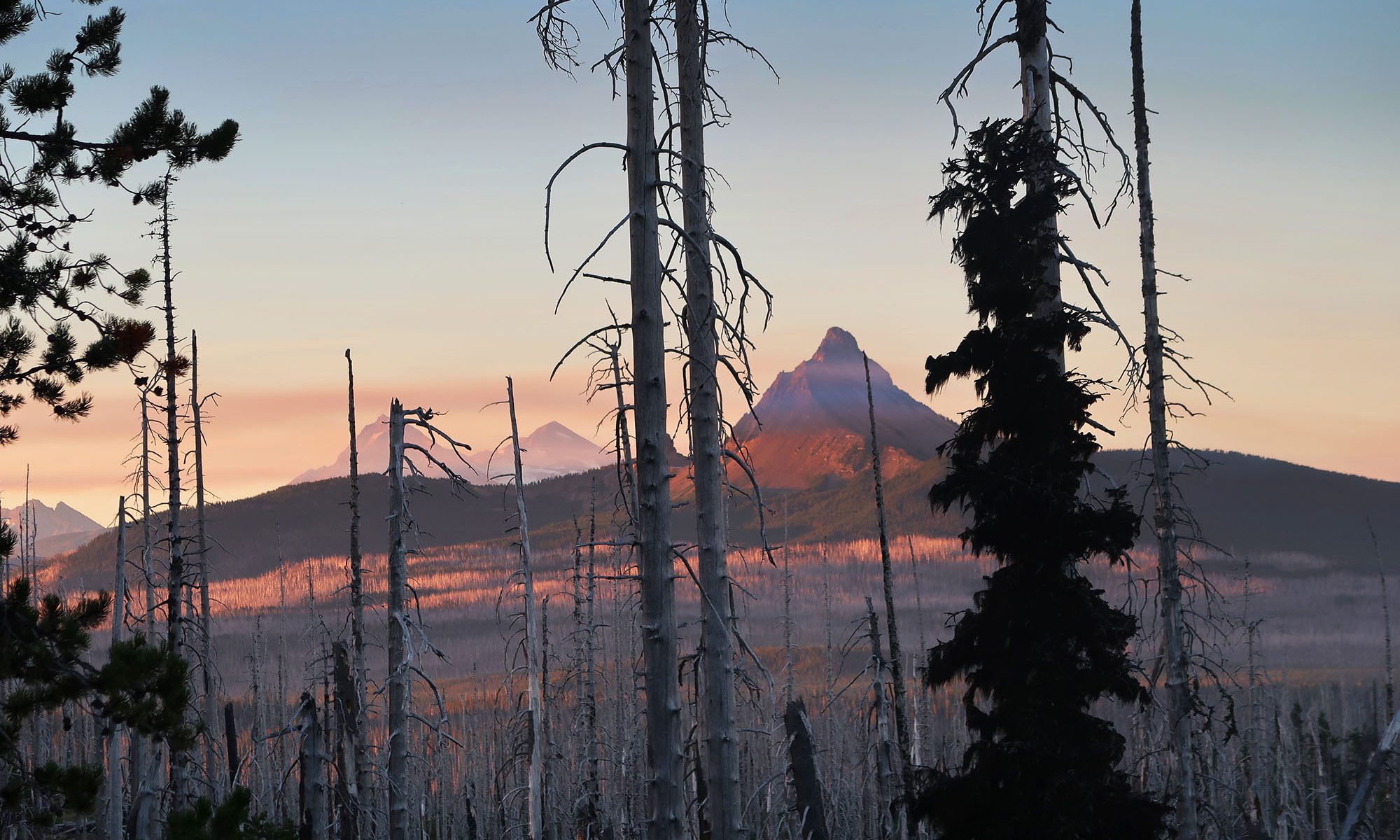 I met my guide just before dawn for our ascent of Three Fingered Jack: a craggy, prominent remnant of a shield Volcano in central Oregon. This would be, far and away, my most technical rock ascent. As such, we had met the day before at Smith Rock to tune up my climbing skills.

The journey began, like many hikes in the Sierras and Cascades, along the Pacific Crest Trail. Our short journey along this famous through-hike took us through a “ghost forest” of lush bushes and wildflowers, punctuated by towering remnants of dead pines. This foreground scenery was shaped by a wildfire from years past. But the layers of smokey haze refracting the early morning sunlight was very much the product of the present year’s blazes.

From the trailhead, another craggy volcano loomed over the landscape: Mt Washington. Three Fingered Jack’s twin brother rose skyward, through several layers of smoke—a loan mountain seemingly plucked from The Hobbit. I felt like a fire-breathing dragon might emerge at any moment!

The many risks of mountain climbing

As one of my first “technical” summits, Three Fingered Jack would provide an excellent lesson in the dimensions of risk involved in summiting a mountain. Hiking and climbing routes follow a “grade” system from 1 to 5. Class 1 routes, like the majority of the Pacific Crest Trail, are routes you can easily walk upright. They prove excellent for trail running and travel via livestock. Class 3 is solid “scrambling” … ascending high-angled slopes with ample use of hands. Finally, Class 5 is (typically roped) ascent up vertical faces. Classes 2 and 4 exist but have always been a bit nebulous to define, in my view.

But route class is just one dimension of risk in mountaineering. Setting aside snow and ice, there are still three other big considerations to worry about:

Our ascent of Three Fingered Jack would involve all five classes of climbing, plenty of teeth-chattering exposure, and a good degree of rockfall risk. That said, as a lower-elevation Cascade Volcano, it would be devoid of snow and ice. And the monotonic ascent would not present (much) commitment risk.

Up the scree slope, to the ridgeline

We approached the “base” of Three Fingered Jack, leaving the rambling dirth path of the PCT for the steeper “scree slope” to the ridgeline. My guide announced we’d be slowing to “grandma pace” … deliberately placing each step into the loose rock, which would give a couple inches, a bit like sand on the beach. Slowly but surely, we ascended higher.

Eight hundred vertical feet later, we had gained the ridge. Suddenly the views became more expansive. To the south I now saw not only Mt Washington, but also the Three Sisters and Mt Bachelor.

Out of the frying pan and into the fire: the ridgeline

After gaining the ridge, we rested for a few minutes before “gearing up”. This meant helmets, climbing harnesses, and rope. From here the ascent would be a diverse smorgasbord of scrambling, shuffles, and rock climbing.

At seemingly every turn, my intuition failed to pass muster against my guide’s experience with the route. I continually wanted to stay right along the top of the ridgeline. But multiple times he instead led us out to the right or left, shimmying across a sheer rock face, with a thousand-plus foot drop into oblivion beneath. On a few sections, we belayed each other: with one person sitting planted with our feet against solid rock, slowly letting out rope as the other headed onward along a steep falloff.

Many of these belays were not class 5 routes. They were simply incredibly exposed. Each time the pattern was the same: my guide would go first, sticking cams into the rock work, and threading the rope through carabiners. Then I would come through, released the rope from each one (but leaving the cams in place for the journey back.

Just before the summit came the only true class 5 pitch of the route. And, ironically, shimmying across to its base was way scarier than the actual ascent, which was just above a large ledge with ample room for a fall.

Around here, a pair of unguided climbers had caught up to us. They were, shockingly to me, completely unroped. The bolder of the pair overtook us, shimmying across to the final pitch, and working up the rock wall with only minor hesitation. His partner was a lot more apprehensive. Initially electing not to try the final pitch. We pressed on, with the safety and comfort of a belay system and anchors.

A few minutes later, we had gained the summit. At roughly 3,000 vertical feet, this wasn’t an especially vertical-intensive ascent. That said, I was surprised how little I had given thought to the effort involved. In my view, the mental toll of the climbing and exposure was far more distracting.

After some coaxing from his buddy, the other unroped climber eventually made his way towards the summit. When I commented on their feat of bravery, he shrugged and said “you didn’t fall, did you?” To this, I responded “well, I’ve also never crashed while driving, but I still wear a seatbelt.” Everyone has their own risk tolerance.

In mountaineering, they say the summit is only the halfway point. And sure enough, we were now required to repeat the ridgeline traverse in reverse! This began with a quick repel down the final pitch. Then after perhaps 45 minutes of retracing our steps, we were back at the base of the ridgeline. With all the cams cleaned and all the intense exposure behind, we removed our harnesses and I breathed a big sigh of relief.

Next, we descended the scree slope, which involved some fun sliding down the loose rock. This proved both fast and entertaining.

Halfway down the slope, I was delighted to spot a nearby mountain goat, moving upwards along the same slope. Perhaps he was on his way towards an afternoon summit bid.

Soon enough, we arrived back on the PCT. We took off our shoes, dumping a seemingly endless quantity of volcanic silt onto the ground. Then we tramped the few miles of trail through the woods, into the ghost forest and back to the trailhead. A successful day on Three Fingered Jack.