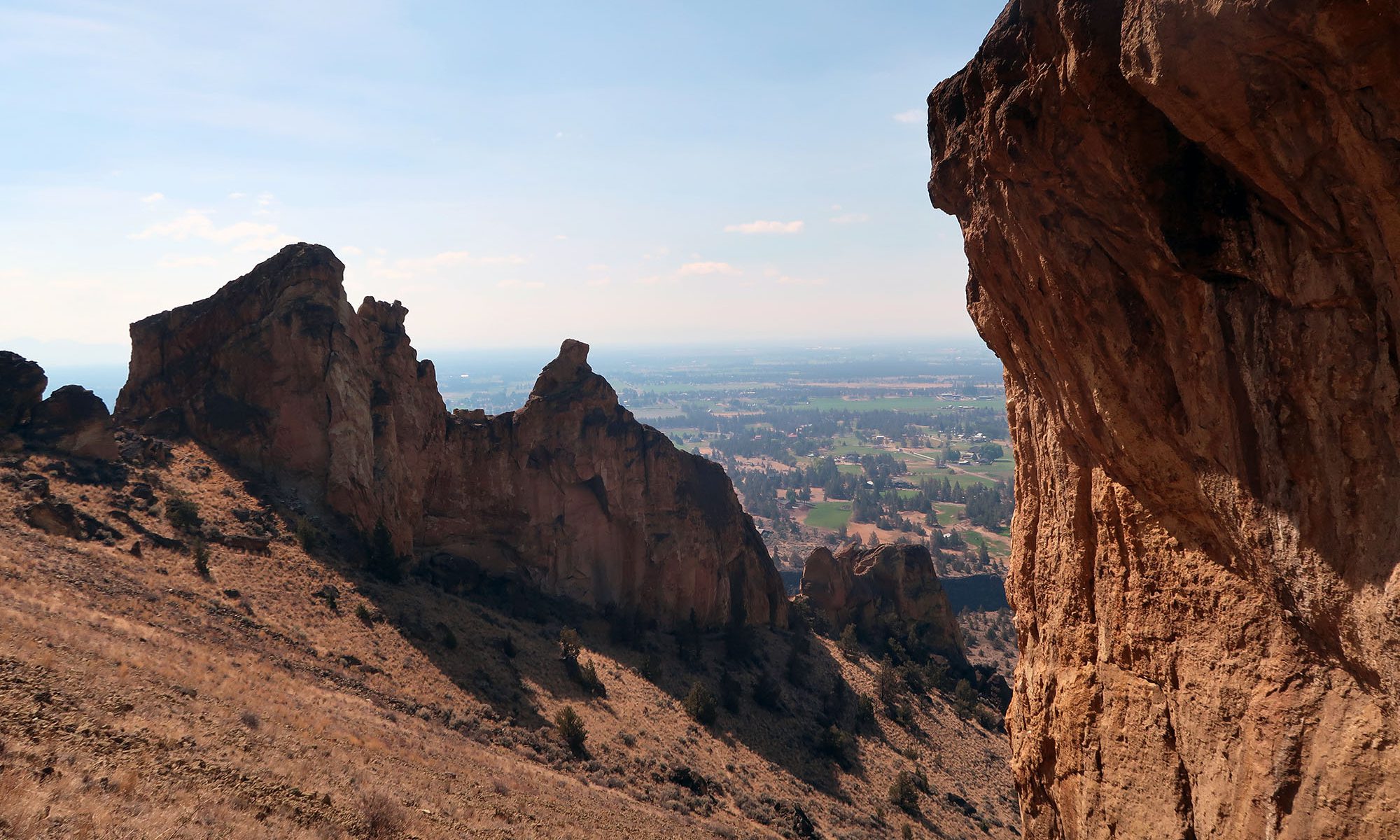 I met my guide in the parking lot at Smith Rock State Park for a day of introductory sport climbing. After introductions, and a quick gear check, we set off on a short hike towards the day’s climbing targets.

Smith Rock sits in Oregon’s high desert, east of the Cascades near the outdoorsy mecca of Bend. Like most things geological in the Pacific Northwest, the stunning rock outcroppings of Smith Rock are volcanic in origin.

Sport Climbing in the Marsupials

Our climbs that morning would take place in the Marsupials, a collection of massive rock outcroppings somewhat far from the parking area. The style of climbing was “sport” … meaning tiny steel loops were already bolted into the rock face. This meant that as my guide climbed higher, he could “clip in” the rope to the rock face, via “quick-draws” (pairs of carabiners). And As I followed him up, I would “clean” the route, removing quickdraws I climbed towards, and attaching them to my harness.

This was only my second time climbing outdoors (the first was just a month prior). So we stayed to mostly lower-grade routes: 5.7s, 5.8s, and one 5.9 pitch.

Our “big route” that morning was an ascent of Koala Rock, one of the largest Marsupials. This route featured “multi-pitch climbing”, meaning my guide and I would repeatedly re-group atop a pitch, switch belay and climber roles, and then continue upwards from there.

Multi-pitch climbing on “real rock” introduced a host of novel situations I had yet to encounter while rock climbing indoors. For instance, sometimes one of us would belay the other from a point far out of sight. Or we would reach an anchor and clip-in (and go off belay) while similarly out of sight. This suddenly made loud commands like “on belay” or “off belay” or “climbing” way less of a formality and way more of a strict safety protocol.

Koala rock (and many of the marsupials) jut out of a scree slope that continues further uphill. This meant that despite three pitches of climbing to reach its summit, we could repel off the backside into class 2 hiking territory with just one rope length.

Repelling was pretty cool! It felt a bit like lowering a fellow climber while belaying. Except you yourself were the one getting lowered. Pretty trippy!

My novice sport climbing adventure continued with a few more pitches. My guide asked if I’d prefer a more challenging route or a longer ascent. I opted for the latter. Without explaining much, he led me to a nearby pitch where we began our ascent. Four or five pitches later we found ourselves standing atop a very narrow spire. I felt both daunted and exhilarated!

As we made our way back towards the parking area, my guide pointed out the spire we had climbed, known as “Brogan Spire”. It looked pretty daunting from a distance.

The Marsupials as a warmup round

My day sport climbing in the Marsupials was incredibly fun and educational. But ultimately it was a warmup round for the next day. Back in the parking lot, my guide and I arranged to meet the following morning, before dawn, in the Cascades northeast of Bend. There we would tackle a true alpine rock climbing target: Three Fingered Jack.