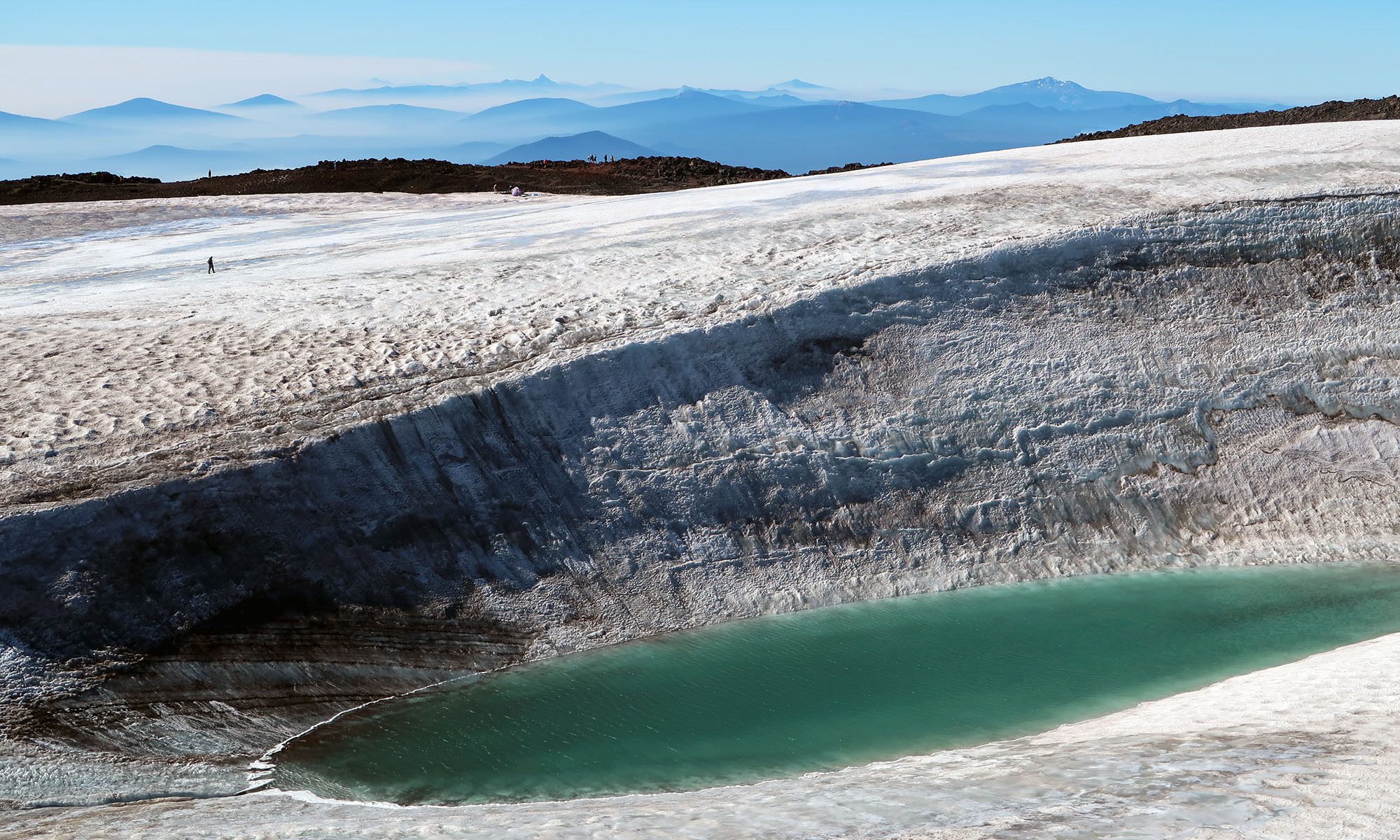 The day began well before dawn at the South Sister trailhead. It’s always smart to start a hike as early as feasible. But today this was doubly the case since it was Labor Day weekend and the forecast called for soaring temps by midday. Sure enough the parking lot was already starting to fill around 4:30 am.

South Sister is not a technical hike. And from a distance the peak looks anything but charismatic: more an amorphous mound of rock than a majestic cascade summit. But make no mistake: this is a rather beefy hike! I would climb nearly 5000 vertical feet to its summit.

From the roadway, the trail ascends roughly 1200′ through pine forests to an open, flat plateau. From there, you’re “out of the woods” for the remainder of the hike. To my right was Moraine Lake, with its popular campsites. To my left were the rolling foothills of the central cascades. In every direction, I saw evidence of relatively recent volcanic activity.

The well-worn path rambled onward across the pleasantly flat plateau. Looming ahead was South Sister, festooned with small alpine glaciers and permanent snowfields.

Roughly three miles into the journey, the trail began to ascend in earnest. 1800 vertical feet later, I arrived at the base of the massive cirque containing Lewis Glacier. The low-angle morning sun helped to clearly define its numerous, small crevasses. Above the glacier was the dramatic, arced headwall of the cirque. At its base sat a small, placid tarn.

The trail skirted the rim of the cirque, climbing onward 2000′ more towards the summit. A line of fellow hikers cut a stark profile along the border between burnt red rock and deep blue sky.

The trail to South Sister’s summit never feels especially exposed. That said, I still noticed the scree slopes getting progressively steeper (and the views more dramatic). The Willamette Valley to the west came into view, its depths masked by low-lying cloud cover.

After nearly a vertical mile of hiking, I finally arrived at the summit crater. South Sister may not look especially charismatic from afar. But up close and personal, this peak has extraordinary personality! A thick glacier filled the summit crater, with patches of melted ponds filled with saturated blue water. Apropos for Labor Day, some fellow summiteers had set up beach chairs and an umbrella nearby.

I continued along the rim of the crater towards the true summit, on its far side. The views to the north were even more incredible. Looming in the near-distance were Middle and North Sister, nearly as tall as South Sister herself. Behind them, in the middle distance lay the cuspy rock spires of Three Fingered Jack. And in the distance, I could see the heavily glaciated slopes of Mt Jefferson.

I took some time to explore the views from along the crater rim. The northern rim of the summit glacier dropped off in dramatic fashion towards a small, deep glacial tarn. I was struck at how massive and thick this glacier appeared next to the tiny, ant-like hikers traversing around its rim.

As I walked along the northern rim, I noticed not one but two minor rock slides along the steep slopes of Middle and South Sister. The slides kicked up fine volcanic ash, lit up by the mid-morning sun.

I ambled back over the southern crater rim and began the long descent back towards the trailhead. It was now mid-morning, and the trail was packed with kids, couples and families enjoying Labor Day Weekend in a relatively safe and social way amidst the global pandemic. The descent proved fast and efficient. And the loose volcanic dirt made it relatively low impact.