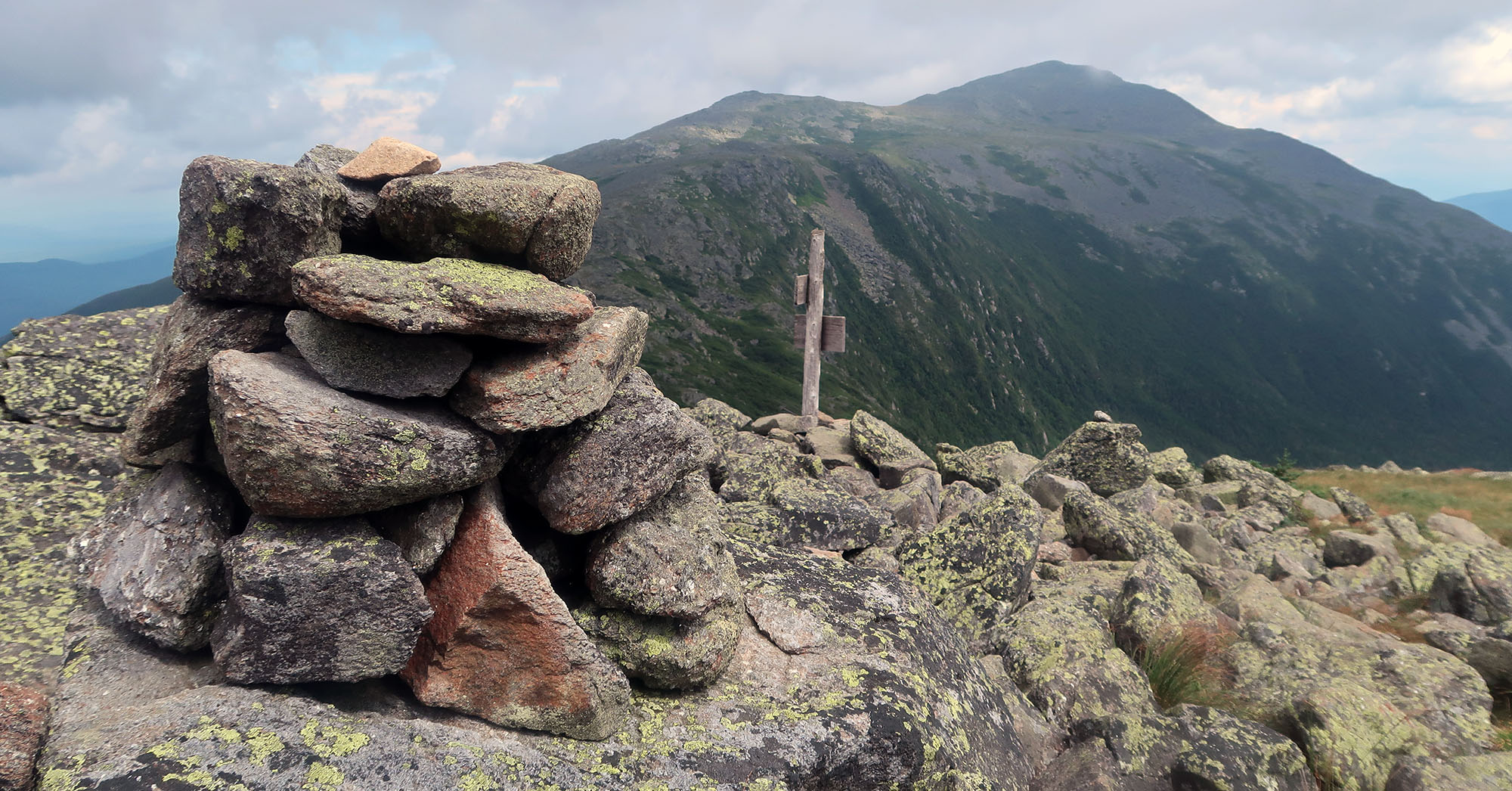 Tackling New Hampshire’s Presidential Range would form the centerpiece of my recent New England high point road trip. The massive peaks rise head and shoulders above any other peaks in the Northeastern US. A majority of the journey takes place at or above the treeline. And a series of huts, shuttles, and base camps run by the storied Appalachian Mountain Club can make the ambitious journey a touch bougier and more European.

I booked a night at AMC’s Highland Center the night before my journey. The upscale hostel provides meals, lounges, a library, and ample encounters with other outdoor enthusiasts. My original plan involved spreading the hike over three days. On day one, I would take a 9 am shuttle from Highland Center to the opposite end of the range, at “Valley Way”. Then I’d hike to the Madison Hut at treeline on the traverse’s Northern End (and quickly bag Mount Madison). On day two, I’d complete much of the traverse, summitting Mount Washington and concluding at the Lakes of the Clouds Hut. Day three, I’d finish up the peaks, heading as far south as Mount Webster before descending back to Highland Center.

This drawn-out game plan would involve no more than 4500 vertical feet per day (mostly front-loaded). It would involve summiting every peak in the range, dotting all the i’s and crossing all the t’s.

New Hampshire’s White Mountains boast of having “America’s Worst Weather”. Indeed, some go so far as to claim it the world’s worst weather. The Mount Washington Observatory famously recorded astonishing 231 mph winds back in 1936. This stood as the highest recorded wind speed for the better part of a century. Prevailing winds from across North America converge on the presidentials, leading to turbulent and unpredictable weather.

And the range is just plain exposed. It rises high above treeline in a part of the continent where that carries very heavy meteorological consequences. The tallest peaks of Maine and the Adirondacks (themselves home to intense weather) stand a full 1000 vertical feet shorter than Mount Washington.

I do wonder to what extent the claims may be overblown. It’s true the Rocky Mountains and the Southern Appalachians do not hold a candle to the Whites, in terms of wind and weather extremes. But when it comes to Rainier or Denali, I’m not so sure. At any rate, there is no fully staffed observatory on Denali (or K2 for that matter). So we may never know.

With all this in mind, I paid very, very close attention to the weather forecast! And while my trip’s forecast did not seem at all deadly it did seem a bit unpleasant. On the middle day, in particular, Mountain Forecast called for 45 mph winds and persistent rain. Yuck!

And this wasn’t just a matter of feeling wet and cold. Rainy days in the northeast typically mean cloudy summits. So I would essentially be hiking through a whiteout demonic carwash.

A change of plans

I woke up around 2:30 am the night prior and checked the forecast. No improvement. Then I hatched a plan. I would reverse my hike: forgoing the 9 am shuttle in favor of a slightly more “alpine” start. I would hike a majority of the traverse, to Madison Hut which I had booked for the first night. This meant the second, bad-weather day, I’d simply be heading down into the valley under tree cover.

Downstairs I met a helpful young man working the night shift at the front desk. He seemed a bit skeptical of this far more ambitious itinerary. I took his words of caution with a grain of salt: I was, after all, coming from Colorado and months of 14er-bagging. That said, he did convince me to bypass a few of the southern summits (from Webster to Eisenhower), and take the gentler Crawford Path towards Mount Washington. He helped me book a new shuttle back to Highland Center and I was out the door by 3:45 am.

By 4 am I was on the trail. My headlamp led the way up the steady ramp of the Crawford Path. The beam of my lamp cut a cold white cone through the thick, misty valley air. We were in the midst of a heat wave, and I soon broke into a steady sweat.

That said, I still felt excited and made relatively quick progress. The Crawford Path rises over 4400 vertical feet from Crawford Notch to Washington’s summit. That’s without adding any detours to other summits! My plan involved gaining 1000 vertical feet per hour and getting to the observatory around 8:30 am.

Around 6 am I pushed towards the tree line. Fierce winds in the northeast lead to the phenomenon of krummholz: a zone of stunted, mangled boreal forest that rises only a few feet above the ground. Around here, I bypassed the first of several lesser summits: Mount Eisenhower. I skirted around the eastern flanks of the upper mountain.

Early morning light provided ethereal views of the surrounding white mountains. At 4300′ elevation, I remained just below the clouds.

Lakes of the Clouds

My original plan involved reaching this hut roughly 36 hours later (headed in the opposite direction). Instead, I would forgoe a night in the largest and most famous of the AMC huts. Ultimately I wouldn’t feel too bummed about this. The more intimate Madison Hut gave me such an incredible experience. I remain skeptical that the massive Lakes hut could compete.

Instead, I pressed onward, for the concerted climb up the Crawford Path to Mount Washington’s summit. Visibility grew worse until I could see maybe 20 feet ahead of me. The windspeed also picked up. My forecast called for relatively light 35 mph at the summit.

Eventually, I reached New Hampshire’s highest summit. The 6288′ Mount Washington lords over the Presidential Range near its very center. It’s not at all a technical mountain, and you can reach it by car or train. But looks are deceiving. Washington has claimed roughly 130 lives, making it America’s second-deadliest mountain by total deaths.

I arrived right on schedule: 8:30 am. By luck, the visitor center rolled up its metal gates right as I arrived. I sat in the warm cafeteria with hot cocoa, Cabot cheese, and a pile of saltine crackers. The observatory and huts along the route provide shelter, snacks, clean toilets, and running water. This allows adventurers like me to pack light and push (slightly) the weather windows.

I lingered another 45 minutes, chatting briefly with some Appalachian Trail through-hikers. Then I started down the northern flanks towards the northern presidential peaks. A short way down the trail, I encountered the delightful Cog Railway. Hikers need to amble over its wooden ties.

Onward to the Northern Presidential Range

The compromise I chose for this abridged traverse involved bypassing just one more summit: Mt Clay. But after that, I committed to summiting the “big three” presidents: Jefferson, Adams, and Madison. The weather also began to improve. Winds plowed holes through the cloud cover, and many of the cols sat well below their layers.

The airy ridge trail traveled along large scree fields. Most hikers in the northeast find this kind of terrain slow and painful. To them, I raise you Colorado’s Mount Princeton. But overall, I did consider the northern presidential more intense terrain. Each peak added 500-800 vertical feet to the effort. In total, I’d accrue over 7000 vertical feet that day!

Around Mount Adams, the weather improved dramatically. And for a very brief moment, I caught a glance of Washington’s summit. If I had just slept in, it could have been me up there.

Towards the Madison Spring Hut

After summiting Mount Adams, I finally caught a glimpse of the Madison Spring Hut. The renovated, full-service hut sits in the col between the second and fourth presidents. Along these peaks I also saw Wildcat Ski Resort, just across the eastern valley.

I ambled down towards the treeline, dropping my pack at the Madison Spring Hut. After such an ambitious day, I had no need to summit Madison. Whatever went down the following morning, a window would present itself to summit. But the weather now had trended towards blue skies and sunshine. And I had ample time left in the day. Why not?

I continued, sans pack, to Madison’s summit. The steep path rose 500 vertical feet above the hut. I sat atop the summit for roughly 20 minutes, feeling pure triumph.

As if to remind me who was boss, a brief downpour then broke out. I descended Madison, increasingly soaked. I tried to shield my camera beneath my limbs. Served me right for dropping my pack! Ultimately, the rain let up and my camera was spared.

Around 2:30 pm my effortful traverse came to a close. At roughly 5000 vertical feet, the Madison Spring Hut would spare me 4000 vertical feet of down-climbing. It would also provide food, shelter, and crunchy camraderie.

I cannot stress enough how delightful the AMC hut experience can be. Sleeping in bunks with 40-plus strangers under a roof with no electricity struck me as a gamble. But it proved fabulous.

First and foremost, this is thanks to the hut “croo”. Four croo members (2 men and 2 women, all in their early 20s) ran an impressively tight ship. They haul supplies, cook meals, manage concessions, and lead educational discussions. Everything they do, from serving food to reporting the weather, seems to involve some clever, efficient, time-honored tradition. I’ve never seen a more highly motivated and professional group of folks in such a guest-facing role.

And then there are the hikers. Everyone was super friendly and loved chatting about the presidential range, hiking, gear, mountains, and the usual outdoorsy subjects. Folks ranged in age from middle-school kids to grandparents. Many folks had longstanding connections to AMC and the White Mountains. I even met a couple of AT through hikers treating themselves to an effectively 5-star hotel experience.

Before and after dinner I attended a couple of nice talks run by croo members. The first described the hut, its history, and its systems. Madison Spring enjoys a deep-bore well and running water. It’s outfitted with vault toilets and solar power for the plumbing. Between these talks and conversations with fellow hikers, I read some books from the hut library.

Back down to earth

Following a hearty breakfast, I began the long descent to Valley Way. Atop the ridge at Madison Hut, the weather thrashed about as promised. But down in the valley, I found sunshine and puffy white clouds. Such is life in the White Mountains.

I arrived with ample time to spare. Soon a guided group of hikers I met the prior night arrived at the trailhead. They would take a bus to near the cog railway and ascend up to the Lakes Hut (bypassing the ridge hike in the miserable weather). Other folks had chosen to brave the elements that day.

In short order, my shuttle arrived to take me back to Highland Center. A very convenient ending to a very spectacular experience. I considered if I’d come back to finish the missing peaks on my route. I imagined a spectacular October day with blue skies and orange valleys. Maybe the Presidential Range could deliver. Or maybe it was a fantasy in my mind. I think I felt quite content with the experience I had.

2 Replies to “The Presidential Range Traverse”