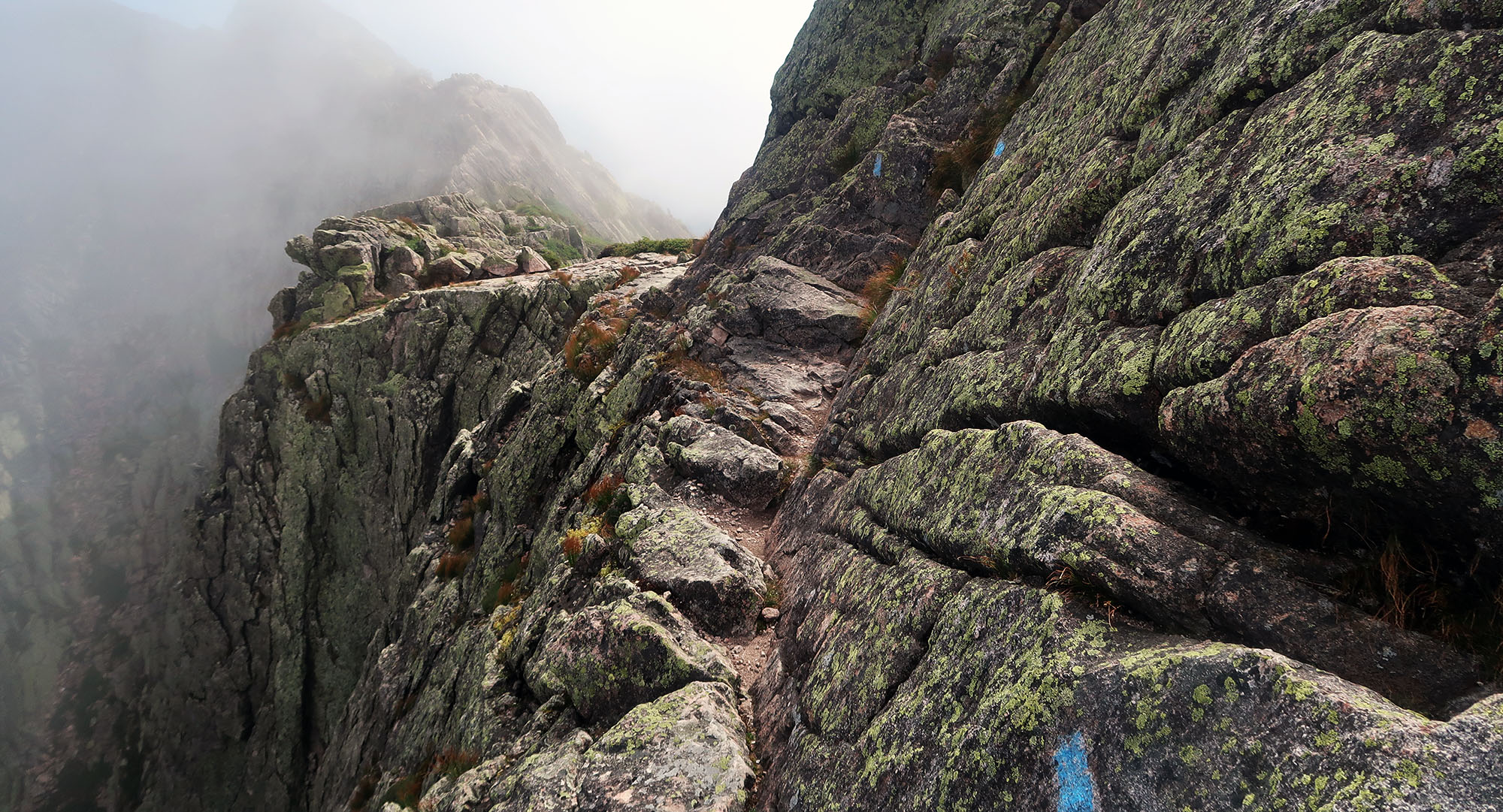 I set off from my campsite around 4:30 am. The beam of my headlamp produced a glowing cone of refracted light as it passed through the thick, foggy air. I signed the trail register at the ranger station. And then I began my trek towards Katahdin.

I felt more than a little excited. Because Katahdin is special. The isolated massif rises nearly a mile high, towering above the woods and waters of central Maine. Among northeastern summits, Katahdin boasts a unique blend of remote, rugged, tall, wild, and exposed.

There are perhaps a half dozen routes that ascend Katahdin. The Hunt trail ranks as perhaps the most famous. It ascends the mountain’s comparatively gentle western slopes, marking the final miles of the Appalachian Trail. But I chose an approach via the Roaring Brook Campground, which provides some more dramatic scrambles en route to the summit.

In particular, I settled on the “classic loop” as some enthused fellow hikers referred to it. I’d hike into Chimney Pond from Roaring Brook. Then I’d scramble up the exposed rocky ridgeline on the Cathedral Trail. This would deposit me quite near Baxter Peak (the true summit). Finally, I’d descend via the infamous “Knife Edge” and the Helon Taylor Trail.

The first 3.5 miles took me around the eastern flank of the massif. The trail rose gradually, ascending roughly 1500 vertical feet en route to Chimney Pond. I passed babbling brooks and quiet ponds reflecting the dawn-dappled clouds. These first, easy miles reminded me of similar approach routes in the Adirondacks. Even at these somewhat lower elevations, thick boreal forests dominated the landscape.

Roughly 90 minutes into my day, I arrived at Chimney Pond. By now, the morning sun illuminated the rocky cirque above the encampment. Many Katahdin-bound adventurers will secure camping permits at Chimney Pond. They backpack into the high lake basin the night before their ascent.

Personally, I prefer a longer summit day if it means I can avoid freeze-dried dinners and a skimpy sleeping pad. Instead, I opted to car-camp near the trailhead at Roaring Brook. No matter how you choose to enjoy Baxter State Park, you’ll need some flavor of reserved permit off their website. This includes simple day trips, which provide some excellent smaller hiking opportunities.

I poked up to the pond itself to savor views of the rugged cirque that forms the summit “table”. Then, I quickly sought out my ascent path: the Cathedral Trail. There are multiple routes from Chimney Pond toward the summit. The Saddle Trail ascends more gradually to the col between Baxter and Hamlin Peaks. Katahdin represents less a single summit and more a distinct cluster of a few peaks. Baxter Peak rises the highest, but Hamlin is also relatively tall and prominent. You can ascend any of the trails, but rangers do not recommend descending the Cathedral route.

The Cathedral Trail provides an exhilarating scramble from Chimney Pond to the summit ridgeline. Its steepest half mile rises 1500 vertical feet. The majority of the route features hands-on scrambling amidst boulders and slabs and pockets of krummholz.

While the route certainly qualifies as Class III (scrambling), it never feels particularly exposed. I took my time following the ample blue blazes. The rock on Katahdin is high quality: dry, grippy, firmly rooted, and full of features for your hands and feet. It’s also beautiful: speckled with lichen and various minerals.

The “cathedrals” themselves refer to rock outcroppings along the climb. At least one of them seemed very obvious. They definitely served to nicely break up the effortful ascent.

As I rose higher, I saw a group of hikers across the cirque on the famed Knife Edge. Their tiny silhouettes stood in opposition to the sky and clouds.

I eventually reached the summit ridge, well above the tree line. A thick cloud had settled onto the summit itself. And so I sadly did not enjoy sweeping 360-degree views. The wind whipped about at a healthy clip. I hadn’t run into a single fellow hiker since leaving Chimney Pond. And I wouldn’t meet anyone until just after summiting (running into the folks I spotted along the Knife Edge).

From the sign, I saw the classic white blazes of the AT marching south towards Katahdin Stream campground. It blew my mind slightly, how these blazes would continue through fourteen states and over 2000 miles. And for most through hikers, these were the very last of them.

My journey would not take me onto the AT here. Nor would I re-descend the Cathedral Trail or Saddle Route. Instead, I would test my mettle on the Knife Edge! And so I continued following blue blazes, into the mist.

The Knife Edge extends northeast from Baxter Peak, sloping down towards Pamola Peak (another, minor summit). The route descends from the summit gradually, with only minor ups and downs. But on either side of it, rocky cliffs and slab slopes descend roughly 1500′ towards tree line and the mellower forested slopes below.

I’m not a huge fan of exposure. That said, living in Colorado and hiking 14ers, I have grown more accustomed to it than the average hiker. So take it with a grain of salt when I say the Knife Edge is not that bad.

For starters, a majority of the traverse involves upright walking on a relatively broad ridge crest. And the headier sections feature super solid, grippy rock. That said, there are definitely a couple no-fall zones that can feel slightly dizzying.

As I remember it, there are three “crux-ier” sections of the route. The first (from the peak) involves scrambling along a narrow rock rib (prior photo). The second involves upright walking along a narrow ridge (lower photo). The third occurs at the col before Pamola Peak (the bottom of the traverse). There, the scrambling gets quite steep and sustained. Overall it’s less work and sustained climbing than the Cathedral Trail. But it’s definitely more exposed.

The ridgeline skirted just beneath the clouds that day. Wisps of mist and fog would momentarily obscure the views. Then a gust of wind restored longer sightlines. I had the ridge mostly to myself, though hikers atop Pamola Peak came in and out of view. It felt incredible surreal.

After the final, steep scramble to Pamola Peak, I was back in standard hiking terrain. This sub-summit was rather crowded with hikers. Many chose to descend from here given brisk winds (maybe 20 mph).

I began my descent along the Helon Taylor trail (pronounced HE-lon). This proved a bit steep but very manageable. Slowly but surely I descended back into the valley. I found some wild blueberries along the route. Very Maine!