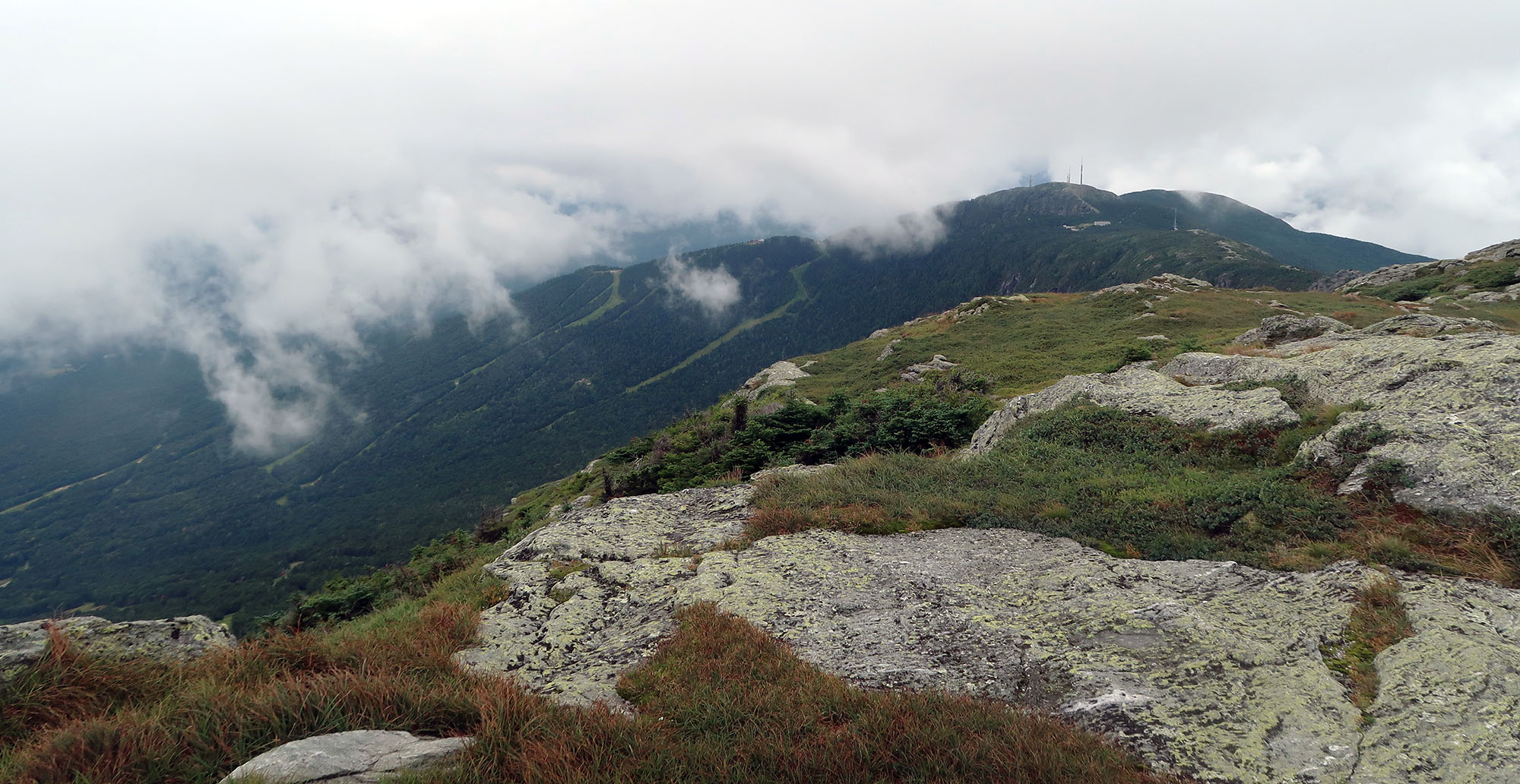 Vermont’s tallest peak. Mount Mansfield, holds a special place in my heart. We grew up skiing on its lower slopes, at Stowe, and visited the area numerous times in both winter and summer. There are layers of history to this mountain, from rum runners to the aprés glitterati of the mid-20th century.

You can approach the true summit of Mansfield (the “Chin”) via numerous trails or modes of transit. A toll road brings you towards the high ridgeline, taking most of the bite out of hiking it. Stowe’s iconic red gondola also gets you within 800 vertical feet of the top. And several hiking trails can take you from valley to summit the “proper way”.

Of these routes, I naturally decided to try the hardest/most painful approach: the Hell Brook Trail. The route rises rapidly out of Smuggler’s Notch, up the steep and rocky Eastern flank of the mountain. When given the chance, I never shy away from a good rock scramble. And so I set off from the ski resort parking lot, up into the notch, to the trailhead.

Perhaps a half hour later, I reached the trail. Many online reviews lament how steep, muddy, mossy, wet, and slippery this approach can be. Early on I passed a Quebecois family who quickly decided this route was a little too extra.

The ‘trail’ ascended roughly 2000 vertical feet in under a mile. Along the way I ambled over rocks and roots and ledges.

Mount Mansfield and Smugglers Notch manage to catch a lot of weather systems that linger amidst its steep, lush slopes. This cemented Stowe resort early on as a premier skiing destination in the Northeast. Unfortunately, it also means the Hell Brook Trail manages to stay wet and shady more often than not. I found myself slipping and sliding on moist, moss and lichen-covered rocks.

At one point, on a bare rock slab, my hiking boots began to slip. Despite maintaining contact with rock with both hands and feet, I began to slide down the slab. I gained speed, the rough wet surface taking a layer of skin off my fingertips. Fortunately, the slab ended in boreal thicket. A dense wall of pine branches arrested my descent.

Roughly two hours into the hike, I reached the end of the Hell Brook trail, having arrived on Mount Mansfield’s alpine ridgeline. A series of wooden signs pointed the way forwards.

Many roads to Mount Mansfield

A short ridge walk from the toll road provides the easiest ascent to Mansfield’s true summit (“The Chin”). But other great routes exist to take hikers directly from the valley. The Haselton Trail ascends a gentler path through Stowe’s trail system. Vermont’s famous Long Trail ascends from Smuggler’s Notch a bit south of Hell Brook. This backpacker-friendly approach features ample switchbacks. Still other trails approach from the opposite (western) side of the ridge.

I would only recommend Hell Brook to folks familiar with scrambling. And then, I would only advocate an ascent. There are way more enjoyable ways to come down the mountain. And please, do not underestimate how slippery this route can be! There is a big difference between rock that gets wet in a rainstorm and rock that permanently exists in a moist state.

I continued along the far gentler ridgeline towards Mount Mansfield’s summit. I now traversed along the famous Long Trail, which runs the length of the state along the spine of the Green Mountains. After a final short burst of scrambling (on grippy rock), I reached the top.

The summit existed in a cloud that morning. Many groups of hikers sat atop its bare rock, waiting for some views to potentially open up. I sat amongst them and enjoyed some snacks.

Eventually, the wind did plow some holes through the clouds. I caught glances of the ski resort below. On the opposite side, bits of Lake Champlain came in and out of view.

Satisfied, I continued down the Long Trail, along Mansfield’s high ridgeline.

The Man in the Mountain

Mount Mansfield’s summit ridgeline runs for nearly 2 miles above treeline. Here, the Long Trail passes through many acres of rare and fragile arctic/alpine flora. Only two other summits in Vermont feature this ecosystem, and there in far smaller quantities.

This ridgeline passes over numerous minor summits that form a sort of profile of a man (facing up towards the sky). Those summits are known as the Adam’s Apple, Chin, Nose, and Forehead. Some lips are also ostensibly involved. The Chin and Nose form the most prominent summits, the Chin rising the highest. My traverse took me past the Adams Apple, over the Chin, to just under the nose. From there I would descend into the ski resort.

This section of the trail proved quite crowded. Fellow hikers from the various trails, Toll Road, and Gondola all make use of this summit thoroughfare. Eventually, I reached the Toll Road and followed it down for a stretch toward the ski resort’s chairlifts.

I then began my descent back down towards where I parked. The lovely Haselton Trail provides a safe and sturdy route here. The trail popped in and out of tree islands between the ski runs. For the lower half, it meandered through a wooded ravine between the gondola and forerunner trail pods.

Eventually, I reached the gondola lot, and my big loop around Mount Mansfield had reached its end. Despite skiing and sightseeing on this mountain countless times, this was my very first trip to its true summit. Mansfield is truly a gem of a peak and showcases the very best of Vermont’s Green Mountains.