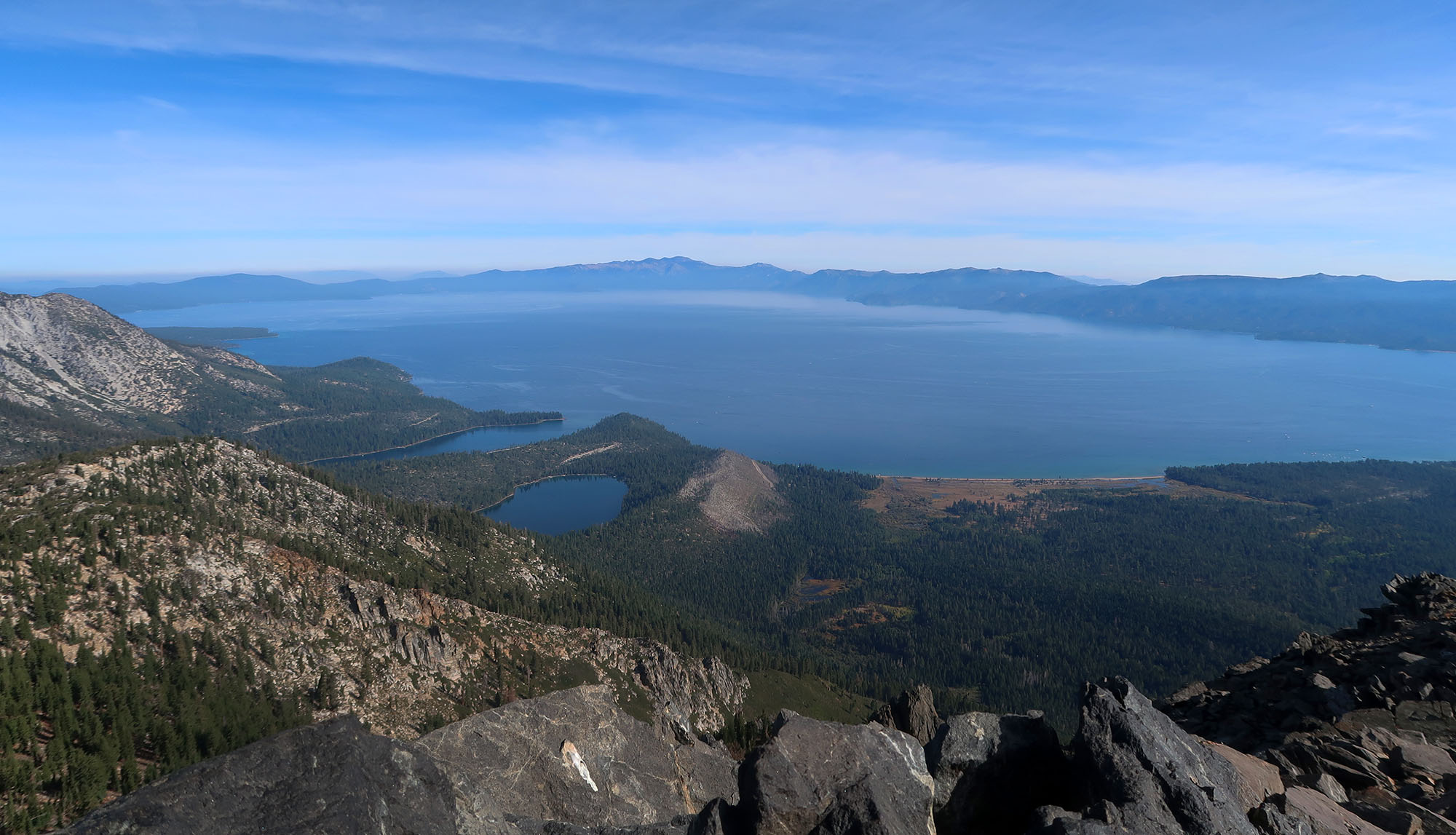 Dawn on the Slopes of Mount Tallac

I arrived at the trailhead shortly before sunrise. It was hot and dry as ever down in the Bay Area. But near the shores of Lake Tahoe was a refreshingly different story. The days were growing shorter. And 6000 vertical feet above sea level, with a chill in the air, things finally felt like a proper Fall.

The trail began its steady ascent through the woods at the base of Mount Tallac. Less than a mile in, I was treated to gorgeous views of Fallen Leaf Lake to the South. Towards the East, morning light began to spill over the Carson Range and onto the lakes nearby.

Mount Tallac ranks among the most popular day hikes around Lake Tahoe—and for good reason. The trail ascends a formidable 3000 vertical feet in just over five miles: enough to tire out any kids or dogs you may have in tow. And the summit ranks among the very tallest lining the massive alpine lake. Nearby Monument Peak stands a smidge taller. But set back from the lake and festooned with ski lifts, that peak doesn’t have the same natural vibe.

Soon enough, the trail entered the Desolation Wilderness. This day hike marked my second sojourn in this vast, beautiful wilderness area. In fact, the first journey (an overnight backpack) was supposed to involve summiting Mt Tallac. But endless snowpack and hot weather convinced me to scale back those plans.

Just 400 vertical feet later, you reach the second lake: Cathedral Lake. This provides yet another great resting spot before pushing up towards the high ridgeline.

Peeking into the Desolation Wilderness

The ascent grows a bit more concerted after Cathedral Lake. In total, you ascend roughly 1100 vertical feet from the second lake to the ridgeline. And the views towards the South and East grow only more expansive.

Then, upon reaching the ridge, the scene to the West opens wide. From there I could see the heart of the Desolation Wilderness: Lake Aloha and the barren, rocky peaks beyond.

The pine trees thinned out as I made my way towards the bare summit. Awesome “flag trees” revealed that strong, prevailing winds routinely pound Mount Tallac.

Thanks to my early start, I only encountered perhaps a half dozen other hiking parties en route to the summit. Not bad for a Saturday in September.

The trail ascends its third and final 1000 vertical feet along Tallac’s more gentle, southern slopes. From here, Lake Tahoe remains tucked out of sight. This means reaching the summit provides a “big reveal” of the main lake. Needless to say, those views were stunning.

Soon enough it was time to head down. I bounded down the mountain, passing an increasingly thick train of day hikers. The air grew warmer and warmer as the sun climbed towards its zenith. It was a beautiful Fall day in Lake Tahoe.