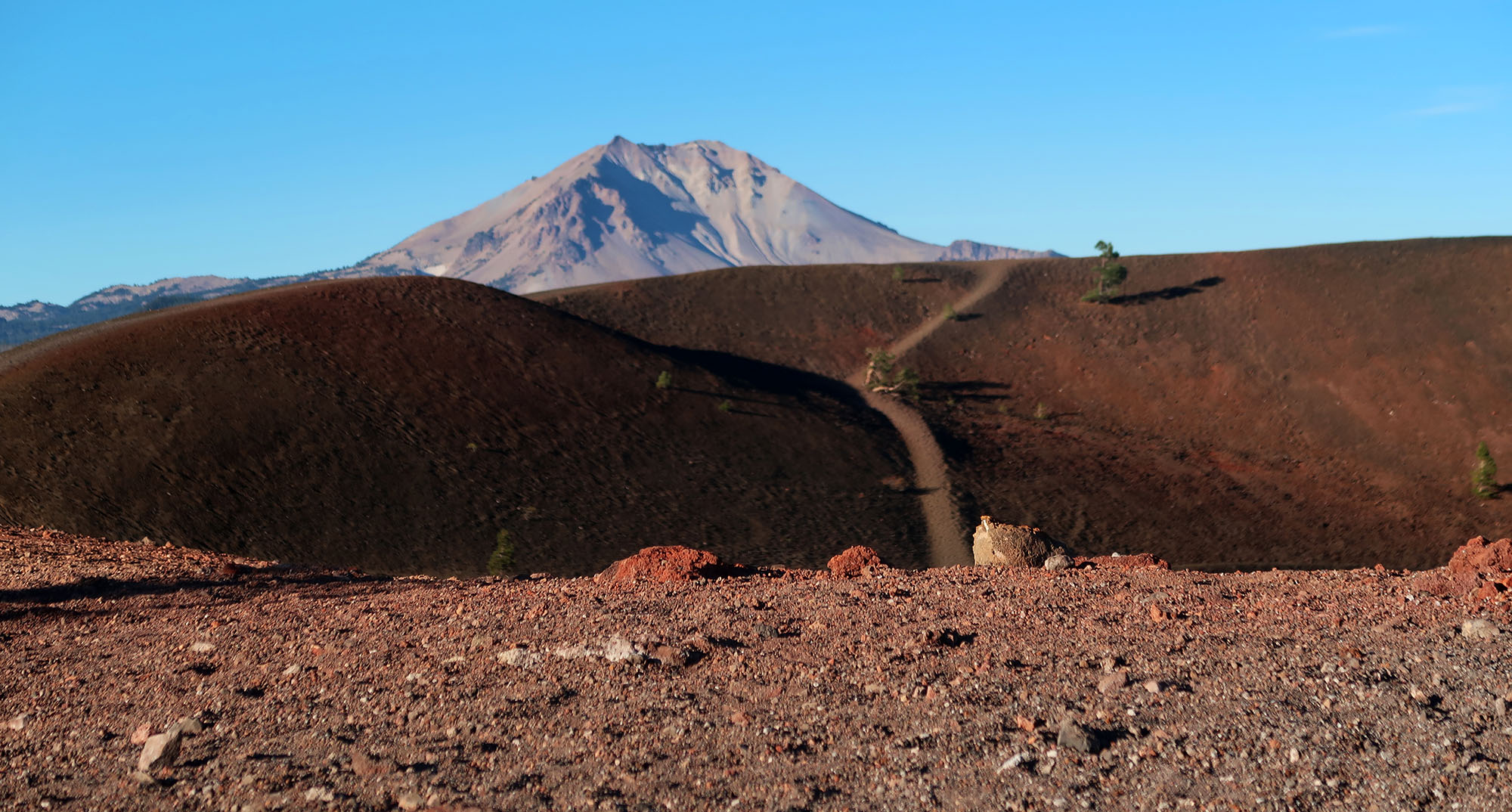 California lays claim to nine national parks, as of 2021—more than any other state. Some parks attract millions of annual visitors: Yosemite and Joshua Tree clocked 4.4mn and 3.0mn visitors, as of 2019. Luckily for NorCal adventurers, Lassen Volcanic flies comparatively under the radar. The park has seen just over half a million visitors, annually, over the past few years.

That’s just fine by me. Because this park is an absolute gem. During my brief, 7-month stint in the Bay Area, I made the four-hour drive to Lassen twice, to explore its incredible geological history. The park boasts examples of all four basic types of volcanos: shield, strato, cinder cone, and plug dome. Lassen Peak, the 10,457′ park centerpiece, is itself the largest plug dome volcano in the world. The park also features geothermal features that, while underwhelming compared to Yellowstone, are still pretty neat.

But my adventure this morning would take place far from Lassen Peak, the thermal features, and the main visitor center. Instead, I found myself bumping along a remote dirt road on the far north-eastern side of the park, towards Butte Lake and the Cinder Cone Nature Trail.

Lassen’s massive cinder cone volcano—creatively named “The Cinder Cone”—is one of the most unique experiences I’ve had in California. The route takes you up a massive, seemingly perfect cinder cone. The trail has a gross gain of roughly 1000 vertical feet over a four-mile out and back, making this a serious but manageable couple-hour hike for anyone in decent shape.

The first half of the trip out (roughly a mile) takes place under a sparse canopy of tall pines. Through the trees, you get teasing glimpses of the vast, open landscape to the south of dunes and lava flows. Then the cone itself comes into view.

Perfect geometric forms abound in mathematics but are somewhat rare in nature. Nature is messy and complicated. But this hike would be all about seemingly perfect conical sections. The cone was monolithic and nearly featureless. A couple of lone pines dotted its slopes. The morning light illuminated its eastern flank, highlighting its uniform curvature. And the nature trail ramped up its western flank, in an elegant swooping S-curve.

From base to summit, the cinder cone itself only involves 500 vertical feet of gain. But the soft volcanic sand complicates matters a bit. Every step involves sinking back an inch or two. So it’s a workout for your calves.

As I rose higher and began to circumnavigate the vast conical section, elements of the broader park came into view. In particular, Lassen Peak loomed large to the West. It looked quite charismatic lit up in the early morning light.

Before long, I gained the rim. That’s when I discovered, to my delight, that the cinder cone was more than just a single conic section. Instead, its interior sported multiple concentric rings. I felt as though I was wandering inside a massive, 3-D geometry lesson.

The few trees within the cinder cone stood in stark contrast to the dark volcanic scree. And nearly-horizontal early morning sunlight gave them a downright neon appearance.

I wandered along the high ridgeline, onto the inner conical section, and downward towards the interior base point. Along the way, Lassen Peak came in and out of view, poking above the rim.

The Painted Dunes and the Fantastic Lava Beds

I headed to the opposite side of the top crater rim from where I summited and began my descent down the far side of the cone. The views to the south and west were incredible. Below, spread out between the Cinder Cone and Lassen Peak, was a vast open plain of rolling sand dunes and century-old lava flows.

The National Parks Service has a fondness for grand, melodramatic names. These features I saw below were naturally called the “Painted Dunes” and the “Fantastic Lava Beds”. And yeah, they were kind of fantastic.

After descending into this vast landscape, I was tempted to wander westward along the long excellent backpacking routes. But this trip was merely a weekend jaunt, so instead, I made the 1.5-mile trek back to Butte Lake. It was a stunning morning amongst the volcanoes.