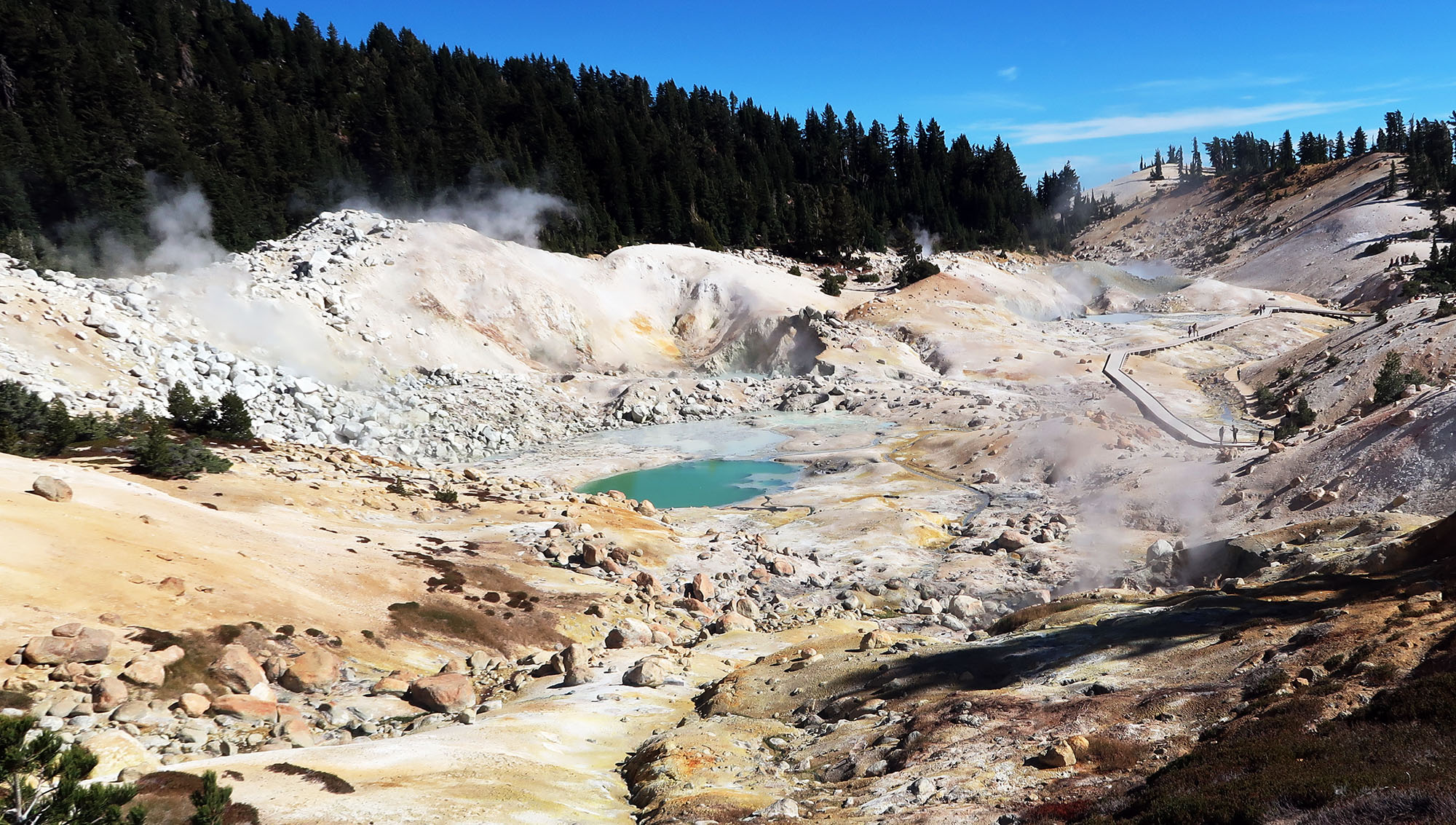 Bumpass Hell forms the largest geothermal area in Lassen Volcanic National Park. The thermal features sit just southeast of Lake Helen, via a short, flat trail. But I decided to access the very popular (and crowded) area via a longer hike with more vertical, from Cold Boiling Lake.

This trail rises roughly 1000 vertical feet over two miles. It’s still a moderate hike over even ground—good for families and casual hikers—but a lot less crowded than the ‘standard’ route.

Early on I passed a heartwarming sight. A fellow hiker had dropped their car keys on the trail. Luckily, some other folks had created a big arrow pointed at the keys from small rocks. The more hiking I do, the more small acts of kindness like this I see. It’s a reminder that the vast majority of people are helpful and decent.

A short while later, I passed Cold Boiling Lake. In theory, natural outgassing from beneath the lake creates bubbles on the surface. Which sounds pretty cool. Unfortunately, I saw zero evidence of this.

After the lake, the trail rose steadily up the hillside under a canopy of tall pines. Then it opened up to reveal sweeping views of much of the park. There are very few deciduous trees in Lassen, but plenty of bushes and shrubs. And this being October, many were painted red and burnt orange. This was the closest I got to ‘foliage’ this Fall.

The climb continued at a steady clip. But soon enough I reached the main event: Bumpass Hell.

An early settler in the area, Kendall Vanhook Bumpass, apparently “discovered” these geothermal features. One day, while giving a tour to a local journalist, a thin layer of crust gave out and his foot plunged into boiling water. Bumpass’ leg was later amputated, and thus “Bumpass Hell” was born.

The main boardwalks through the area were crowded! Many groups of visitors roamed around, snapping pics of the various thermal features. The sites are rather underwhelming compared to Yellowstone, but still pretty neat. And the whole area had a whiff of rotten eggs.

After touring the boardwalks, I headed back down towards Cold Boiling Lake. It was my second hike of the day, and I was ready for lunch and some relaxation.

One Reply to “Bumpass Hell via Cold Boiling Lake”