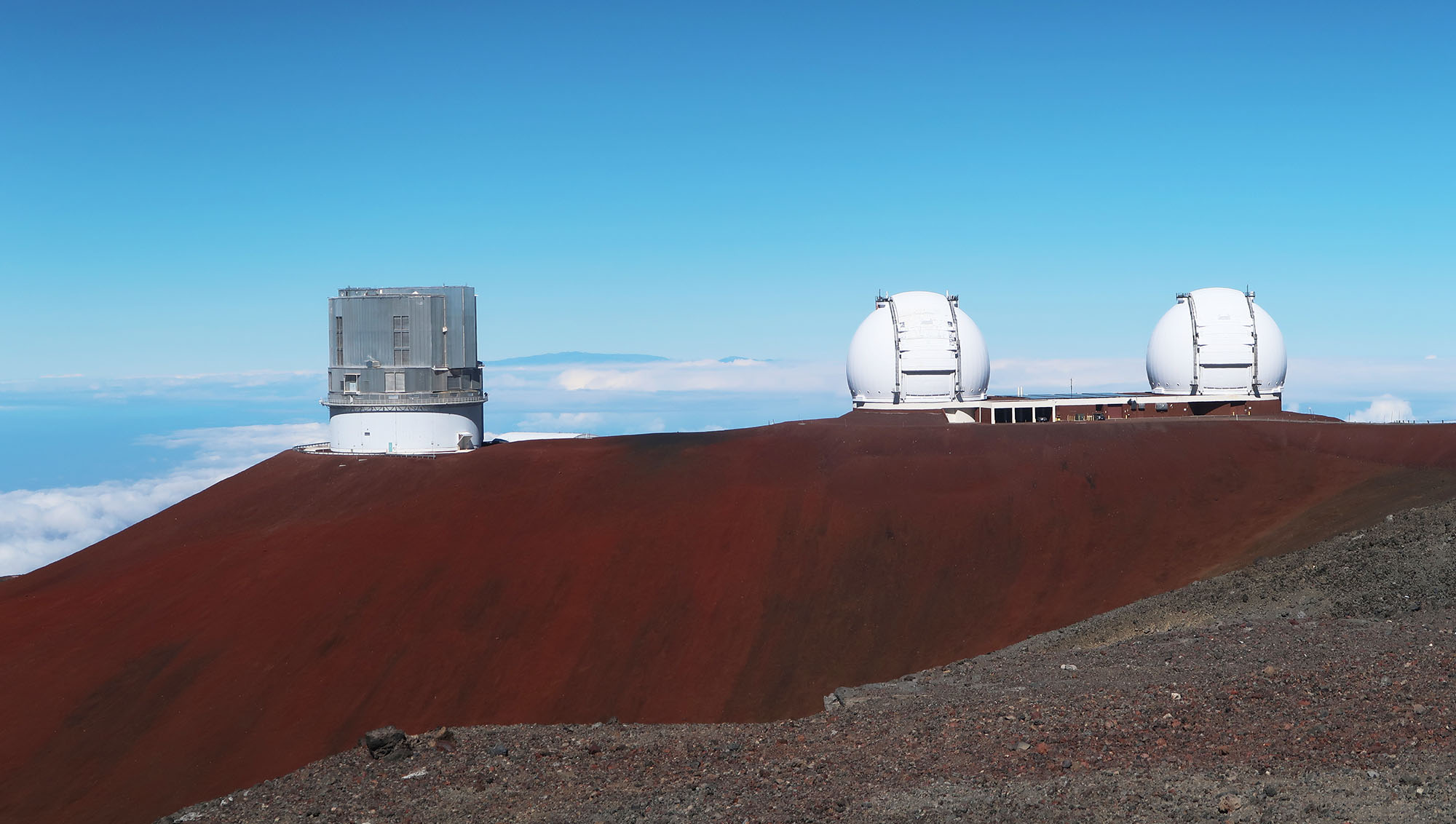 I arrived well before dawn at the Mauna Kea visitor’s center, roughly 9200′ above sea level. The complex sits six miles off the “saddle road” between the island’s two main population centers: Hilo and Kona. I parked in the empty lot, donned my backpack, and headed off for the Humu’ula Trail.

My ascent began under cover of darkness, with a clear sky full of stars. I braced myself for 5000 vertical feet of hiking spread over the next six miles. Slow and steady would win this race. Before long, the Sun began to peak through the maritime cloud cover below me.

Mauna Kea usually translates to “White Mountain”. The peak frequently sees snow in winter. The Hawaiian Islands are tropical, featuring year-round warm weather at sea level. But Mauna Kea’s summit lies 13,803′ above the beaches of the Big Island. The summit experiences its own distinct, alpine climate. And the massive volcano in fact shapes the weather for the broader island.

The mountain also goes by Maunakea (one word) which can translate as “The Mountain of Wākea”. According to Hawaiian creation stories, the god Wākea birthed the mountain.

Mauna Kea also holds an impressive roster of geological and cartographic superlatives. The 13er peak represents the highest point in the State of Hawaii. And measured from the ocean floor, many consider it the “tallest mountain on Earth”. Together with nearby Mauna Loa and other peaks, it forms the Big Island, the largest, newest, and most volcanically active Hawaiian island.

You don’t need to hike a vertical mile to experience Mauna Kea’s glorious summit. A well-maintained road provides access to its myriad summit telescopes. Most rental car companies ban visitors from driving this road. But the visitor’s center also offers guided transport to the summit.

I chose to hike the peak for several reasons. First, I love hiking. Second, it felt like a more orthodox version of achieving this state high point. Third, I was driving a rental car.

The Humu’ula Trail reflects this gentle, shield profile. The trail does not require any switchbacks. Instead, it simply marches right up the fall line of the mountain. It starts somewhat steep, but gradually moderates in angle towards the top. Make no mistake: this involves a lot of vertical rise. But the trail never ascends any particularly steep slopes.

Mauna Kea creates its own weather

The Big Island of Hawaii, like many Hawaiian Islands, experiences myriad weather along its disparate slopes. The Kona (western) side enjoys more dry, sunny weather. The Hilo (eastern) side often features abundant rain and cloud cover. Mauna Kea’s summit itself often features incredibly clear and calm weather. This makes it an ideal spot for massive telescopes.

As the morning progressed, clouds formed beneath the mountain’s upper reaches. It felt like I was on an island in the sky, rather than the ocean

Downslope I saw another geological point of interest creating its own mini-weather: Kilauea. Kilauea ranks as the most active volcano in Hawaii and the US. In fact, I could see evidence of its current eruption, as a plume of steam rose skyward and seemed to create a small cloud just above the crater.

I passed perhaps a half dozen hikers during my ascent and descent. Many of Hawaii’s most popular hikes have experienced severe over-crowding. But Mauna Kea doesn’t seem to attract a ton of hikers. I found it endlessly amusing that my Hawaii packing list would involve ski gloves, a wool hat, and goggles. Most people do not come to Hawaii to experience winter weather.

Near 13,000′, I passed a spur trail to Lake Waiau. Waiau forms the only large, natural lake on the Big Island. In fact, it’s one of just a few lakes in the whole state. The lake represents a sacred place in Hawaiian Culture. In fact, at times, the entire Mauna Kea summit region was considered off-limits to all but the highest-ranking Hawaiians.

Placing roads and telescopes atop Mauna Kea has proven a bit controversial with local Hawaiians. In fact, some folks suggest even hiking to points like the lake and the true summit disrespects Hawaiian culture. I don’t have any answers on this. But fundamentally I don’t believe mountain summits should ever be off limits to the public. That said, I did not descend to the lake.

Many of the world’s most powerful telescopes sit atop Mauna Kea’s summit. This includes the Keck Observatory, with two of the world’s four largest optical mirrors. Dark, clear skies endow this summit with fantastic observing properties. Short of going into space, you don’t get much better pictures than atop Mauna Kea.

From here, the trail joined a paved roadway. The road ramped up a large cinder cone towards the true summit. Now the sun beat down from high in the sky. Starting early proved to be a smart move.

The Summit of Mauna Kea

At long last, I reached the final trail section toward the volcano’s true summit. For the first time, I experienced views to the North and East. Poking through the clouds, I could see Haleakala, Maui’s major summit.

I enjoyed the summit largely in solitude. One other hiker joined me atop the peak that morning. I saw perhaps three cars the whole time as well. What a lovely moment of quiet reflection.

But soon enough, I started the whole process in reverse. The gently sloping trail made for a fast descent. In a couple of short hours, I was back down at the saddle. Mauna Kea was in the books.