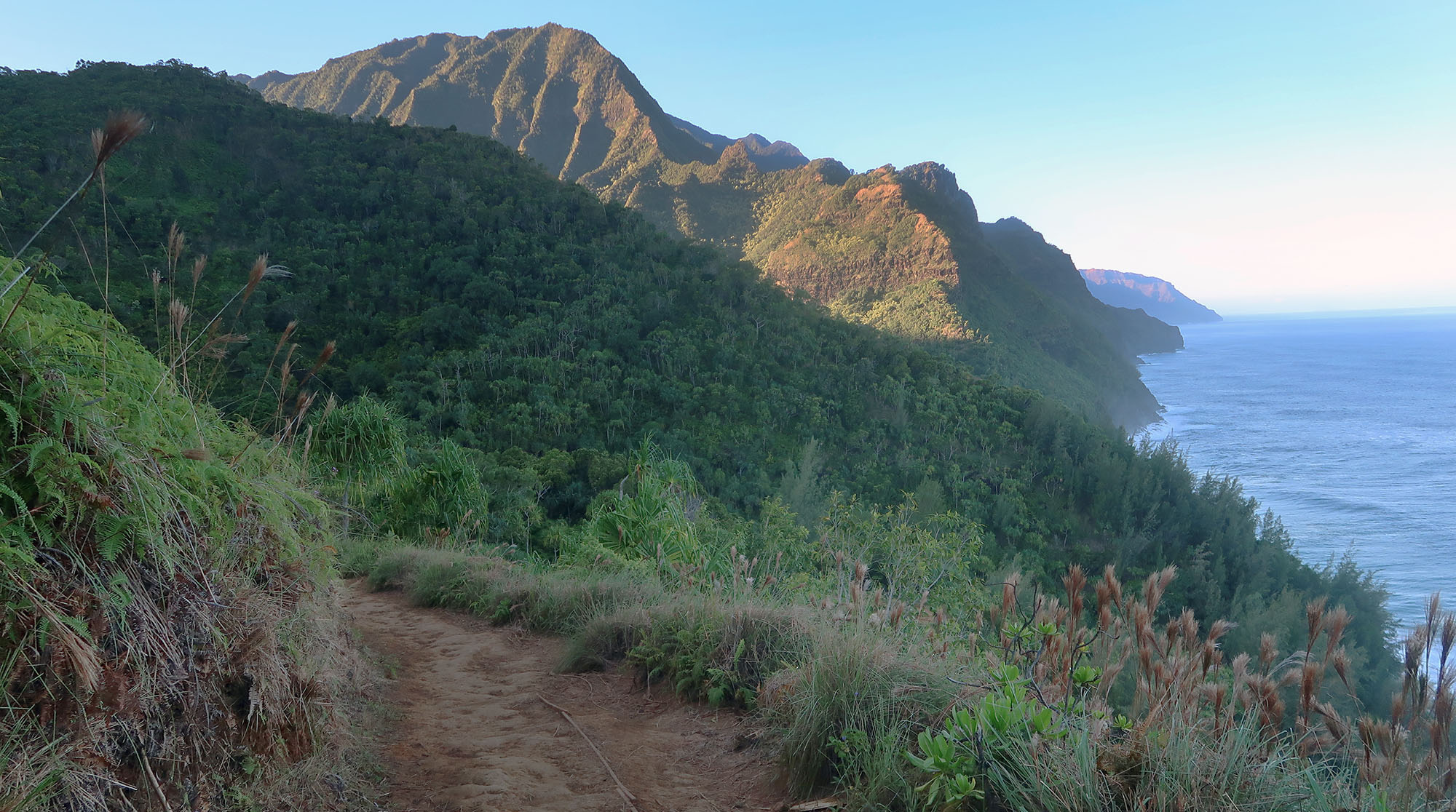 The Nā Pali Coast of Kauai

You may not know it, but you’re probably quite familiar with Kauai’s Nā Pali Coast. Jurassic Park ostensibly takes place on an island near Costa Rica. But the original film sourced its lush, tropical landscapes from Kauai. And the iconic helicopter shots bookending the movie’s main events prominently feature this stunning, rugged coastline.

Visitors can experience this unique landscape by boat or helicopter. But arguably the most intimate and adventurous approach involves hiking in. The Kalalau Trail provides the sole opportunity to do so, winding beneath towering, 4000′ cliffs.

The Hawaiin Islands form the world’s most isolated archipelago. And Kauai ranks as the least-developed major island in that chain. But in the era of jet planes and boundless American wealth, that doesn’t prevent major over-crowding. So to enjoy this adventure, the state of Hawaii now requires day permits or overnight camping permits. Most visitors will also need to arrive via shuttle (as we did).

The Kalalau Trail to Hanakapi’ai Beach

The shuttle dropped us off at Ke’e Beach, just inside Haena State Park. That day I was hiking with my brother and his partner. All of us were in Hawaii for a family trip. The route passed over boardwalks and beneath a canopy of lush trees. Then it began its ascent into the park.

The Kalalau Trail extends for roughly 11 miles along the Nā Pali Coast. With the proper permit, you can camp at multiple spots along this famed backpacking route. It terminates at Kalalau Beach. Nā Pali means cliffs or high cliffs in Hawaiin. Kalalau means “fluted leaves” referring to the folded curtain of green cliffs along the coast.

Our hike would only span the first two miles of this trail. The first 1.6 miles rose steadily to roughly 650′ above sea level. Then it descended quickly towards Hanakapi’ai Beach.

Before reaching the beach, the trail crossed the first of many rocky streams. Signs warned us of the powerful, lethal rip tides found in these deep waters.

We arrived quite early that day, while the sun was still low in the sky. The trails would grow quite crowded later on. But that morning, only a dozen or so other hikers shared the beach with us. No roads lead towards Hanakapi’ai Beach. It sits tucked away among tall cliffs and a thick, tropical forest.

Day-use permit holders (like us) cannot hike beyond Hanakapi’ai Beach along the Kalalau Trail. But our adventure would continue a few miles further along the Hanakapi’ai Falls Trail.

The ascent to Hanakapi’ai Falls

We turned away from the coast and began the ascent towards the waterfall. The first 1.6 miles rose 600 vertical feet, at a somewhat steady pace.

This coast of Kauai receives an enormous amount of rainfall each year. And this trail sees a truly massive amount of daily foot traffic. Combined, this means a heavily eroded trail. We trudged up steep, muddy slopes. Many times the trail crosses a swift-running stream along boulder hops. Washed-out sections, filled with small boulders, slowed our progress. After two years hiking mostly in the arid American West, the trail reminded me more of hiking mountains in the northeast.

The last quarter mile of the hike roughly doubles the ascent from the beach. That puts the round-trip vertical for this hike at roughly 2,600′. No small task!

A deep, cold pool of water forms at the base of the falls. I’d put the pool at roughly 150 feet in diameter. After a long, sweaty hike, it was time for a refreshing swim.

Many folks swam behind the falls and climbed up onto small ledges under the cliffs. And depending on the flow rate, you can swim beneath the falls. The day we went, I found the falling water entirely pleasant. The pool feels freezing at first, but you adjust.

After drying off and getting dressed, it was time to go in reverse. As midday approached, the trail grew increasingly crowded. At several points along muddy, rocky ledges, we had to wait and alternate with uphill-bound hikers. Standard trail etiquette involves allowing uphill hikers the right of way. But the stream of traffic was so heavy, we simply began taking turns.

Back at the beach, we took time to explore some small caves beneath the cliffs. We rested up before the final ascent along the Kalalau Trail, back to the shuttle.