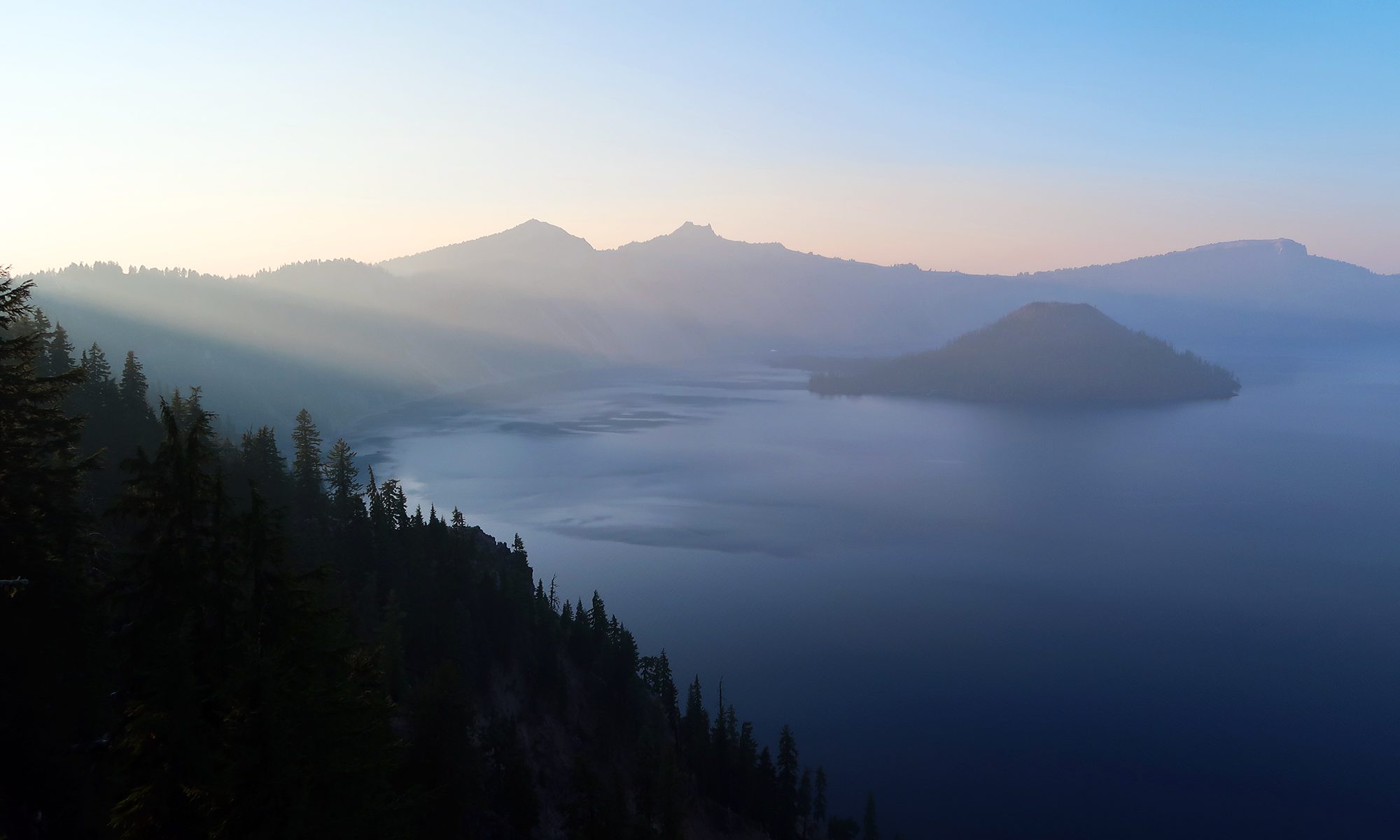 I arrived just before sunset to Rim Village, having driven that day north from the Bay Area. The summer and Fall of 2020 will forever be known for two things on the West Coast: COVID and fires. Evidence of the latter hung in the air over Crater Lake, which seemed visibly thick with smoke. I felt as though I were standing on the edge of a massive cauldron.

That said, the smoke failed to prevent a clear sightline across the lake that evening. If anything the smoke seemed to enhance the sunset. Low-angled beams of light passed over the caldera rim and across the lake past Wizard Island. And the smoke betrayed a sharp line between the sun’s rays and the shadows beyond.

I spent perhaps a half hour, meandering along the ridge near Rim Village, working my way towards the Crater Lake Lodge and taking in the spectacular scene. Crater Lake had long been on my bucket list of top natural wonders in North America. And it did not dissapoint!

Eventually I made my way towards the Garfield Peak trailhead. The trail passed through an open meadow and then through trees to where the trail began to climb up the ridgeline. I only made it about a third of the way up. I didn’t intend to summit that evening, just to soak in the sunset.

Crater Lake became the 5th US National Park in 1902 and remains the lone Oregon park. The lake is lined with dramatic, 1000+ foot steep walls, forming the rim of the “crater.” In fact “crater” is a misnomer—the entire site is actually a caldera. It formed when an ancient volcano, Mount Mazama, underwent a violent eruption. Its peak once stood roughly 12,000′ tall, rivaling the tallest cascade volcanos. In the eruption, an enormous chamber of magma beneath the mountain emptied out. With nothing left to support the mountain above, the entire structure collapsed downward, forming a rounded depression known as a caldera.

The lake itself is roughly 5.5 miles in diameter and over 1000′ deep. Snowmelt and runoff from the crater rim feed it, while very little water leaks or evaporates on an annual basis. But for the most part, it’s simply a giant, sealed tub of undisturbed, fresh water. Its depth and clarity lend the surface an enchantingly blue hue.

Wizard island, the larger of two islands in the lake, formed long after the major eruption. It grew from minor eruptions, over time, to rise above lake level. A few other similar cinder cones have formed, but remain below the lake surface. Wizard Island itself is a fairly impressive volcano, rising over 700′ above the lake’s surface. At its center is an actual crater, known as the Witch’s Cauldron.

An early start on Garfield Peak

I drove back down the side of the crater, towards Mazama Village at the southern end of the park. While the Crater Lake Lodge looked both nicer and more convenient to enjoying the park, it was also quite expensive! In addition to campgrounds, Mazama Village had some cute cabins with rooms at roughly half the rate. I was in bed early, and up before dawn, to return to the rim.

Then it was back up towards Garfield Peak. Instead of a sunset behind me, I was instead treated to a sunrise up ahead. My only complaint was the smoke: it was much thicker this morning!

Garfield Peak rises roughly 1000 vertical feet over Rim Village, and represents one of the highest points in the park. While nearby Scott’s Peak is substantially higher, it sits much farther back from the lake. Garfield thus represents the crowd favorite when it comes to views of the lake.

The trail rose ever-upward, remaining relatively close to the dramatic falloff into the lake below. This provided increasingly stunning views towards Wizard Island and the southwest portions of the lake. I saw just a couple other pairs of hikers, and a few deer, en route.

Smokey views from the Summit

Eventually, I reached the summit, where views to the north and east opened up. The smoke was now so thick, the far side of the lake remained out of sight. That said, it leant the whole scene an incredibly ethereal feel. In the distance, I could see tiny “Phantom Ship” island. Its rocky “sails” looked particularly ghostly in the smokey sunrise.

I was also struck by the expansive views to the east (at least in the foreground, given the smoke). Gorgeous alpine meadows sloped down off from the rim towards the treeline. Overall, this was an excellent morning outing: a lot of bang for not too much buck. And a perfect introduction to Crater Lake. Up next, I’d drive along the eastern rim, to get a closer look at Phantom Ship.