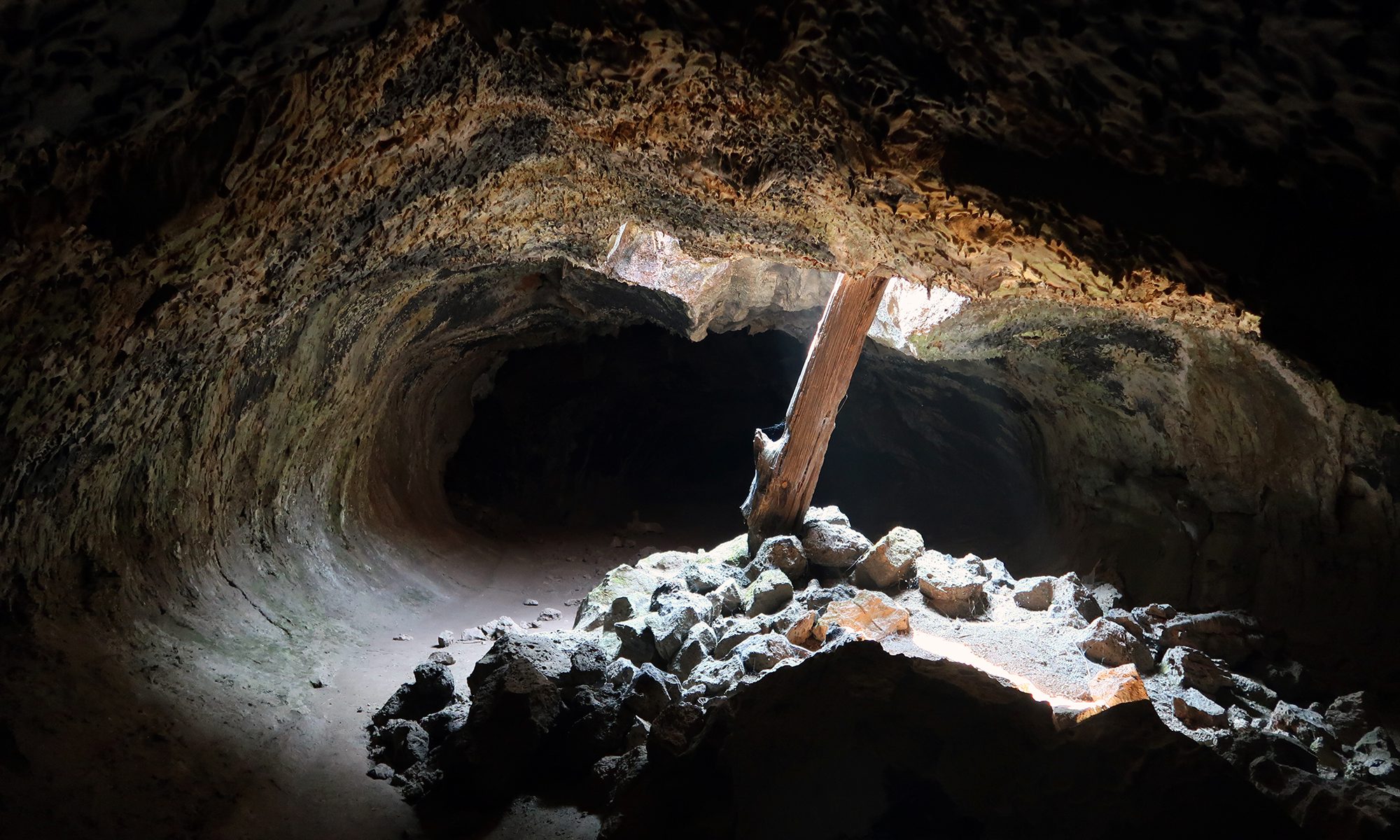 Lava Beds: Off the Beaten Path

Imagine the state of California in your head. Picture its shape on a map. Now try to think about the corner of the state you’ve likely spent the least time even considering the existence of. Congratulations: You now know where to find Lava Beds National Monument.

This park sits just 15 miles south of the border with Oregon, East of both Interstate 5 and US-95. The land sits low and flat. When I visited in late August, it was incredibly hot and dry. By 9 am the temperature sat in the mid-90s, and seemed to singe my nostrils. Driving in I saw a blackened landscape, freshly charred by wildfire. The air smelled like burnt wood.

I faced a dilemma the night before leaving the Bay Area for a vacation in central Oregon. My original plan involved booking it up Interstate 5 to the Mount Shasta area, where I planned to hike in Castle Crags State Park. Unfortunately both COVID and the wildfires had conspired against me, denying me both legal parking and sweeping views of Mt Shasta at Castle Crags. I searched aimlessly on Google Maps for some sort of outdoorsy alternative. Then I spotted Lava Beds.

Caves for all ages

Lava Beds is home to an impressive collection of lava tube caves. Nearby volcanic eruptions produced thick flows of lava that spread out over the flat landscape of the park. As the lava began to cool, the outer rings of these flows cooled and hardened much faster than the interior. The interior fluids continued to flow, eventually emptying out. The outer shell was left to solidify into solid rock. Thus “tubes” are formed.

The park features over a dozen named tube complexes you can explore. Some are tall and wide and easy to navigate. Others feature many branches, multiple levels and tight squeezes to explore, heading deeper and deeper underground. Nearly all of them are largely unimproved: devoid of fixed lighting and other infrastructure.

Before heading off to explore the caves, I stopped in to the visitor’s center. All visitors are required to obtain a (free) caving permit stamped with the current date. This involves a very quick screening process to make sure you’re not a risk to the bats that dwell in the caves.

Into the Dark Depths

Brochure-in-hand, I began my journey through a majority of the open caves at Lava Beds. The brochure ranked the caves in order of difficulty (easy, intermediate, difficult). All of them sit just beyond paved parking spots, with a paved path to a metal staircase. I found the entrances charmingly understated. I got a kick out of how a simple, unassuming staircase into a small hole would often lead to a much broader and more dramatic underground landscape.

If, like me, you’ve never gone caving before, here’s a quick gear rundown. Like any outdoor adventure, I recommend sturdy closed-toe footwear. Many tight passages require crawling on your hands and knees so long pants and light gloves also help. And of course, you absolutely must bring flashlights and/or headlamps. I began the day just using my backpacking headlamp. But by the last few (more advanced) caves I also used a small hand-held flashlight to shed more light on the situation. The visitor center can lend you a flashlight, if you came unprepared.

Above ground in the park, the sun baked the landscape into a hot, dry inferno. But inside the caves, I found the air cool and moist. Bacterial mattes and bits of fungi coated cave walls. The beams of flashlights and streams of sunlight formed sharp lines through the thick, misty air.

One of the coolest features of the caves were the bacterial mattes that formed neon yellow coatings on the wall. These deposits glistened and refracted flashlight beams, as if they were precious metals deposited in the walls.

Several caves were closed to visitors when I visited in August 2020. Hibernating bat colonies were responsible for a majority of the closures. But the recent wildfires also played a role. Of the open caves, I explored all of them except Catacombs, the most labyrinthine and challenging of the bunch.

My top recommendations include:

Mushboom: This cave sits right next to the visitor center. Permanent lighting, a concrete floor, and guard rails make this by far the most “user-friendly” cave.

Golden Dome: As its name suggests, ample bacterial mattes coat the walls and ceilings of this cave, lending it a truly golden quality. Although designated “moderately challenging” this cave didn’t involve much of any stooping. The complex forms a sort of figure-eight pattern, but it’s quite hard to actually get lost.

Hopkins Chocolate: Although this is labeled as challenging, it’s relatively short with minimal stooping. The trickiest part is getting into the cave, directly behind the stairwell down. Even if you don’t head inside, definitely check out the collapsed cave structure around the entrance. As the name suggests, the ceilings of this cave resemble dripping chocolate. Super cool!

These two lengthier and more challenging caves directly connect to one another. They involve a lot of stooping and squeezing through tight spots. But the way forward remains mostly unambiguous and the complex is just plain fun. I recommend tackling these guys after working your way through the easier caves and shorter advanced caves.

I spent hours exploring these caves! None of them were particularly long or challenging. But in aggregate they took a lot out of me. The heat above ground also didn’t help. Only once did I encounter a bat. The startled creature flapped about for a few seconds before darting away. My greatest fear involved standing up into a ceiling full of sleeping bats. Luckily this never occured!

After powering through all the caves along the main “Cave Loop” and near the visitor center, I visited the Merrill Cave, off on its on elsewhere in the park. This cave gained fame for hosting a year-round subterranean ice pond, where visitors used to go skating. Metal stair cases and cat walks allow visitors to descend deep into this complex, down multiple levels towards the old ice rink.

The air was delightfully cold down here. Like “see your breath and huddle and shiver” cold. That said, any hints of ice were long gone from this cave as of August. Yet another victim of climate change.

A great day at a hidden gem

Overall I was incredibly pleased with Lava Beds National Monument. Like many NPS-run locales that fail to gain the coveted “Park” designation it had ample sights and sounds to take in, with minimal crowds. I saw perhaps two dozen people in the park—all of them friendly and a bit introspective. There were no large groups, no pods of teenagers on cell phones, no tour buses or people being loud or rude. Anyone visiting had to have driven at least an hour out of their way, just to experience a geological oddity. But I think we all agreed it was worth the effort!