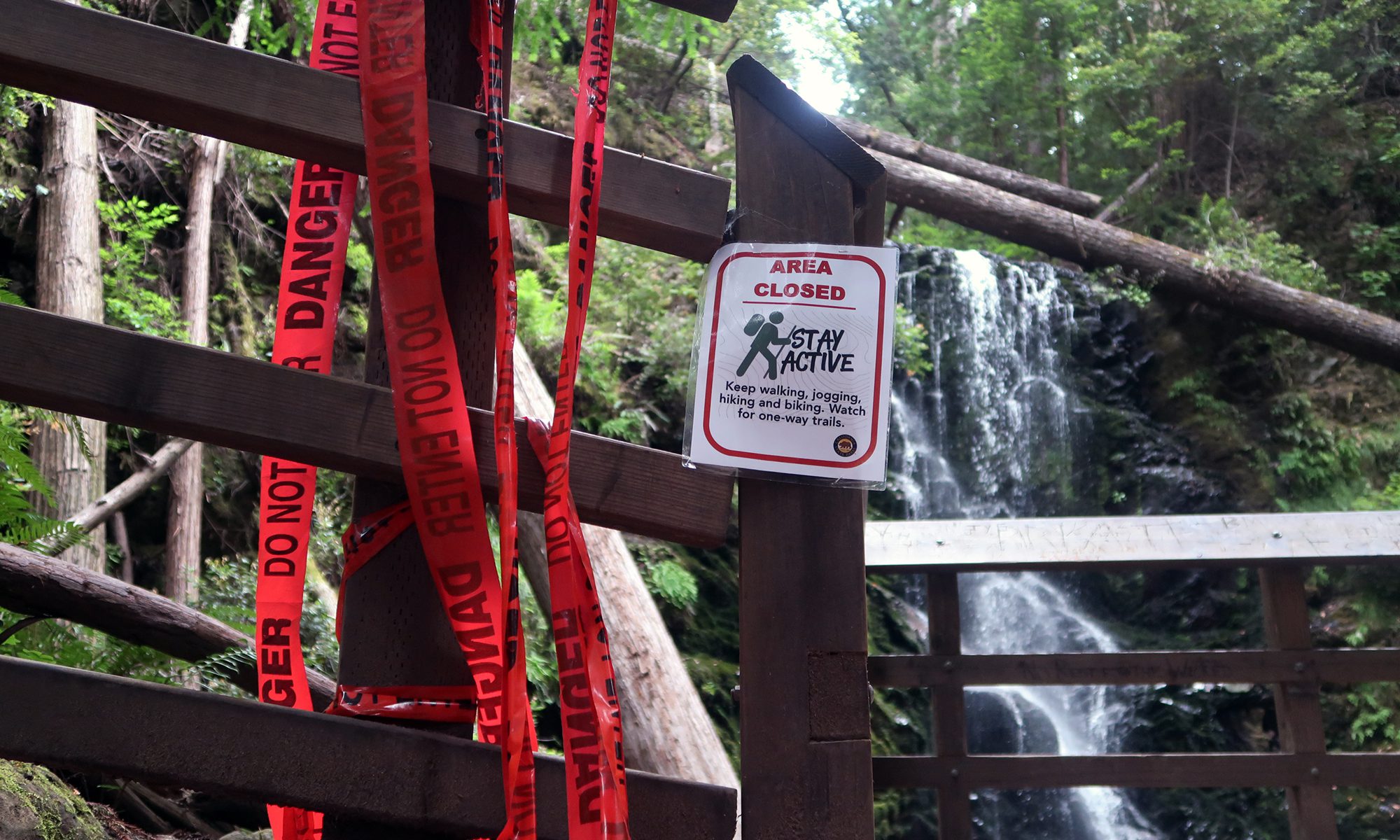 When I arrived in California to start a new career in Spring 2020, I immediately asked my co-workers for hiking tips. The Berry Creek Falls loop came up numerous times as a top recommendation for hiking in the area. The trail sits in Big Basin Redwoods State Park, California’s oldest such park.

Unfortunately, this account from early June may represent a eulogy for the trail and the park, rather than a recommendation. The very heart of Big Basin SP suffered severe damage from wildfires this summer, as has much of California and the broader forested areas of the west coast.

Wildfires were not the only powerful force working to limit access to Big Basin in 2020. When I arrived in June, the park had only recently reopened from the COVID-19 pandemic. Part of that reopening involved a system of one-way trails, to promote social distancing.

I arrived around 7 am, late by my standards, but apparently the first vehicle to arrive that day. It was unclear how to pay for parking (the drop box was sealed off and the office was closed). As more cars streamed in, I decided to just start hiking and deal with parking later.

Signs of fires past

The trail climbed over a few ridgelines and hewed its way along a few stream beds. The entire time, it remained under a welcome canopy of massive evergreens (many presumably the park’s namesake redwoods!). Both the treetops and forest floor were filled with greenery, and the creeks were still filled with running water. That said, the scene was certainly not “lush” by East Coast standards.

I passed many towering redwoods en route to the falls, particularly early on when leaving the parking area. I found it fascinating that a seeming majority of the trees had hollowed out bases … many charred by clear signs of prior fires. I found it fascinating to consider how many natural disasters these many-hundred-year-old trees have witnessed and endured. It also makes me hopeful that a good number of them will ultimately endure these latest fires as well.

The trail rises roughly 300 vertical feet from the park center, before slowly giving away 1000 vertical feet to its low point at the namesake falls. The slow decline in altitude over several miles made for fast pleasant walking. And before long, I found myself in sight of the signature attraction.

Here at last was a truly lush landscape. The modest volume of water cascading over the falls crashed over several minor rock ledges. And the midst created in this process seemed to sustain a rare, moist ecosystem for moss and lush greenery. The whole scene sparkled in the morning sunlight peaking through the trees above. It was gorgeous!

The park had built a nice wooden viewing platform where the trail approaches the falls, complete with seating and handrails. The platform had apparently been taped off amidst the recent pandemic, but recent hikers had removed the tape regardless. That said, I could hear a few other early risers down the trail, so I didn’t linger too long.

The loop trail continued past the falls beginning with a rapid climb out of the ravine. Shortly after beginning this ascent, I ran into some bright yellow, slimy creatures on the trail: banana slugs!

Banana slugs are the official mascot of nearby UC Santa Cruz. Asides from their bright color, they’re also pretty huge by mollusk standards. Having only recently moved to California this was my first encounter with this West Coast detritivore. From my brief research on this creature, I’ve learned that the details of banana slug intercourse are both astonishing and harrowing. And that this critter with a very loyal following even has a theme song.

The second half of the loop continued for a few miles up and down over minor ridge-lines. Eventually, I made it back to the final ridge where the loop merged back towards the parking area. But instead of dropping back down to the car park, I headed up an old roadway on a trail labeled “Ocean View Summit”.

As the trail climbed further, the trees and shade gave way to sun and scrubby bushes. Whereas the Berry Creek Trail was growing crowded this mid-morning, the Oceanview path was still mostly devoid of foot traffic.

Eventually, I reached the summit, where there were indeed partially unobstructed views towards the Pacific. That said, with the limited seeing distance and thin clouds, it was difficult to tell where the sky ended and where the ocean began.

I then backtracked to the main trail and continued back to the trailhead. It had been a high-mileage morning in Big Basin State Park. Here’s hoping the park manages to rebound soon following these latest fires. If so, I look forward to returning to witness the regrowth in action.