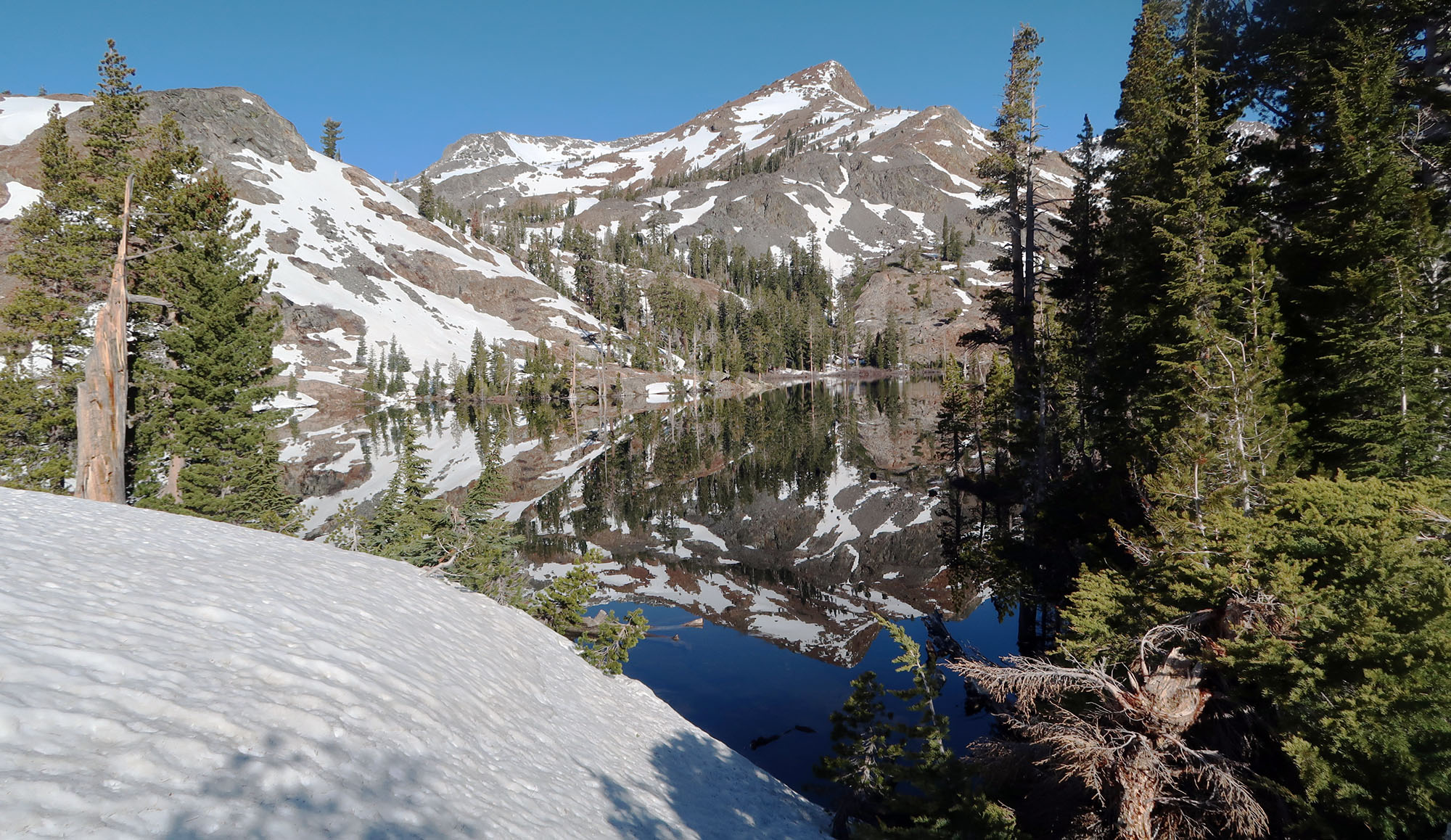 In late May, having settled into my new apartment in the Bay Area, I decided to set off on a backpacking adventure. This trip would represent my first wilderness adventure in California.

I decided on a stretch of the Pacific Crest Trail near Lake Tahoe through the Desolation Wilderness. From the name alone I knew this would be some sort of adventure.

I set off down the trail, past my very first PCT trail marker. Reading Wild by Cheryl Strayed had a big impression on me in my younger days. It felt auspicious to be traveling along the famed PCT, through a stretch that Cheryl may or may not have hiked.

The trail began with a roughly 2 mile stretch along the northern shores of Lower and Upper Echo Lakes. This portion sits on non-wilderness land, and passes by a bunch of seriously nice lake houses. As of late May, it was also the only stretch completely devoid of snow.

After some real estate voyeurism, the trail begins to ascend some large, mellow switchbacks, climbing up towards the wilderness area. From here hikers were enjoying sweeping views of the lower elevation lakes they just passed.

Just before entering the wilderness, a dog ran up and bit me hard in my right calf. This didn’t hurt so much as shock me. The couple who owned the dog apologized profusely, claiming it had never happened before. I was … skeptical of that. At any rate, I applied some Neosporin—the dog had penetrated not only by gaters and pants, but also my skin!—and pressed onward.

Lake of the Woods (unintentionally)

This hike involved a lot of lakes. After entering the wilderness area, the trail climbed to a col between some mellow peaks. As I gained altitude, the snowpack slowly took over the entire landscape. Footprints led off in many directions through the sparse pine forest. At some point, I lost the trail.

A little while later, I was descending through the thin woods, following some random footprints. Back east, “bushwacking” was always a very slow, laborious pursuit. But here in the Sierras, with open forests and a thick blanket of slushy snow, it proved just as easy as trail travel.

Eventually, I came to a mostly-frozen lake. According to my map, cached on AllTrails, this was “Lake of the Woods”. Near the shore, ice and open water revealed clear, blue, rocky depths beneath the surface.

Thoughts on Wild and Sierra snowpack

I soon found a different trail, along the lakeshore. This eventually led me back towards the PCT and, finally, Lake Aloha. I remember reading reading Wild and Cheryl Strayed constantly complaining about snowpack in the Sierras. The winter before this hike I spent a ton of time snowshoeing through the Adirondacks. After 17+ mile days through packed, fresh snow, I felt great. I came away thinking Cheryl was exaggerating about how arduous snow travel is.

Well, I now know that spring snowpack in California is very different than winter snowpack back East. For starters, it’s slushy and thick like molten concrete. And the ambient temperature is roughly 70 degrees midday. Add to this the lack of thick tree cover and intense sunlight. And the altitude. After about 11 miles of hiking that day, I realized Cheryl was right. Summer snow kind of sucks a lot.

Finally, I reached the vast expanse of bare rock and water known as Lake Aloha. The Desolation Wilderness takes its name from this vast, central bowl of bare peaks and endless small lakes. Trees are few and far between. In summer, the snow melts to reveal bare rock and dirt. I found it a truly alpine experience.

The trail along the shores of the lake went on for a mile or two. This section was roughly flat. But the endless snow and beating sun made the trip a bit of a chore. I realized how much I missed trees!

Losing the trail (again!) and setting up camp

I feel the need to mention yet again how incredibly easy it is to lose the trail when traveling through snowpack near tree-line. I recommend always caching a trail on your phone (e.g. in AllTrails), to avoid getting seriously lost. Map and compass skills are also pretty useful.

At any rate, a few lakes later, I lost the trail again. This happened near another smaller lake called Lake Susie. My original plan involved hiking a couple miles further to Lake Gilmore, near a tall summit with views of Lake Tahoe. So many lakes!

But the day had worn me thin. It was my first time hiking with a full pack in over a year. The altitude was also getting to me. The day grew late. I stumbled upon on a patch of flat earthen ground in the sun, nowhere near a trail. The views were stunning. A large brook babbled nearby. This was a pretty excellent spot to make camp.

MountainForecast.com claimed the overnight low would be around 45 degrees that night. So I brought my 34 degree sleeping bag. This was a mistake. The temperature definitely dropped below freezing because the next morning everything was covered in frost. And that night I tossed and turned and shivered in my bag.

The next morning, tired and exhausted from all that snow travel, I decided to cut my trip down from two nights to one. I packed up camp and headed back towards Lake Aloha and on to the trailhead.

The morning back track was somehow even more beautiful than the prior day. Lake Susie in particular sported some spectacular placid waters.

The temperature rose as I reached the higher elevations of Lake Aloha. I decided I was definitely done with snow for a few months. This hike wasn’t optimal. I didn’t summit any mountains. And I cut short the trip both in terms of time and mileage. That said, it was definitely a stunning landscape. I looked forward to visiting again at some point. But definitely without snow.