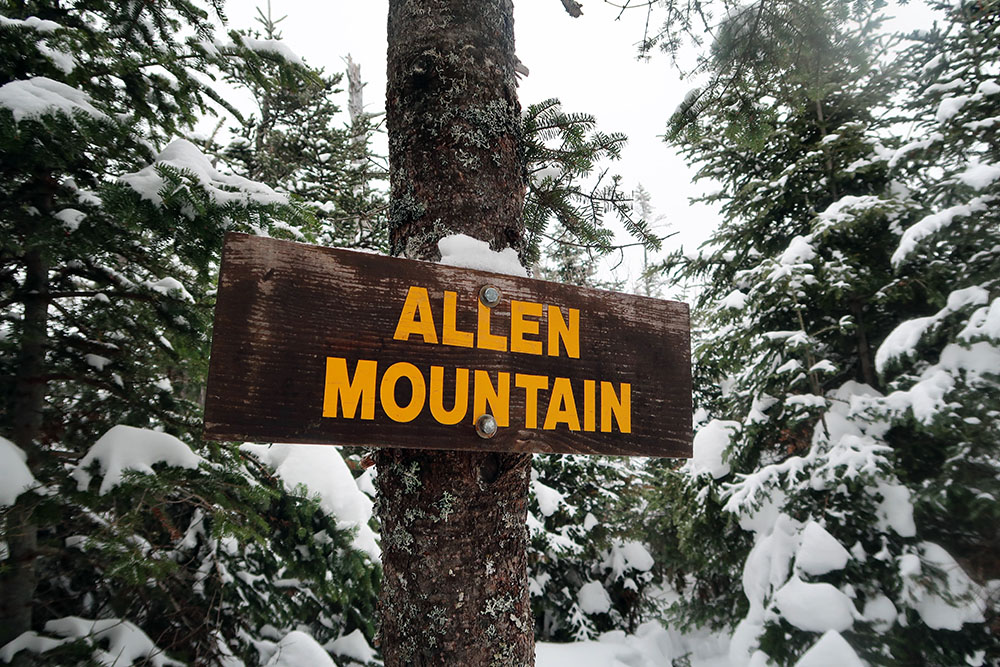 Putting off Allen for the bitter end is one of the time-honored traditions of High Peaking.  According to the Adirondack Mountain Club’s official roster of 46ers, Allen spent decades as, far and away, the most popular last ascent.  Only after the 1980 Winter Olympics did Whiteface replace Allen as a more pleasant (and ceremonial) finish.  To understand why folks are keen to procrastinate in bagging Allen, one need only look at the stats. Allen requires an 18-mile round trip through brush and bog to bag just one lonely, tree-covered summit.  No other peak requires such an enormous minimum amount of mileage.

In fact, my attempt on Allen came slightly earlier than originally planned.  I had envisioned bagging it third-to-last, leaving just Esther and Whiteface as a final victory hike.  But the more I researched this hike, the more I grew nervous about water crossings. In particular, storm runoff recently destroyed the Opalescent River’s cable bridge.  This has left hikers to take their chances crossing ice over somewhat deep, running water.

And so, following two weeks without a single day above freezing, I decided to attempt the infamous Allen.  With any luck, water levels would be low and ice frozen solid.

Over some rivers and through a lot of woods

I signed in at the trail register at 5:40 am, setting off through into the woods in complete darkness.  A moment later I came to the first crossing of the day: a steel cable bridge over the Hudson River. The bridge leads both to Allen Mountain and the Mount Adams Firetower (the official, DEC-sanctioned purpose of the trailhead).  This is currently the northernmost suspension bridge spanning the mighty Hudson. And at perhaps 50 feet in length, it stands in comical contrast to the nearly mile-long George Washington Bridge (the southernmost crossing of the same river).  The bridge leaned at a bit of an angle but seemed in relatively solid shape.

The first seven miles of the journey are relatively flat-to-rolling, winding around a few lakes and foothills.  Much of this trek takes place along old logging roads, and taller mountains come in and out of view along straight stretches.  There’s not much to complain about here, except I got the sense it’s a much more buggy, muddy experience in summer.

After a few miles, I came to the Opalescent crossing.  The mangled remains of the former cable bridge sat smashed on its western shore.  And let me be clear: this looked like a pretty serious bridge. Steel cables were bolted down into massive glacial erratics, with thick beams of treated hardwood forming the bridge’s cross bracing.  The span likely sat a good 10 feet above standard water level. I can’t imagine what sort of violent event led to its untimely demise (the wood looked relatively new).

After ascending perhaps 500 vertical feet you descend back down a ways towards Skylight Brook.  This is the most significant “pointless up and down” (PUD) of the journey, and it’s really not too terrible.

After a brief, gentle descent, the trail crosses Skylight Brook not once but twice. Here there are some decent campsites along with a pit privy. From trailhead to summit, this privy represents the single best opportunity for taking care of business on this adventure. So take note.

Skylight Brook is markedly smaller than the Hudson or the Opalescent. On this cold February morning, the brook felt quite safe to cross, despite some openings in the ice. I’m not an expert, but I think snowshoes help avoid breaking the ice, because Pressure = Force / Area.

The trail then followed Skylight Brook northward, and here the ascent of Allen Mountain finally begins! After miles of open grassy fields, logging roads, and piney marsh, the trail finally turns to a classic Adirondack hillside of hardwoods and pines. Sadly, this “happy medium” of gradual ascent through dry forest lasts a mere half mile.

Finally, a whopping 8 miles into the day, I reached Allen Brook, and the ascent began in earnest. Multiple feet of wet, heavy snow covered the ravine and coated pine trees that sagged under the weight. Blue-hued frozen waterfalls poked through the pure white snow along steeper portions. And endless blowdown blocked any clear line of sight up the brook.

The ascent began steep and continued steeper. But deep snow, a well-packed trail, and heel locks on my snowshoes meant the climb was more or less pleasant and involved essentially no scrambling.

I ascended mostly into clouds. I obviously prefer to see breathtaking views from every 46er summit. But that said, I find a foggy summit oddly serene and beautiful. It becomes a more intimate experience between you and the mountaintop. Allen’s upper reaches featured delightful winter berries and patterned hoarfrost on trees and branches.

Towards the summit, the slide finally opened up allowing some lateral views. Endless pines disappeared along a curved ridgeline into the mist. Looking up through the bare slide, I realized just how steep the ascent had become.

Having gained the slide, the trail makes one final ascent through boreal conifers towards Allen’s mostly wooded summit. I arrived around noon, 6.5 hours and nearly 9 miles into my day, having seen exactly zero other hikers.

I dropped my pack atop the summit and pulled on some heavier layers. I scarfed down a delicious half bagel with chicken salad atop the summit and took some lovely sips from a hot thermos of drink mix. Then I knew it was time to do the whole shebang in reverse!

Glissading is a perfectly valid mountaineering technique for efficiently descending a snowy slope. It’s also really fun. To do so, simply sit on your butt, and slide. You can use an ice ax or trekking pole to steer and manage your speed. And glissading in full crampons is a no-no.

The steep, well-packed trail down Allen Mountain, covered in about a foot of fresher snow, created the perfect venue for the ultimate Adirondack Butt Slide. It took me maybe 15 minutes to descend over 1000 vertical feet. I zipped past trees and out across the upper slide, then down towards the ravine of lower Allen Brook.

I then passed three buddies from Quebec who had cross country skied to the base of the mountain. They represented my only human contact that day. The trio had brought small plastic butt sleds with them. I warned them this could make the descent perhaps a little too fast! But I imagine they had a lot of fun.

The long and winding road

After all that, there was still the matter of getting back to the car. Seven miles of rolling hills, logging roads, and stream crossings still awaited me. These miles were more or less harmless if a bit of a death march. All part of the Allen Mountain experience.

Eventually, I found myself back along the shores of Lake Salley. And then a daylight crossing of the quiet and peaceful Lake Jimmy. Then I crossed over the Hudson, once more, and back to the car. Allen Mountain, in the books.